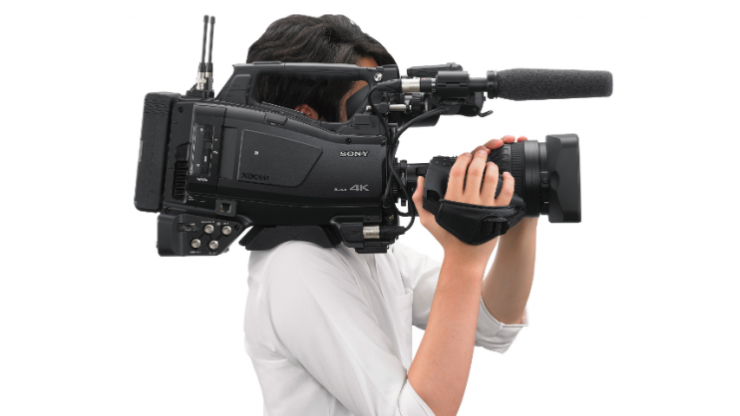 Sony has officially announced the PXW-Z750, which they claim is the world’s first 2/3-type shoulder camcorder to support native 4K shooting with a 3-chip CMOS Global Shutter sensor system. The latest member of the XDCAM family has been designed for news and live production applications including sports broadcasting, live television and documentary shooting.

This camera was actually first shown at BIRTV in Beijing last month.

The Z750 can be fitted with a variety of B4 ENG lenses, including 4K or HD lenses. This flexible lens option supports a wide range of shooting applications while saving money for production houses and broadcasters who can leverage existing lens investments.

2/3″ B4 mount ENG and EFP cameras are not as popular as they use to be, but there are still a lot of segments in the market where they are the right camera for the right job.

“The PXW-Z750 sets a new benchmark for TV reality shows, documentaries, news and sports production. In fast-moving applications where capturing a second shot is not possible, the Z750 is the ideal choice.”

The camera has an 8.8 cm (3.5 in) diagonal 16:9 built-in LCD screen. It has all the input and outputs that you would expect on a professional ENG camera, including 12G SDI and four-channel embedded audio.

The Z750 weighs approx. 3.8 kg (body only, no lens, viewfinder, microphone), and Sony claims that a BP-GL95B battery will allow for up to 100 minutes of continuous run time.

As far as slow motion is concerned, the PXW-Z750 can record up to 60fps lens in UHD and 120fps in HD. This makes it suitable for sports and nature shows.

The camera also has an Advanced 4K and HD Cache Recording mode.

The camera is compatible with Sony’s DWX series of digital wireless microphone systems, the PXW-Z750 provides ENG and documentary teams with all the benefits of a full digital audio workflow, including powerful end-to-end encryption for truly secure operation.

The wireless transmitter parameters can be controlled directly from the PZW-Z750. The transmitter power save mode is synchronized with the camera’s on/off control and is controlled by an assignable button to save the transmitter’s battery life.

The receiver RF level is also displayed in the viewfinder.

There is no current indication of pricing, but the camera is expected to become available in February 2020.