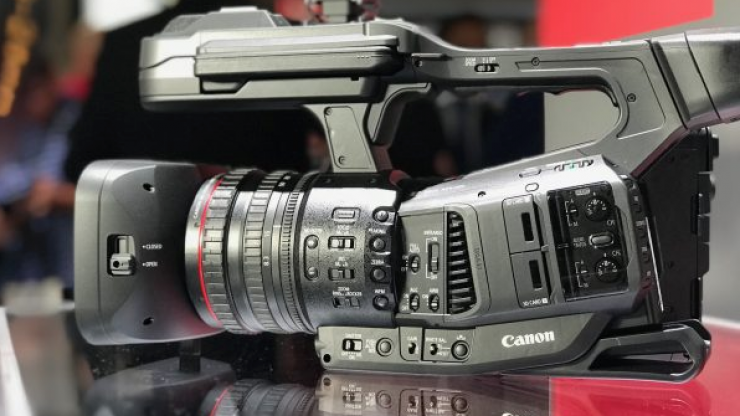 With the push towards larger sized sensors, I was keen to find out if there is still a demand for fixed lens Pro Camcorders with smaller sensors.

All the big manufacturers, Canon, Panasonic, and Sony are all still investing heavily in developing fixed lens Pro camcorders. Some of these cameras offer 4K UHD recording at up to 60p in 4:2:2 10-bit as well as the ability to shoot in codecs and resolutions that are quick and easy to turn around for broadcast applications.

We have all heard the phrase ‘Right tool for the right job“, well the right tool may just be a fixed lens camera depending on what you are doing. Choosing to use an S35 or full-frame sensor camera with interchangeable lenses isn’t going to be the right choice for everyone.

We are also starting to see a trend where some news broadcasters are abandoning larger ENG cameras and instead choosing smaller, lighter, and more affordable cameras. I wanted to find out why this happening.

To do this, I reached out to Larry Thorpe from Canon to ask him some questions. Larry has been in the industry for longer than most of us have been alive. He started at the BBC in 1961, worked for RCA for 16 years, Sony for 22 years, and for the last 15 years, he has been at Canon. As someone who has seen all of the major changes in our industry over the last 50 years, Larry is able to offer a good perspective.

Are you seeing a trend of news stations transitioning from large, heavy ENG cameras to lower cost and smaller camcorders?

Yes — a definite trend here. Driven by cost-efficiencies and a desire to have many more newsgathering cameras (more affordable!) out in the field.

Have the advances in technology gotten to the point where a lower cost Pro Camcorder can offer almost as good quality as a traditional ENG camera?

Traditional 2/3-inch camcorders still win on sensitivity and signal to noise. That is why they publish traditional full-broadcast performance specifications that most low-cost camcorders do not. Interchangeable lenses still are central to a great deal of newsgathering, especially at the broadcast network level. They are also of higher optical performance.

There are a lot of local news stations that are now using VJs who need to shoot and report themselves. What type of features are now getting put into smaller cameras to accommodate their needs?

There is an ever-increasing demand for lower cost, live-streaming solutions. What is Canon doing to meet this need?

We have added Ethernet functionality to our lower-cost professional camcorders, such as the Canon XF205 and XF705 camcorders that support 1000BaseT

We have seen a big push in recent years towards larger sensors, is there still a big market for Pro and Prosumer camcorders?

Yes, there is. While 2/3-inch still dominates the very high-end, the smaller 1/3-inch systems have proliferated. More recently, the major camera manufacturers (including Canon) are offering single-sensor 1.0-inch camcorders with integral lenses. These form a “halfway” point between the Super 35mm camcorders and the traditional small-format systems.

Almost every camera we seeing being released these days is 4K capable, but in broadcast, HD is still the de facto resolution. How important is it to still make sure that manageable sized codecs and HD resolutions are still included in cameras?

Very important. Broadcasters seek long-record durations on lower-cost media and that must be supported by increasingly efficient codecs. Canon was the first to implement the HEVC codec in a professional broadcast camcorder for this very reason.

Also important to note that the major camcorder and camera manufacturers are making their products multi-format, offering both 4K and HD. This helps the protracted transition from HD to 4K.

What are the benefits of using a fixed lens, smaller sensor camera?

The manufacturer can do an optimized optical linkage between the optical system and the image sensor that can benefit resolution, lowering of chromatic aberration, and enabling auto focus.

There is a perception that Pro and Prosumer camcorders couldn’t possibly be as good as any of the S35 or FF cameras. With the latest technology, are Pro camcorders getting to the point where they are now starting to bridge that gap?

The pace of technological advances in S35 and full-frame cameras continues to accelerate with ongoing enhancements in lenses, image sensors, and recording capabilities. While the same is taking place in Pro camcorders, the gap between the two continues.

The new, low-cost Pro camcorders are replacing traditional 2/3-inch, 1/2-inch, and, 1/3-inch interchangeable lens camcorders. The latter has been used for decades by broadcasters for news, documentary and general field production. Now the new 1/3-inch and 1.0-inch Pro camcorders are steadily displacing them because they have become very competitive in image performance and operational features.

Where are the emerging markets where Canon is seeing the most growth for camcorders?