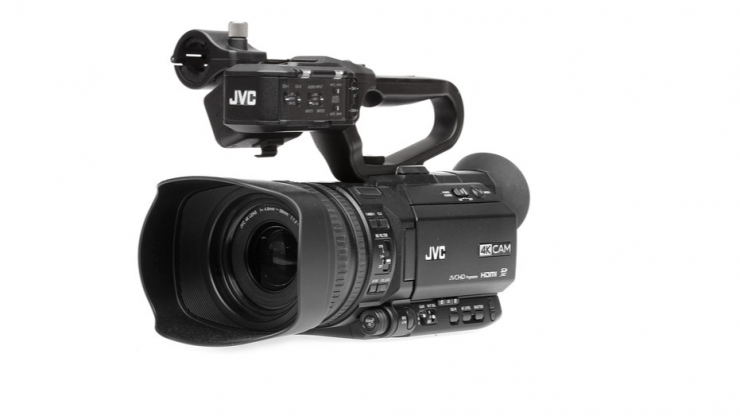 According to JVC, the GY-HM250 the first fully integrated Facebook Live professional camcorder in the industry. It is interesting that we are now starting to see a trend where social media integration is starting to find its way into prosumer products.

Connecting with Facebook Live is as easy as pairing the camera with a Facebook account. Any pages setup in Facebook will then appear in the camera’s viewfinder. Live streaming is initiated from the camera by simply clicking on the user’s timeline. While streaming to Facebook Live, users can also record video to dual SD memory cards.

In an effort to provide better security for live video content, Facebook Live recently made a change to its platform requiring all streaming video to use secure RTMPS protocol. With the upgrade, the new Facebook security protocol is fully integrated within the GY-HM250 family, including the GY-HM250U base model, GY-HM250SP with sports graphics and Sportzcast ScoreBot and ScoreHub integration, and the GY-HM250HW with house of worship graphics.

“The GY-HM250 camcorder family was designed with built-in streaming, built-in graphics, and XLR audio connections – so one camcorder can create a complete production for sports, worship, and news coverage. No other camera on the market makes it this easy to connect with Facebook Live and deliver professional audio and video results.”

Along with Facebook Live Streaming capabilities, the GY-HM250 also offers lower-third and full-screen titling solutions for recorded or streamed video output without an external CG or production switcher. The camera also lets customers upload logos and icons for customized graphics.

The GY-HM250 includes a 1/2.3-inch BSI 4K CMOS imager, as well as an integrated 24x dynamic zoom lens with optical image stabilizer and tele macro shooting mode. It records in a variety of file formats and frame rates, including 4:2:2 recording for 4K/30p and 4K/24p. Other features include dual XLR audio inputs, integrated handle with hot shoe and dedicated shotgun mic mount, viewfinder and LCD displays, and 4K/60p HDMI output.

For me personally, I think a camera like the $,1,749 USD JVC GY-HM250 makes much more sense as a Vlogging camera than any mirrorless or DSLR camera.