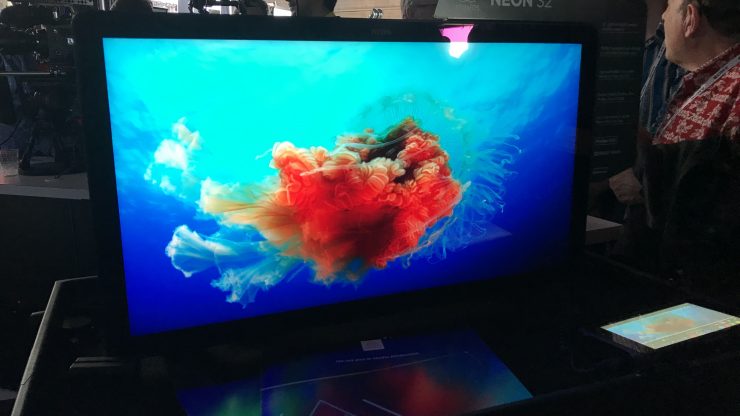 Atomos has just announced that the Neon cinema series of monitor-recorders announced at Cine Gear 2019 can be upgraded to record 8K video up to 60 fps in both ProRes & ProRes RAW.

We are blown away by the 8K ProRes RAW video recorded with the new Neon Cinema Series monitor-recorder. The detail is incredible, with enough resolution to reframe for 4K and 6K and even enable virtual multi-camera angles from one shot. And the RAW camera sensor data available makes ProRes RAW the ideal format for HDR workflows.

The announcement is timed with the new Apple Mac Pro where they also mentioned the Afterburner, an accelerator card that enables playback of three streams of 8K ProRes RAW video simultaneously.

The Afterburner features a programmable ASIC capable of decoding up to 6.3 billion pixels per second. With Afterburner, video editors using high-quality cameras that require the conversion of native file formats into proxies for easy editing can now use native formats right from the camera and decode up to three streams of 8K ProRes RAW video and 12 streams of 4K ProRes RAW video in real time.

No word on how much the Afterburner will cost.

The 8K Master Control Unit Upgrade will be required to record 8K.

You can learn more about the Atomos Neon Monitor-recorders in our first look coverage at Cine Gear 2019.