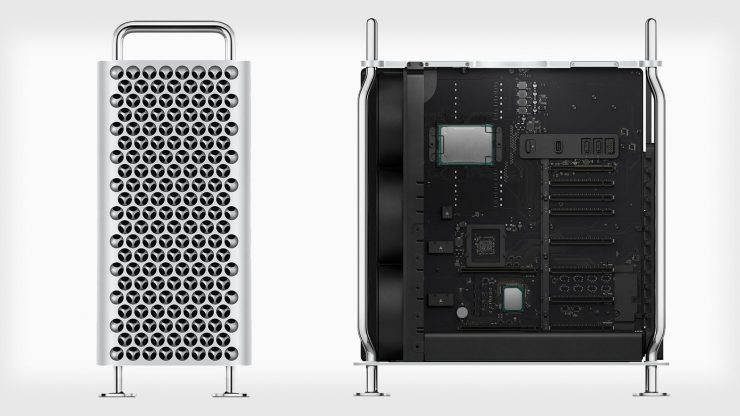 It’s been a long time coming and today Apple finally unveiled the all-new Mac Pro and yes it’s a tower, not a trash can. Here is what we know and it looks to be a beast.

With the all-new tower design, the new Mac Pro is very upgradable with eight PCI express slots. Two MPX Modules or up to four PCI Express card slots. I think it’s a huge improvement over the old cylinder design.

Apple has new hardware called Afterburner. It is an FPGA based accelerator. It will make the Mac Pro capable of playing three simultaneous 8K RAW video streams, or 12 4K streams. The card is capable of processing 6 billion pixels per second. Impressive

Apple’s new hardware will bring a mind-blowing level of performance to Metal-accelerated, proxy-free R3D workflows in Final Cut Pro X that editors truly have never seen before. We are very excited to bring a Metal-optimized version of R3D in September.

Alternatively, each MPX bay can support:

With up to 28 core Xeon processors, 56 teraflops of graphics performance and the new Afterburner card, the new Mac Pro delivers performance that will accelerate pro workflows. A number of pro app developers are seeing impressive results in a single workstation.

Turbo Boost up to 4.0GHz

To keep it cool the new Mac Pro has three big and quiet fans to push air through the tower. On the opposite side, a blower pulls the air across the memory, storage and through the power supply, exhausting it out the back of the computer. Apple claims the fans are no louder than the iMac Pro.

To go with CPU horsepower the new Mac Pro also can be packed full with 12 user accessible DIMM slots for up to 1.5TB of Ram.

The new Mac Pro looks to be a beast and for 8K and heavy compositing and graphics work the new system is very upgradable. Choose the options that meet your demands.
The base Mac Pro will be an 8-core Xeon CPU, 32GB of memory, a 256GB SSD and have the Radeon Pro 580X graphics card for $5999 and go up from there.

The new Mac Pro will ship this fall 2019. A rack mountable version will also be available. I’m certain it will be well in the $10K range or more if you go with the most powerful options however the beauty of a tower is being able to upgrade later and third-party vendors will soon be making its options for the new Mac Pro.

Apple has a one half-width slot for its I/O card. The card has two Thunderbolt 3 ports, two USB-A ports, and a 3.5mm audio jack. Also two ethernet ports.

The new Mac Pro can handle up to 4TB of SSD storage in these configurations. Up to 2.6GB/s sequential read and 2.7GB/s sequential write performance. Storage encrypted by the Apple T2 Security Chip.

Two Thunderbolt 3 ports plus two additional on the top.

Support for Thunderbolt 3 (up to 40Gb/s)

It’s great to finally see a system like this from Apple. I was starting to wonder if it would ever happen but as you can see Apple put a lot of thought in the new Mac Pro’s design and I would say stepped up to what users have been asking for. Yes, the price will be high but if you make a living with your computer you need to have upgradability and the new Mac Pro looks to be delivering what users want.

Does this beast of a computer have you wanting to get one? I personally like my iMac 2017 Retina 5K, 27-inch a lot and it’s serving me well but when the time comes I feel I can finally choose a Mac Pro again.

Apple also today introduced the Pro Display XDR monitor that equals the introductory price of the new Mac Pro. It’s $4999! Yes, that’s not a typo. In grand Apple fashion, the new true 10 bit Pro Display XDR comes with a lot of new tech but at a high price.

Pro Display XDR uses a direct backlighting system with a large array of LEDs that produce 1,000 nits of full-screen brightness and 1,600 nits of peak brightness, far surpassing that of a typical display.

With an advanced thermal system that uses its aluminum lattice pattern as a heat sink, Pro Display XDR can sustain 1,000 nits of full-screen brightness indefinitely, something that has never been possible before on a display at this price point. And with a 1,000,000:1 contrast ratio, images will have the brightest specular highlights, super dark blacks and all the details in between.