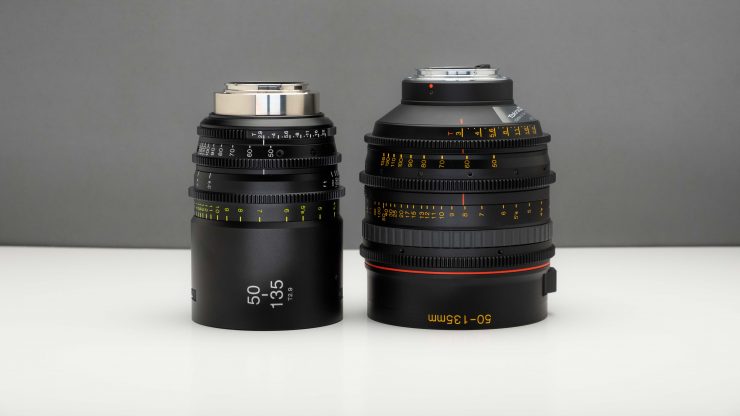 The original Tokina Cinema 50-135mm has become one of my favorite lenses. I shoot people delivering promo lines to camera a lot and having a portrait telephoto oriented focal length is a big plus. On the stills lens side, the Canon 24-105mm gets a lot of use. It’s a full frame lens so with approximately a 1.5x crop factor for S35 brings the lens to around 36-157mm and it’s F4 but that doesn’t matter too much if super shallow DOP isn’t needed. The 24-105 has its own issues namely it losses about a half stop when zoomed in at all f-stops other than f4. Not really a constant aperture.

The Tokina Cinema 50-135mm T2.9 MK II lens I have is a prototype however it doesn’t feel like it has any issues or is unfinished. It’s fun to play with new products before they are released but sometimes they don’t work quite right. I only have a few days with the 50-135mm MKII before I have to send it back so all you folks can see this exact one at Cine Gear Expo 2019. Luckily I had several shoots lined up and was able to get a lot of experience with the MKII.

Tokina made some nice improvements over the MK I. Most notable is the overall size and feel. The lens is lighter by a half a pound bringing the EF version to 3.37 lbs.

The mechanics are so much better with the all new metal mechanical housing. The focus, iris, and zoom have a buttery smooth dampening.

The MKII lens has industry standard 0.8 MOD cinema gears, and the Focus rotation is very silky smooth with a 300-degree focus throw. It’s damped but not overly so, making it a good fit for lower powered focus motors. Even the Tilta Nucleus Nano works. With the smaller size, the front diameter is now 95mm instead of 114mm and the front thread is 86mm. The newly updated 11-20mm also has a 95mm front.

Smaller, shorter, and lighter. Seeing is believing when it comes to the overall size of the Tokina Cinema 50-135 MKII. It really is a whole new design with the original optics.

The MK II has improved markings. The bright lime green is easier to see with the contrast of the white markings for distance. I like that the focus gears are now farther back so it’s not as crowded in the front when a matte box is used and lens support is attached.

The main differences from the MK I is the new metal mechanical housing and a new iris design. The optics are the same but have been optimized to perform better. Tokina was able to get the T-stop to T2.9 from T3. Not much brighter but I’ll take it.

Being parfocal is a big plus for a zoom lens. Most stills zoom lenses are not. While some might perform as one they are not true parfocal lenses designed to hold focus like a cinema zoom.

I tested the Tokina Cinema 50-135mm wide open, and it holds focus very well. I do find getting focus with a lens in this range more difficult. Depending on how far the subject is to the lens it can be tough to set. If the subject is wider and you want to focus on the eyes I have to use magnification and peaking to nail it. If you’re a tad off, it shows up when you pull out. It’s not the fault of the lens in any way but it is something as an operator to be aware of especially if you haven’t used parfocal zooms before.

The MK I does breath. Tokina did some tweaking and reduced it a bit. It’s not a big improvement. If the slip focus isn’t a big distance the breathing is much less distracting. I personally don’t have an issue with it since I don’t do a lot of long rack focuses. The lens has a close focus of 3.3-feet.

I like a little vintage flare sometimes but too much can be hard to control. The 50-135mm MKII has a nice look when lights hit the lens. The sample above is shooting straight up Broadway in downtown San Diego with cars in the background. I got some washed out areas that looked nice. The Bokeh is also delicious 🙂 The lens isn’t clinical and pushes to the warm side. I also appreciate that as cooler lenses are not my favorite.

The 50-135mm MK II was designed to match the mechanical and optical properties of the Tokina Cinema 11- 20mm T2.9 zoom. Both have the same front diameter, making them easy to work with when using a matte box. Both lenses in the series feature an interchangeable mount between PL, EF, Sony E, MFT, and Nikon F mounts.

I like the improvements to the Tokina Cinema 50-135mm MK II a lot. It looks and feels like a whole new lens and in a lot of ways it is other than the actual optics. While Tokina states less breathing I found that it still does show it but this is subjective whether it’s overly distracting or not. It did perform a tad better than the MK I so that’s good news.

I’m a former photojournalist, so using parfocal lenses is a very comfortable feel for me to shoot with. I can pop in, set focus, and frame up a shot and start rolling fast. You don’t lose that skill. The range is much less than a B4 2/3″ ENG zoom, but the technique is the same. Having a parfocal lens is a joy to work with.

Tokina as a cinema lens company has been growing. They have full frame options too like the Vista Prime Lenses, and it’s great that they are updating the zooms as well. Zooms come in handy when you need to work quickly with minimal lens changes. It’s not easy to design a fast zoom that doesn’t weigh 10 pounds. The 50-135mm MK II is not light at 3.37 lbs. however, it’s not a beast either.

Tokina Cinema is in an interesting position when it comes to affordable parfocal zooms. The Fujinon MK 50-135mm at $4000 USD is the direct competitor however you won’t have the mount options as the MK line at this time are not offered in PL or EF. On the expensive and lust side, the Angenieux Optimo Style 48-130mm T3 is a mere $24,499 USD.

If you’re going to Cine Gear 2019 make sure to check out Tokina booth and have a look and feel. I think you will like the improvements the MKII has. The Tokina 50-135 will be shipping in December 2019. Price hasn’t been locked in yet is however it should be approximately $3,499 USD.