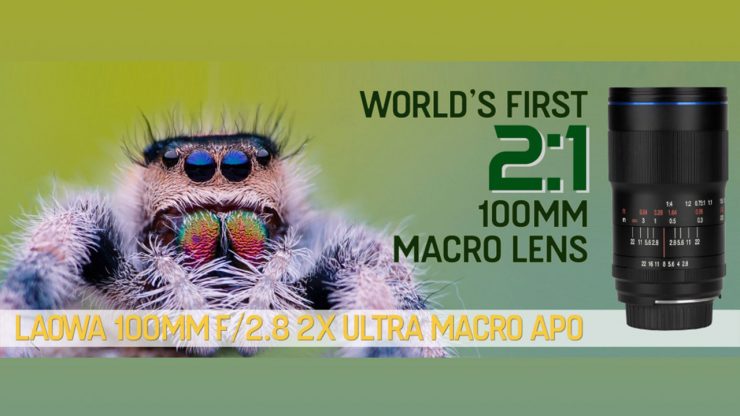 100mm is quite a popular focal length for macro lenses, however, the majority of 100mm macro lenses that are currently available only achieve 1:1 (life-size) or even smaller magnification.

Venus Optics have managed to keep the size and weight of the 100mm f/2.8 2:1 to a minimum. Usually a 2:1 macro lens is going to be a lot larger than a 1:1 macro lens, but the Laowa 100mm f/2.8 2:1 looks to be very comparable in size to other macro lenses with less magnification.

The optical design of the lens consists of 12 elements in 10 groups. Venus Optics claims that this enables a crystal sharp image at both macro and infinity distances. The bright f/2.8 and circular aperture is said to render softly diffused bokeh and isolates the subject from its background.

The lens has an internal focusing structure that will not extend when the focus is changed. A multilayer coating has also been applied to reduce lens flare and ghosting for increased contrast.

The lens is available in Canon EF, Nikon F and Sony FE mounts. The Canon version of the Laowa 100mm f/2.8 2:1 Macro lens is integrated with a CPU chip and aperture motor. This allows you to control the aperture and exposure through the camera and record the EXIF data into photos. A focus indicator will also be shown in the camera to assist focus. This new feature also benefits macro photographers when composing at smaller f-stop as the aperture will only close when the shutter is released.

Other 100mm f/2.8macro lenses that are available include:

Please note that all of these other macro lenses listed only have a 1:1 magnification.

The retail price of the new Laowa 100mm f/2.8 2:1 Ultra Macro APO lens will be $449 USD, however, pricing will vary in different countries.

This $449 USD price certainly makes the Laowa 100mm f/2.8 2:1 a very attractive proposition if you are in the market for a macro lens.

The lens is now available to order from Venus Optics authorized resellers and official website. Shipping is expected to start from late May onwards.