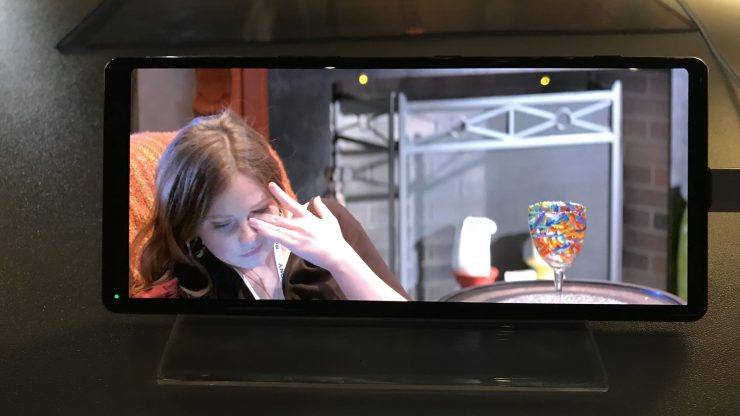 Sony has given a sneak peek of their upcoming Xperia 1 smartphone being used as a 6.5″ 4K OLED S-Log/S-Gamut wireless monitor for the Sony VENICE.

The images looked extremely impressive on the Xperia 1 and the latency was also very good. Whatever Sony have been doing the color accuracy of the images being displayed on the Xperia 1 looked almost identical to those being output from the VENICE to an expensive reference monitor.

Wireless monitoring on a smartphone is nothing new, but I haven’t seen 4K images being transmitted wirelessly to a smartphone before.

Currently, the VENICE can be controlled from a PC or Mac using a web browser and Ethernet cable. With V2.0, you can control Record Start/Stop, Assignable Buttons and Frames per Second, Exposure Index, Shutter, ND Filter, and White Balance. In Version 3.0, all menu settings will be supported. Nowhere does it mention anything about wireless capabilities. I’m not sure how Sony was transmitting the images out of the VENICE to the Xperia 1.

We first featured the Sony Xperia 1 on the site a few months ago. Sony claimed that the Xperia 1 is the world’s first 21:9 CinemaWide 4K HDR OLED display smartphone.

The Xperia 1 features a 21:9 (1644×3840) CinemaWide 6.5” 4K HDR OLED display that has the same aspect ratio as the cinema. Sony claims that a collaboration with CineAlta professional imaging engineers means it can reproduce colors as directors intended.

According to Sony, the 21:9 CinemaWide display allows you to watch compatible movies on Netflix in the same cinema aspect ratio as they were meant to be seen in. With more people tha ener watching content on smartphones, this is a fairly smart move.

The X1 for mobile engine brings BRAVIA 4K upscaling and HDR remaster technologies to the Xperia 1. Sony claims that streaming content will have more contrast, color and clarity.

This is a way of turning the 16.7 million colors from an 8-bit panel into the 1.07 billion colors that a true native 10-bit panel can display. 8+2 FRC uses various algorithms that flash 2 color tones very rapidly, thus giving the perceived impression of a third color that really isn’t there. This may sound like some sort of sneaky parlour trick, but almost all of the major panel manufacturers are now doing this. Atomos, SmallHD, Flanders, and even your 5K iMac display are all 8+2 FRC displays. 8+2 FRC panels are considerably cheaper to manufacturer than a true native 10-bit display.

The good news here is in reality, 8+2 FRC panels are almost impossible to distinguish from true 10-bit native panels. The only small difference is when it comes to viewing material that was shot in low light conditions at higher ISO values. On an 8+2 FRC display, the image will appear to show more noise than what an actual native 10-bit display will.

The smartphone gives you full manual control of shutter speed and ISO
and you can even do up to 30-second long exposures.

The Xperia 1 can record in 4K HDR, that Sony claims can be captured with exceptional dynamic range and contrast, and true to life colors, even in backlit scenes or low light.

This may be a bit of a stretch, but Sony claims that “You can record movies with the same parameters and color settings as the professionals.” By using expertise from Sony’s Digital motion picture camera engineers, the smartphone has LOOK color settings, a 21:9 ratio, 4K HDR and 24fps capabilities.

There are 8 different LOOKS available

The LOOK color settings is a collection of eight different color settings you can use to film in cinema style looks. One of these looks is actually called VENICE CS.

For storing your videos, the Xperia 1 has 128GB of UFS memory and microSDXC support (up to 512GB).

Sound to match the pictures

The Xperia 1 features Cinematic multi-dimensional sound from Dolby Atmos. This way you can watch your movies and also get a better audio experience.

The Xperia X1 is expected to start shipping in the northern hemisphere spring, but so far Sony hasn’t announced any pricing. It is probably safe to assume that it will cost at least $1000 USD.