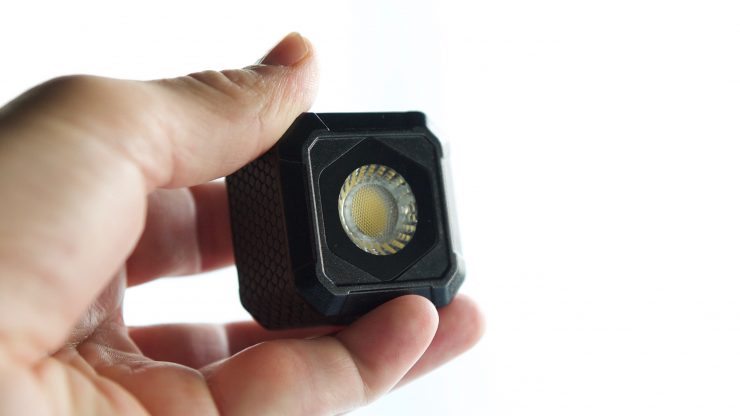 The Lume Cube AIR is a follow up to the original Lume Cube. It features a slimmed-down size, extra accessories, and it is versatile enough to be used for a wide array of applications. This new light certainly isn’t for everyone, but it looks well suited for use by YouTubers, vloggers, and the casual photographer/ videographer. It could even be used by serious shooters for adding light in to places where traditional lighting sources can’t go or fit. 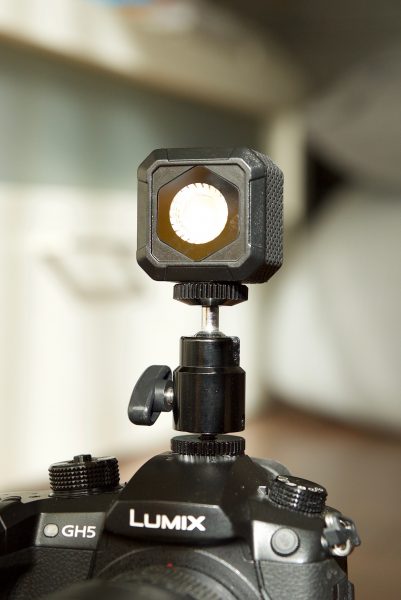 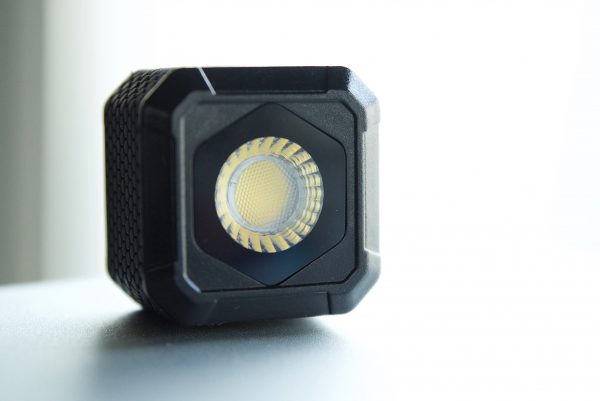 The light uses a COB LED light. The way a COB LED works is that multiple LED chips are packaged closely together to create one lighting module. The benefits of COB are increased brightness from a smaller lighting source, long lifespan, and they are very energy efficient. The downsides are they do run incredibly hot. 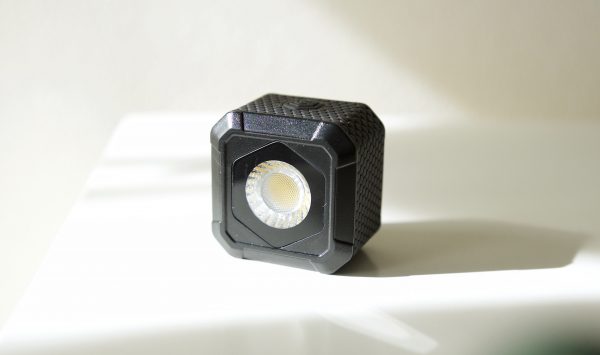 The nice thing about the Lume Cube AIR’s square shape is it is easy to place on tables and objects without the need to prop it up. The problem with a lot of small lights is that they can’t stand up by themselves on flat surfaces and need to be propped up or supported with something. With the Lume Cube AIR you can just place it down, turn it on and you are done. 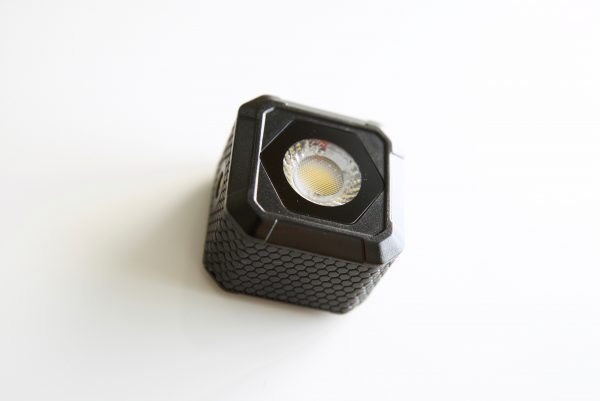 The Lume Cube AIR is solidly made and well built. Given its small size, you are likely to drop it on occasion, but even if you do, I don’t think it’s likely to break. The exterior of the light is made out of a hardened plastic with a rubberized grip surrounding it. The Lume Cube as a comparison is made out of aluminum. 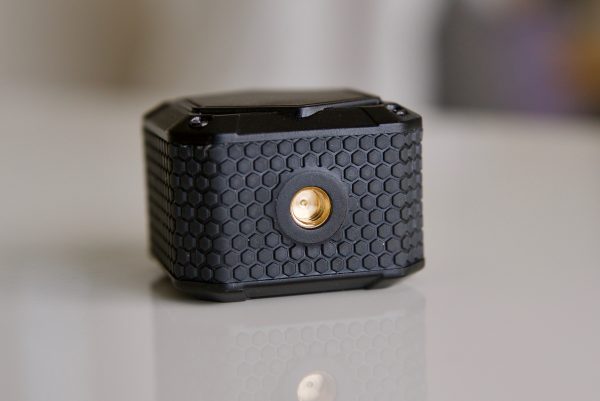 Being as small and lightweight, the Lume Cube AIR can be mounted in a variety of ways. Not only does it feature a  1/4-20″ thread for mounting to an arm or light stand, but there is also a built-in magnet so you can attach it to any metal surface. 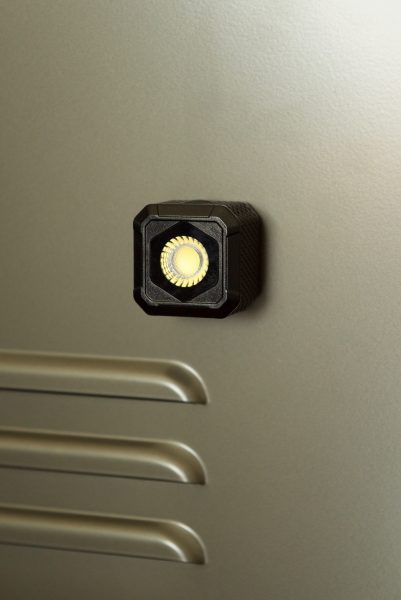 I really like the in-built magnet as it makes it very convenient to mount the light to a lot of objects quickly and easily. 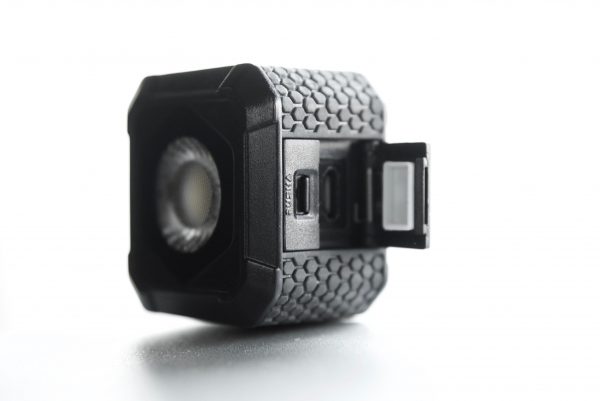 The Lume Cube AIR features an inbuilt rechargeable battery. This battery can be charged via the included USB cable. You can also run the light off a USB power bank if you need it to stay on for a long period of time. Lume Cube claims that the Lume Cube AIR will run for 2.5 hours when used at 50% brightness. I’m not sure why manufacturers quote runtime figures of products for use at half their output. It is much easier to give s a figure that says the light runs for this much time at full power. 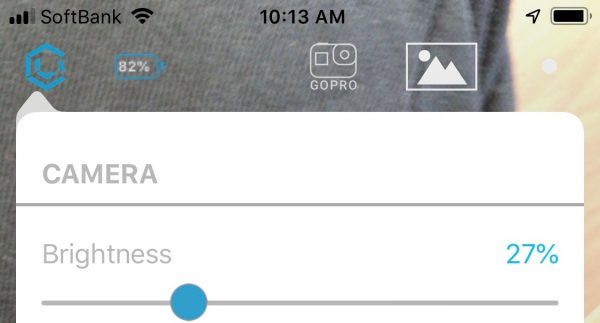 I found I got less than an hour when the Lume Cube AIR was being used at 100% output. As there is no physical battery indicator on the light itself, the only way you can check the battery life is through the Lume-X app. The battery life is displayed as a percentage. Now, I did find a bug here with the app. The battery figure was staying at 100% and not moving. It didn’t change until I made an adjustment on the app screen. It was showing 100% and then suddenly after I changed the brightness slightly it was suddenly showing 16%. 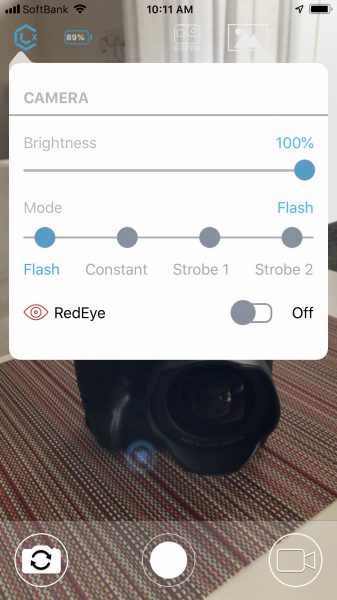 Just like the original Luma Cube, the AIR can be controlled via Bluetooth using the Lume-X iOS or Android app. This allows users to connect multiple Lume Cube AIRs to control brightness, light mode, strobe speeds, battery levels, and more.

The app is fairly basic, but it’s simple and easy to use. The only thing I didn’t like was you can’t turn the Lume Cube AIR on or off via the Bluetooth app.

Flash for your phone 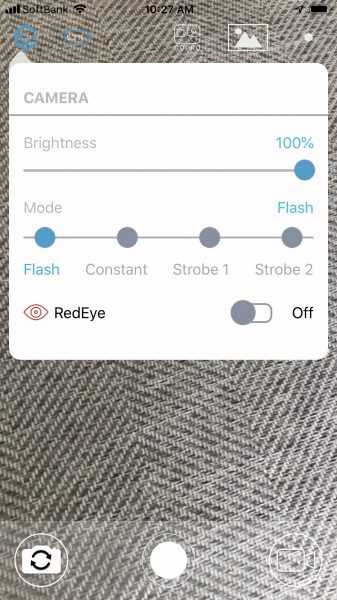 One of the nice bonus features of the Lume Cube AIR is that you can use it as a small off-camera flash for your smartphone. Now, you can only use this function through the Lume-X app, it can’t be done through your phones normal photo taking app. While the flash is not super bright, it is a lot stronger than the inbuilt flash on smartphones. I found it was a handy way to add a little bit of extra light when taking photos. 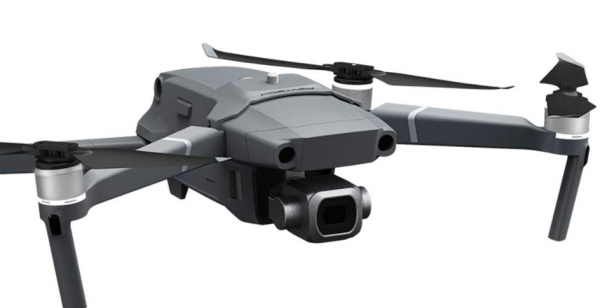 The Lume Cube AIR, just like the original Lume Cube is a nice solution for adding lighting to a small drone. By using a third party mounting accessory you can attach the Lume Cube Air to the top of a DJI Mavic Pro 2, or Mavic Pro 2 Zoom. In all honesty, this isn’t going to do too much unless you are flying a drone quite close to whatever object or person you are filming. What you could actually do is turn the strobe function on if you were flying a drone in low light conditions so it could be easily seen from the ground. 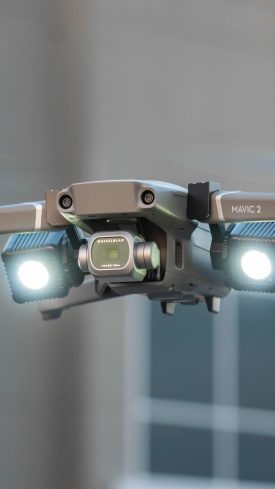 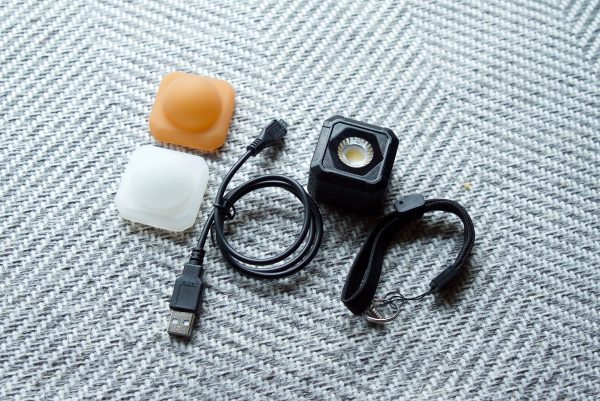 Included with the Lume Cube AIR is two diffusers (white and orange), one for diffusion and one for CTO correction. You also get a lanyard and charging cable. It’s nice that Lume Cube has included all these accessories for free. With the original Lume Cube all these things with optional accessories and not included. 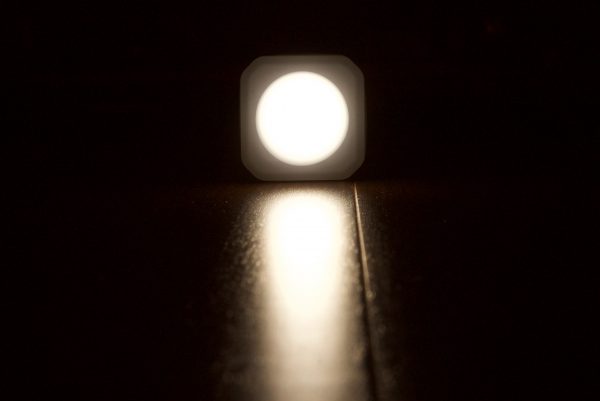 A big factor for a lot of people when buying a light is how much output it can produce. I tested the lights output using a Sekonic C-700 at a distance of 1m (3.28ft) in a controlled environment; you can see the results below.

Lume Cube claims that the Lume Cube AIR has an output of 400lx @ 1m. From my testing, I found that figure to be a little high. From my tests, I recorded an output of 335lx (31.2 fc) at a distance of 1 meter. This is a very good output for a light that is this small.

So what happens if you add the White Diffusion filter to the front of the Lume Cube AIR? Again I tested the light with a Sekonic C-700 in a controlled environment at a distance of 1m. As you can see from the above measurements the lights output dropped from 335lx to 126lx, a 62.38% decrease. None the less, the output with the diffusion filter was still impressive given the lights size. The White diffusion filter also widens the lights beam angle quite considerably.

The Lume Cube AIR also comes with what Lume Cube likes to call a Warming Filter. This is essentially a CTO correction filter which in theory should make the lights Kelvin color temperature close to 3200K. When I measured the light with the CTO filter it was 64.7lx, which is an 80.68% decrease in output over using the light without it. 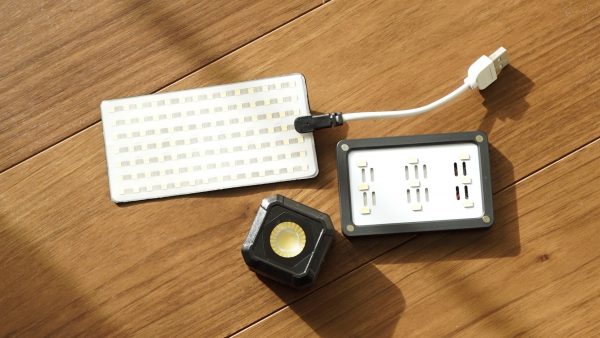 So how does this output compare against other small LED lights such as the Aputure Amaran and the Profound PanFlex Mini? Below you can see what those particular lights output at a distance of 1m.

As you can see, despite being the smallest of the three lights, the Lume Cube AIR had considerably more output than either the Aputure or ProFound. 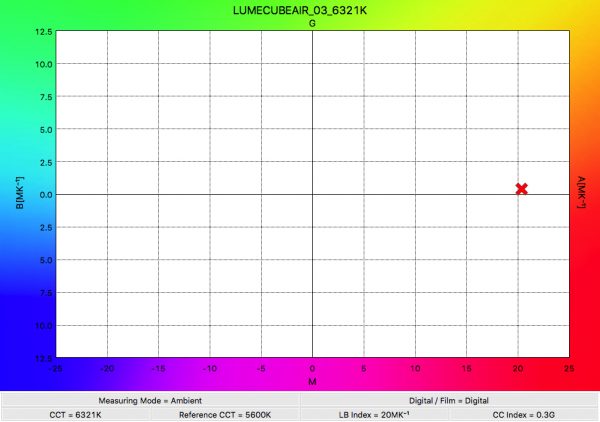 As far as color temperature accuracy is concerned, the Lume Cube AIR which is listed as a 5600K daylight fixture gave me a kelvin reading of 6321K and a ⊿uv (the value to show how much this light is away from being an ideal light source) of -0.0007. This Kelvin color temperature reading was quite a bit cooler than the listed 5600K. You need to keep this in mind when using the Lume Cube AIR with other types of LED lights. 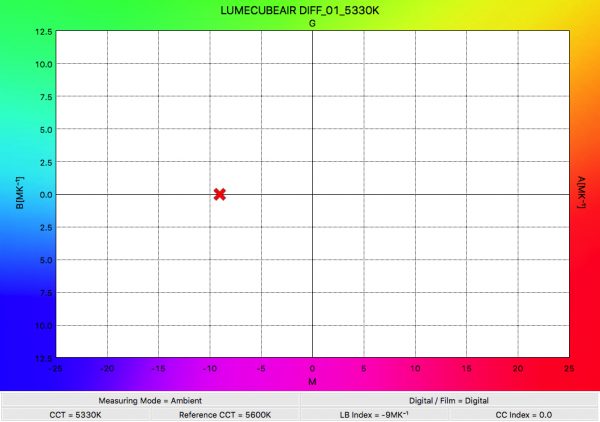 After testing the output and color temperature accuracy I then wanted to test the Lume Cube AIR for color accuracy. Despite the light only costing $69 USD, high-quality LEDs are still very affordable, so even low-cost fixtures such as the Lume Cube AIR should be more than capable of producing good results. Below you can see the results for the light.

In comparison the Aputure Amaran and the Profound PanFlex Mini, both have extended CRI (R1-R15) scores in the high 90’s.

For a purpose built light for photography and video, these scores were a little disappointing.

If you want to see what a good 3200K spectral response should look like, check out the Cineo Matchbox above. 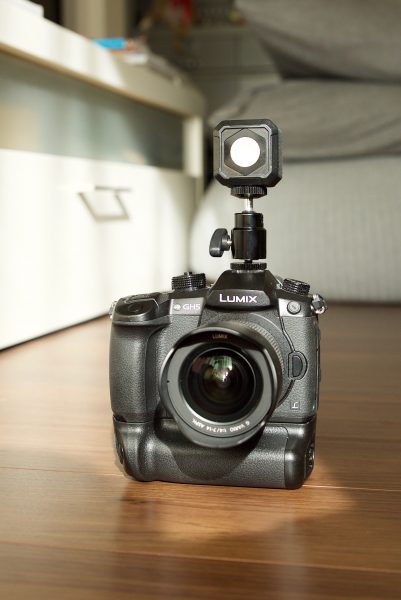 What I really like about the Lume Cube AIR is its versatility. You can’t really classify and put it into a particular box, even though it is shaped like one. There really isn’t any wrong or right way to use the Lume Cube AIR. Even though it is being targeted as a small, portable lighting solution for video/photo and drone use you can use the light for so many other purposes.

I found myself using the light a lot of the time for purposes it really wasn’t created for. I would just keep the Lume Cube AIR in a bag and then take it out to use it as a light at night when I was packing up camera equipment in the dark or as a flashlight when walking with equipment at night in areas that weren’t illuminated. 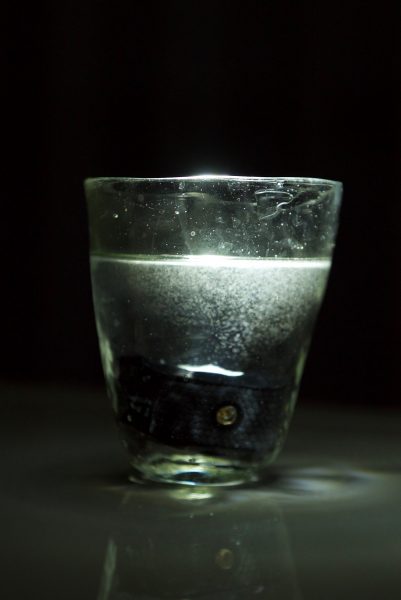 As for video use, I liked using the Lume Cube AIR as a background light for interviews and shoots as it was easy to hide and place in positions where other lights won’t go. Because the light is waterproof you can also do interesting things like putting the light in a glass of water and then placing that glass in a background. As long as your background is quite out of focus this works well. Don’t go putting a Lume Cube AIR into a glass of water that is clearly distinguishable in shot!

While you can use it as a direct key lighting source it isn’t a particularly flattering light unless you use the included diffusion filter. What you do need to keep in mind is that the diffusion filter does drastically reduce the lights output. 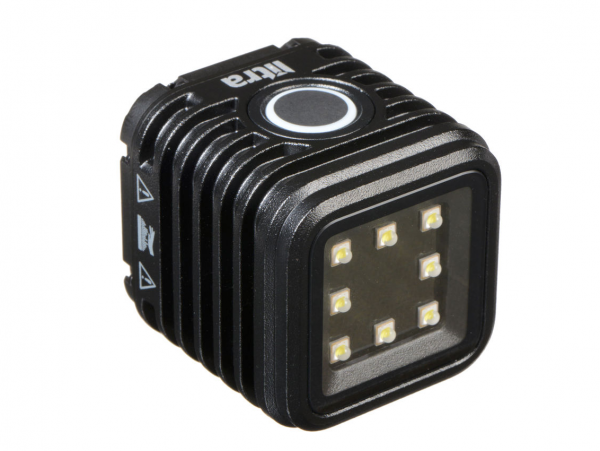 The most similar light to the Lume Cube AIR would be the LitraTorch Photo and Video Light, which is a small compact light fixture no larger than a GoPro Sessions camera. It features a daylight balanced (5700K) output in either strobe or continuous output. It is powered by a rechargeable lithium-ion battery and can be charged via micro-USB charging port. The output is flicker free at any of the three continuous output settings.

The light offers a run-time of four hours in low mode and 35 minutes in high mode. The light has an 80° beam angle and comes with two built-in 1/4″-20 standard mounting holes, an embedded magnet, a GoPro mount, belt clip, two magnetic mounts, a basic shoe mount, and slip-on diffusion. The fixture is water-resistant up to 30′. In addition, it can withstand drops up to 4′. The LitraTorch Photo and Video Light retails for $79.95 USD. 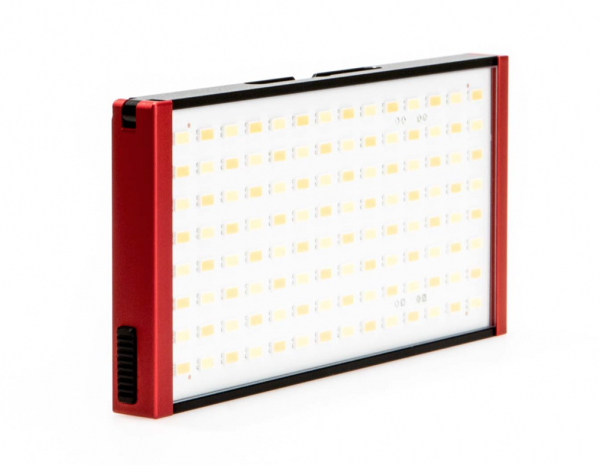 Although not fitting the exact same form factor, other competition could also include lights such as the Aputure Amaran, Profound PanFlex Mini, and the Aladdin A-Lite. 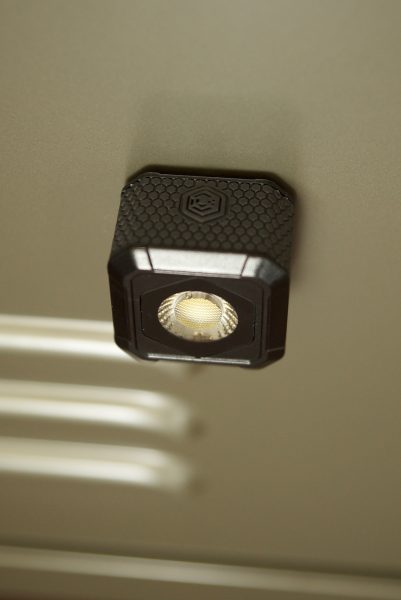 The Lume Cube AIR is a versatile little light that is easy to keep in a bag or even your pocket. It’s something you can always have with you and it can be used for a variety of different purposes. While it’s not a particularly great light when it comes to color rendering and Kelvin color accuracy, it more than makes up for it with output and usability. It’s certainly a jack of all trades and master of none light, but in some ways, I think that’s its appeal.