Media management app Kyno, has released a new v1.5 update with plenty of new features as well as a new premium version for studios & broadcast use.

If you aren’t familiar with Kyno, here’s a short overview video showing the multitude of tools and utilities in the app.

Lesspain Software also announced Kyno Premium which will be available from this Thursday. Kyno Premium compared to the standard version is targeted at broadcast environments with more complex workflows involving more team members in different locations.

One of the biggest features of Kyno Premium is the new delivery function. Kyno is able to put together packages of material and then hand them off with metadata to either local or remote destinations. For remote transfer, FTP/FTPS support is built in (extensible to Aspera and FileCatalyst transfer acceleration for enterprise customers, see below). A wide range of options lets users configure the workflow to match their specific delivery requirement ranging from delivering a shot list and proxies for the selected best shots or a full material delivery with metadata to either use in downstream Kyno instances or to import into Premiere Pro or Final Cut Pro X or a MAM system.

On the more technical side of things, Kyno Premium supports P2 camera structures, allows creation of MXF files as well as transcoding to Avid’s DNxHD/DNxHQ/DNxHR codecs. Audio track and channel handling can be freely configured in the transcoder with either automatic or fully individual channel mapping even for batch operations. The video denoise filter allows configuration from its default behaviour to be able to deal more flexibly with more challenges of noisy video material.

For the roll-out in large corporate environments additional options exist such as custom package deployment (CPD), i.e. the possibility to deploy/provision Kyno preconfigured with custom settings as well as customized organization- or department-wide transcoding or naming presets. Also, Aspera and FileCatalyst transfer acceleration packages are available for the new delivery workflow.

The standard version of Kyno is available for USD $159 and Kyno Premium is USD $349. On introduction, Kyno Premium will have a special pricing of USD $259, a 25% saving. If you already own Kyno, you will also be able to upgrade for USD $100 instead of $190. 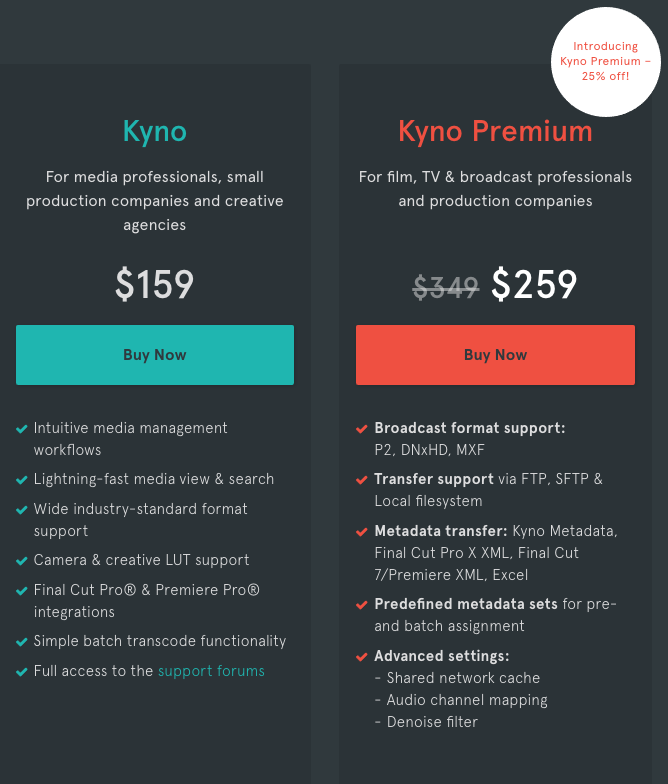 The price includes the complete software to keep and any updates that are released within one year of the purchase date. Update licenses can be renewed for USD $79 or $169 for Kyno Premium. After the year is up, you don’t have to renew the license to keep using the current version of the app that you have.

If you’re interested in trying it out, you can install Kyno for a free 30-day trial.