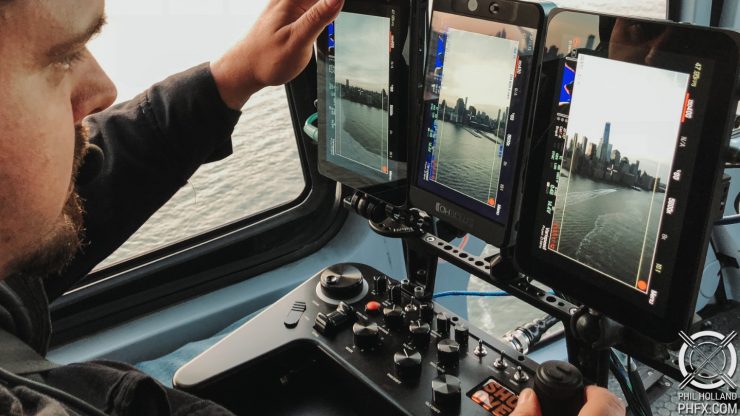 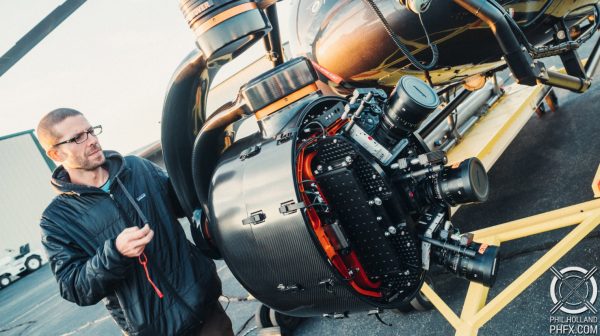 Hangar 95 and Gotham Film Works took delivery of the first SHOTOVER K1 Hammerhead 6-axis gyro stabilized gimbal which allows for cameras to be lined up and used in a panoramic array and this shoot was it’s maiden voyage over NYC. 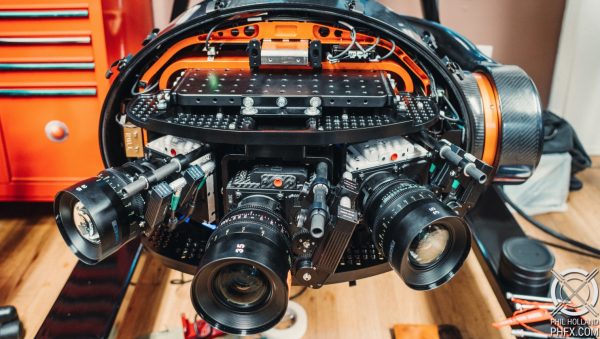 Prior to this shoot, Phil had been filming 8K VistaVision aerials for about 2 years. But now it was time to turn the large format concept up a notch or two. To do this they placed 3x RED Weapon 8K VV Monstro cameras into the K1 Hammerhead. On a creative level Phil knew this was going to be good. According to Phil the Monstro’s strengths comes in the form of great color, dynamic range, and very clean shadows. This would be crucial for low light and night shots. 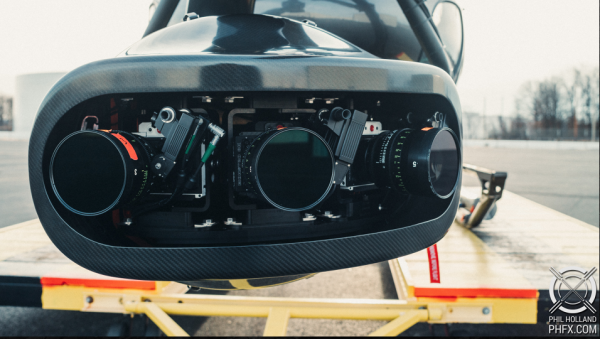 Lens selection was a quick decision for Phil, as he knew the project would involve shooting during the day and night. So the choice was to use fast primes that can cover the 8K VV Monstro sensor. The prime lenses Phil chose were the Tokina Cinema Vista Primes. Phil has used these lenses quite a lot on other projects and has been impressed by their clean performance when used wide open at their T1.5 maximum aperture. The Tokina’s image circle was generous enough that Phil could use screw on ND filters without any visible vignette or coverage issues. Also, since they don’t breath when you change focus it would make post stitching the three images together a lot easier. For this shoot, Phil settled on three 35mm primes, as his personal goal was to shoot wide vistas and get as close as safely possible to the subject matter to emphasize the resulting large format he’d be filming. 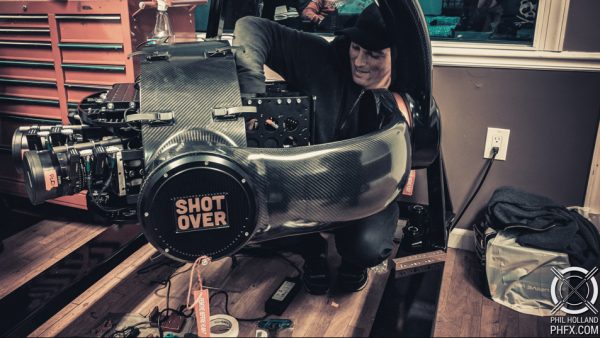 On a technical level, there’s a lot that needs to happen in terms of proper spacing, finding the zero parallax point, lens selection, determining your overlap, rigging, payload balancing, and a million other small things. Every RED Weapon 8K VV Monstro has a JETPACK SDI Module attached to sync genlock, provide power, control the camera, etc. This is actually one of the first times Phil had ever seen this bad boy used to maximum intent. Without using this module, the project would have been a lot more difficult to pull off. To create a quality stitch with pixel and frame accuracy it’s key to have genlock. During the rigging, especially since this was the first time setting up this rig, digging into the camera settings via WiFi and FoolControl was very useful, however, once cameras were slaved and synced properly it was a matter of controlling just the master brain. There was a bit of experimentation with our overlap which once locked led to the final balance and tuning of the K1 Hammerhead.

Up in the air 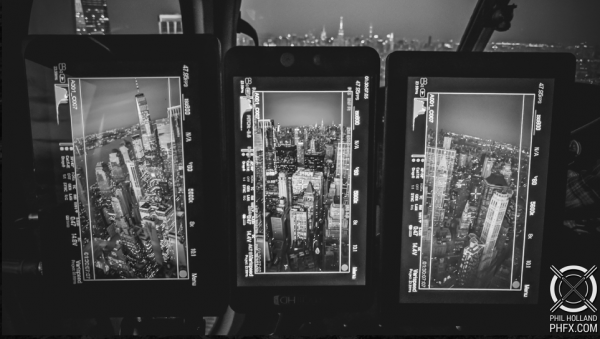 Once everything was rigged and tested out it was time to get up in the air and get to shooting. Mounted on the Shotover Controller were 3X SmallHD displays placed in a vertical orientation. Phil had a few moments on the ground to do some test stitches, but visually seeing the wide image for the first time was exciting and certainly a new way to look at New York. 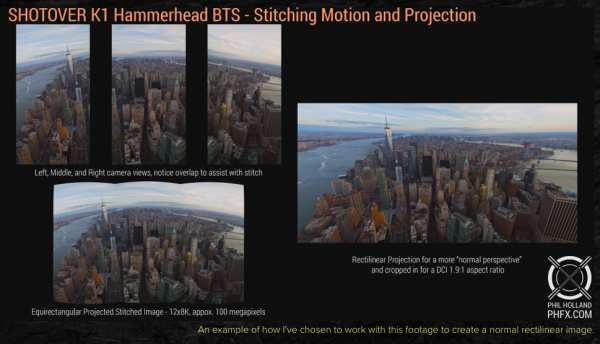 So what did this exact setup actually produce? Well with the 3X 8K VV sensors and the absolute thinnest overlap they ended up capturing 12x8K images, approximately 100 megapixels. The approximate image plane was about 60x40mm, which means this was pretty close to shooting 48 frames per second with a 645 200 still Cameras. Additionally, with the lens setup using the 3X 35mm Tokina Cinema Vista Primes they netted a horizontal field of view of around 103 degrees, which would be approximately be the equivalent of a 10mm prime on Super 35mm.

A stitch in time saves 9 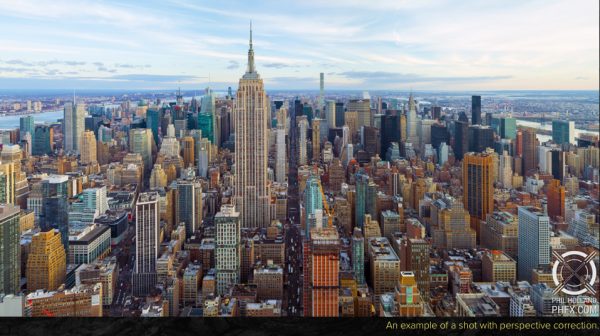 Stitching camera arrays is sort of a technical art form as you battle all sorts of things related to camera position and optics. But there’s a lot of power behind having this much captured resolution and detail. Selecting a take and extracting left, middle, and right camera angles, Phil experimented with a few different ways to stitch the motion, but he always targeted an equirectangular projection first and chose to change the projection to rectilinear (like a normal spherical lens) and then crop into a standard DCI 1.9:1 Aspect ratio. In this case the format would be considered DCI 12K. Phil’s main reasons for this is at the moment there is no 12K display, but having a solid 12K to 8K down sample is highly alluring with this particular array configuration. Interestingly you can extract an IMAX friendly image from this setup as well with an appealing FOV and resolution for proper IMAX screens. One other note, especially since 8K cameras have hit the scene that Phil has been experimenting a lot with is the perspective correction to provide an even more unique perspective on aerials especially in cities with buildings. By doing this he can generate very high quality results because he has so much resolution at his disposal.

Here are some of the results. Below are 4K frame grabs from one of the flights. Phil shot everything at overcranked 48fps and every shot was finished out to DCI 12K aspect ratio (it’s not a standard format… yet), but with the intention to scale down to 8K, 4K, etc. the whole combination of 3X RED Weapon Monstro 8K VV cameras in the K1 Hammerhead produced a stunning level of captured detail and the resulting large format provides a level of depth that’s rather mesmerizing, especially in motion. You can go to the PHFX page and actually save these and look at them full screen. 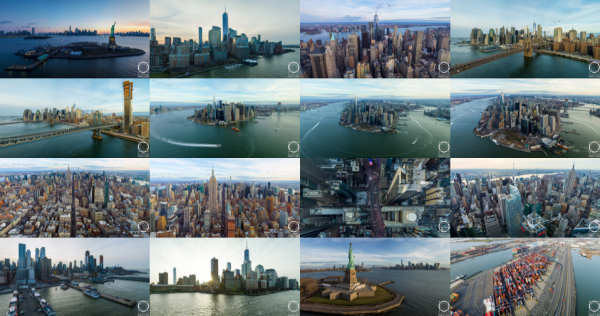 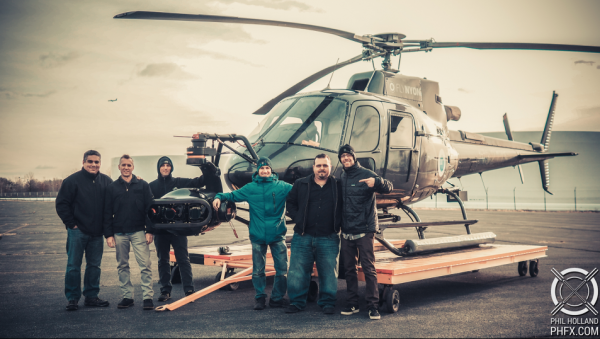 To complete this project it took a great deal of teamwork, collaboration, sharp minds, and expertise to get up and rolling in the NYC skies with this rig. Phil would like to thank Tim of Hangar 95 and Jose from Gotham Film Works for putting together something special on the east coast when it comes to aerial filming services and gear. Thanks also to Chris who was the pilot, shooting long runs isn’t easy and he nailed the flying lines. Brad, J.P., and Nick from Shotover for continuing to push the boundaries of what can be done with gimbals from the ground and air. Big thanks to RED Digital Cinema for the support on the other RED Weapon 8K VVMonstro cameras, getting a few of them at the same place and same time was certainly not an easy task near the holidays. Also massive thanks to Tokina, Ryan Avery, and Duclos Lenses for providing lens support. Last but not least, thanks to Mike Isler’s sharp mind throughout the rigging.

Phil and his team are certainly pushing the boundaries when it comes to high-resolution aerial image capture. It’s pretty amazing to see all of this cutting-edge technology being blended together to create stunning images.

Words and images reprinted with the expressed written consent of Phil Holland.