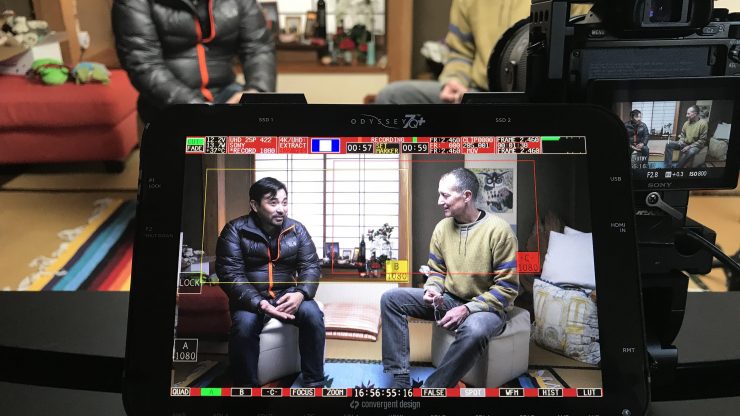 Redrock Micro OMC Director and Convergent Design’s Titan Extract allows you to get three moving shots from just one camera. We are always looking for ways to do more with less, and clients are always looking to cut costs. The number of times I get told “We don’t have the budget for a second or third camera operator, but we want three different angles for a two-person interview, can you do that?” is becoming tiresome. So if the client doesn’t want to pay for additional camera operators, and you don’t have multiple cameras of your own, what can you do? 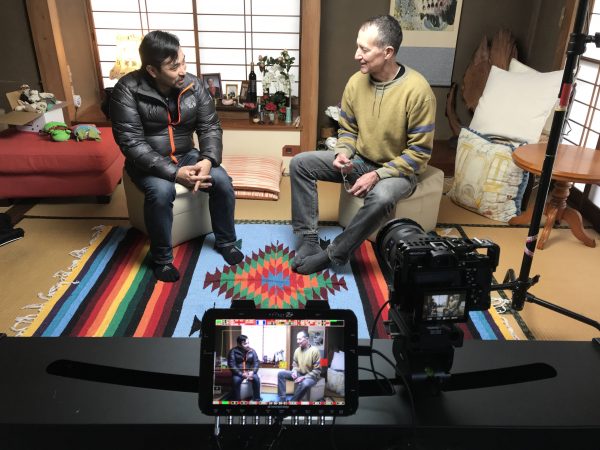 One of the solutions is to use the Redrock Micro OMC Director and Convergent Design’s 7Q+ or Apollo with Titan Extract to create the illusion that your interview is being shot by multiple cameras. Firstly, if you aren’t familiar with what either of these products do, here’s a quick overview.


The One Man Crew Director from Redrock Micro is a 36″ motorized parabolic slider that lets you add motion to your video without needing a dedicated operator. It can take camera loads of up to 22lb (9.97kg), and it also features remote control functionality, letting you set up and control the slider from your mobile device using Redrock’s OMC Remote iOS or Android app. It’s quick to set up and is light enough that it is easy enough to take with you on a lot of jobs. 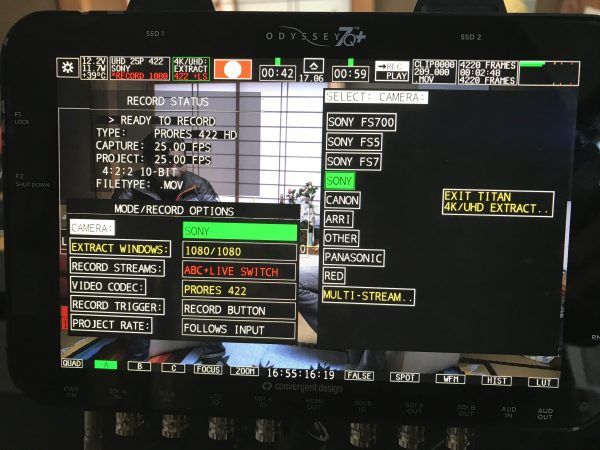 Convergent Design’s Apollo OLED Monitor, Recorder, Switcher is a four-camera HD video switcher that can record all four video inputs while simultaneously recording either the quad split display, or the program output. The monitor features a 7.7″, 1280 x 800, OLED, touchscreen display with a 3400:1 contrast ratio, true blacks, and professional monitoring features such as waveform, histogram, vectorscope, and 3D LUT support.

The 7Q+ and Apollo both now come with Titan Extract, which allows you to take one camera to a shoot, and obtain three separate recordings (plus a live switch between the three images). This feature can add a multi-cam look to single camera shoots, without the expense of three cameras and three recorders. One view is an HD downscale/super-sample of the full image area and two views are windows selected from the full image area. These views can be panned smoothly through the 4K field and the three views can be Live-Switched. All four HD views (The master/wide, the two windowed views, and the live-switched/program) can be recorded simultaneously in Apple ProRes with matching timecode and file names.

On paper combining both of these products looks to be a good solution for getting three shots from one camera, all being recorded in perfect time code sync and in the same codec. I’m going to be honest here, I don’t for one moment think that this is going to be a substitute for having multiple cameras and operators, but I wanted to set out to see if it was a viable option when additional cameras and operators can’t be used.

So how do we go about setting this up? 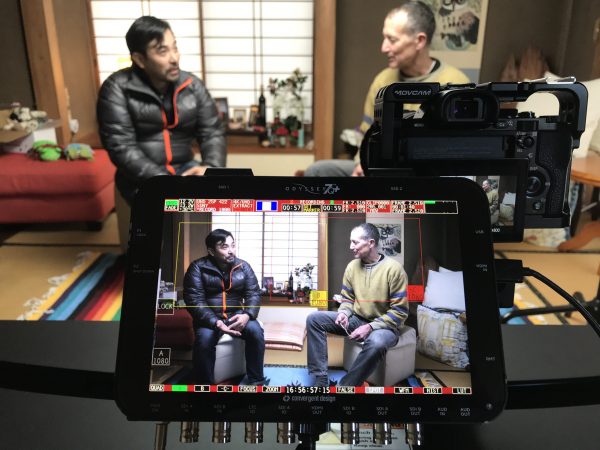 The first thing you have to do is find a good spot for your interview location that at least allows you to have enough space to set up the Redrock Micro OMC Director. What you also need to be mindful of is that if your camera is moving then the background behind your subject is also going to change. Ideally, for a two-person interview, the Redrock Micro OMC Director needs to be in a position where both of your subjects are clearly in the frame, so that they don’t go out of frame when the camera moves across the track.

Where you position the OMC Director does take a bit of trial and error if you are going to use it with Titan Extract, as you need to see what type of framing you can create for multiple shots from just one camera. As I mentioned earlier, this is never going to be a substitute for actually having three cameras, but it will get you out of a jam if you don’t.

One camera, one light, 10 minutes to set up


Above you can see a quick demonstration of what can be achieved using just one light, one camera, the Redrock Micro OMC Director and the Convergent Design using Titan extract. It was shot on the Sony a7S with a Zeiss 24-70mm F2.8 lens. The vision hasn’t been graded in any way as I wanted to see what was possible for a fast turn around in a news or event situation. Yes, I could have spent longer setting it up and putting up more lights, but the whole point of the test was to see what I could come up with, in a limited time frame working by myself. There is no point using products that are too slow to set up if you are working by yourself and have limited time to get the job done.

The results are ok, but I did find that the Redrock Micro OMC Director isn’t always that smooth, and that becomes very noticeable on your 1080 extract frames. 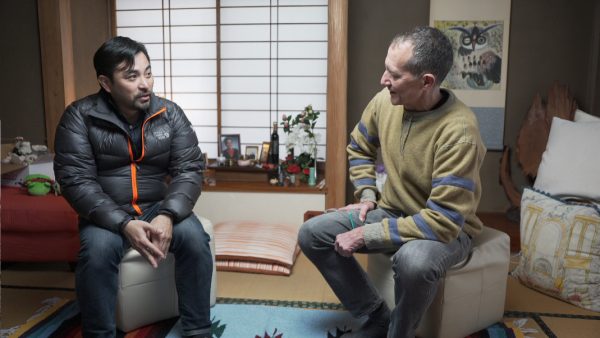 Even though your camera will be moving on the Redrock Micro OMC Director, you need to be very aware that the 1080 extracts from the 4K/UHD frame are on the same angle as your main wide shot. Therefore, your subjects are going to be more side on then you would ideally like. I found that it was best practice to have your main subject (not the interviewer) on more of an angle towards the camera, that way they are easier to see.

The other nice thing about using Titan extract is that all three streams get recorded onto the one SSD, all timecode synched and all in the same codec. You can also choose to record a live switch between the frames, while at the same time recording all three of the individual streams as well. This makes turning around a shoot like this extremely fast, as if the situation dictates, you don’t even need to edit it up. Titan extract is an extremely powerful tool that you should really be looking into if you shoot a lot of interviews as a one-man band and requires a fast turn around.

What does all of this weigh? Is it easy enough to carry around for a solo operator?

The Redrock Micro OMC Director is actually fairly light given its size, especially considering it can take camera payloads of up to up to 9.97kg (22lb). It weighs in at 6.58 kg (14.5 lb) including the tilt head. Depending on the camera you are using, you can get away with mounting it on a couple of reasonably lightweight light stands. This is fine, but it does mean you have to carry around two additional light stands with you. If you don’t want to do that you can always just place it on a table, or a couple of chairs, but that can be somewhat limiting.

The Convergent Design Odyssey 7Q+ or Apollo is easy to carry around and it doesn’t weigh much. Both of these products can be run off camera batteries in the field remotely, which certainly increases their usability for solo shooters. The OMC Director can also be controlled remotely via the iOS or Android App which also helps when you are working by yourself.

What’s this going to cost me? 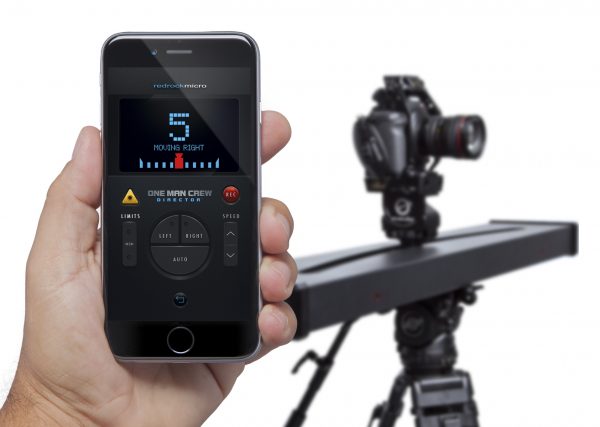 It isn’t cheap to get the equipment you require to pull this off. The Redrock Micro OMC Director retails for $2450 USD and the Convergent Design Odyssey 7Q+ retails for $1495 USD or the Apollo is $2995 USD. You also have to factor in the cost of media for the Odyssey 7Q+ or Apollo.

There are some alternatives to the Redrock Micro OMC Director although they have a lower maximum payload, some provide 3-axis of control so you could use them for other tasks.

The Redrock Micro does have an advantage being an all-in-one unit so there is no need to set up multiple parts of the slider or mount motors saving time on set. While it may not seem as flexible, only having 2-axis rather than three, it does do the task it is designed for and it does it well. Make sure to also get hands-on with the remote software for each manufacturer as it needs to be easy & fast to use especially when you’re on set.

This level of investment certainly needs to be thought about carefully. If you are doing a lot of corporate, high-end news or current affairs work where there isn’t the budget for extra cameras or camera operators the cost of the Redrock Micro OMC Director and Convergent Design Odyssey 7Q+/Apollo can be spread out over many years.

With that cost you may well be thinking, why not just buy two mirrorless or DSLR cameras instead? Well, that is certainly possible, but then you have to buy two other tripods, two more lenses, more batteries, more cards, variable ND filters etc. The cost will probably exceed that of the Redrock Micro OMC Director and Convergent Design.  It would also mean that you have a carry a lot more equipment with you, and you would have to factor in how much extra time it would take to set all of that up.

It’s also important to note that both of these products are very versatile and can be used for a lot of different applications, and not just for the one I have demonstrated.

This set up is certainly a compromise, but a compromise that you can certainly get away with if you are a solo shooter. As I said earlier, this can never replace a three-camera setup, but it does give you a nice way of creating the illusion that multiple cameras are being used. Ideally, at least for me, I would probably prefer to use this along with another camera that was shooting the main subject from a better angle. That way you would have four shot choices that you could use from a reasonably small set up.

The Redrock Micro OMC Director and Convergent Design Odyssey/Apollo running Titan extract make for a very capable solution for one man bands or small crews that want to be highly creative but don’t have access to multiple cameras or camera operators.