The Redrock Micro One Man Crew Director is the newest version of the company’s very popular all-in-one motorised parabolic slider. If you’ve not seen one in action, it’s a slider with a curved rail that allows your camera to move back and forth while keeping your subject at the same position in the frame. This can be used to great effect for creating nice subtle movement in interview situations and when shooting b-roll. The beauty of a motorised parabolic slider is that it will do all the work for you. This is very handy when you want to have a second camera angle that contains movement without you having to physically operate a second camera. For one-man-band operators, the One Man Crew Director allows you to achieve this with very little set up time required. Below are some examples of material I shot with the original One Man Crew.

I reviewed the first version of the One Man Crew last year, and one of my main complaints was that I thought that it was too noisy to use in a lot of interview scenarios. I wasn’t the only one to complain about the noise, so to Redrock Micro’s credit, they listened to customer feedback and decided to make some changes. According to the company, the new One man Crew Director has been redesigned, using a ultra-low noise drive system to keep it more stealthy at interview speeds, and quieter at higher speeds.

The other mechanical changes are the inclusion of new machined aluminum rails, that according to Redrock Micro produce “liquid smooth, gorgeous cinematic movement you’ll have to see to believe. These incredibly sturdy rails are engineered for strength to give a smooth ride to any camera up to 22lbs.” The new One Man Crew Director looks almost identical on the outside to the previous version apart from a newly designed power plug and the inclusion of a remote run start/stop cable plug for use with comparable cameras. The power input has been designed featuring a locking bayonet connector that won’t come out easily like the one on the previous version.

The One Man Crew Director comes with a d-tap power connector so you can run the device from a camera battery or other power source out in the field. It also comes with a pair of light stand or C-stand adaptor plates that screw in on the ends of the One Man Crew. You also get the camera head, travel bag, power cables and cable management clamps. 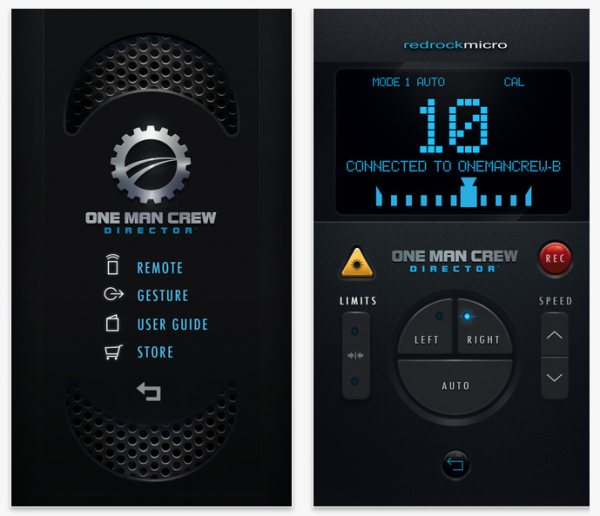 Perhaps the most exciting new feature is the OMC Remote App that allows you to configure and control the slider and start and stop the camera from up to 40’ (12m) away. The app is free and available for both iOS and Android devices. The One Man Crew Director connects to your smart device via its own self-generated WiFi network. The app makes a huge difference to set up time and usability and allows you to make changes without having to keep walking back to the actual unit. Unfortunately older versions of the One Man Crew will not work with the OMC Remote App.

The One Man Crew Director is certainly a big improvement over the previous version, particularly when it comes to controlling the noise. I still think it can be improved even further, but for interview situations it is a lot more usable than the previous version. If you’re running in Mode One, I think it is fair to say that you can run the One Man Crew Director at almost full speed in an interview scenario. If you move to Mode Two, then I would not recommend running it at over speed three or four if you want to keep the noise manageable. What I found concerning was that the noise level seems to change in the middle third of the track, although the noise is at least consistent whether the motor is moving the belt left or right. On the previous One Man Crew it used to generate more noise when it was moving right as opposed to left.

As far as smoothness goes, I did notice a slight improvement but I did not find it to be a drastic change. The new One Man Crew Director still offers a nice smooth parabolic move, even at longer focal lengths. Just be aware that the faster you run the device, the more vibration you will create.

The OMC Remote App is fantastic. It is intuitive and very straightforward to use. This makes operating the One Man Crew Director so much easier. The ability to control your device while standing next to another camera saves you a lot of time and gives you the added versatility of being able to change the speed or modify your parabolic moves once you have already started your interview. You can also start/stop trigger certain cameras to record if you have the correct cable. This is another very handy feature and overcomes the problem I had of having to keep walking back and forth to the unit if I wanted to start or stop the recording. The only thing you can’t do on the app is change between the different operation modes. This needs to be done on the actual unit itself.

The added inclusions, such as the D-tap power cable and light or C-stand adaptor plates are also a nice touch. My only problem with the D-tap cable is that it is way too small, and if you have the One Man Crew Director on light stands you’re forced to place the battery onto the slider itself. I would have much preferred a longer cable that allowed you to place a camera battery on the ground below the unit. The other small complaint is that they have included all these new accessories but given you the same travelling case, which means you can’t fit the light or C-stand adapter plates inside. This is just a small thing, but something that may also annoy potential users.

Thoughts and conclusions:
The Redrock Micro One Man Crew Director has certainly taken big steps in the right direction. The noise from the unit has been greatly reduced, but as I said earlier, there is still room for improvement. The One Man Crew has stiff competition from devices such as the Kessler Second Shooter and Edelkrone SliderPlus Pro. The Kessler Second Shooter 3-Axis Bundle w/ Stealth Slider which retails for $2299 US gives you the added versatility of having 3-Axis control and allows for a lot more versatility, but you do need to build it up. The Edelkrone SliderPlus Pro with target module and a soft bag comes in at just over $1700 US. The One Man Crew Director is the most expensive at $2450 US, which is quite an increase over the original version which sold for $1495 US and can still be purchased at B&H. If you own the original One Man Crew, Redrock Micro is offering a upgrade to transform it into a One Man Crew Director. This offer is currently available for $650 US (instead of the usual $999 US) until the end of summer. For one-man-band operators the One Man Crew Director offers a very good all-in-one solution that is quick to set up and very easy to use. With a payload of up to 22lb (10kg) it is suitable for most cameras. If you’re looking for an automated slider that can be configured in just a few minutes and gives you impressive results then the One Man Crew Director is definitely worth checking out.