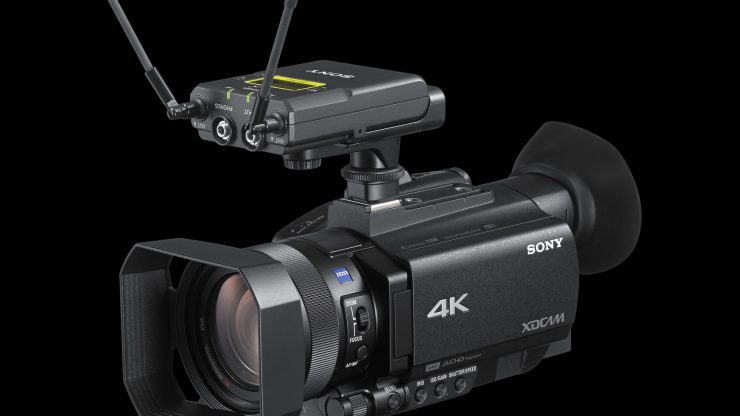 If you’ve ever wanted a broadcast camera that would fit in a jacket pocket, Sony has answered your dreams. And we’ve got the first footage out of it.

Automatic for the People

Sony will ship the PXW-Z90, an upgrade from their existing XDCAM PXW-X70, in December. It gives you 4K right out of the box, but the real improvements are in autofocus and connectivity, making this a fantastically useful small camcorder. Wait, useful autofocus? On a video camera? Yes – read on.

We got to shoot with the new Z90 for a few hours during a Sony press event in New York earlier this week.

The autofocus is quite good and will hold on subjects even when shooting through things in the foreground. You can touch the screen to pick your focus point and rack focus by touching different points on the screen. The hybrid phase-detection autofocus shows the focus point with little green boxes on the screen to show what its tracking. You can choose whether it autofocuses over most of the frame (WIDE) in a zone, in the center, or with a flexible spot focus. You can also choose how fast it focuses.

The autofocus is configurable, so you can choose to have it lock onto a single subject and follow it, or it can switch focus as new subjects come into the frame. You can choose whether it tracks faces or tracks objects. The examples of different AF switching sensitivity they showed were of a couple dancing in a crowd, where the focus locked on them and didn’t jump to foreground dancers (LOCKED ON 1 setting), and race cars coming straight into the camera, where the focus switched to the next car quickly (RESPONSIVE 5 setting.) You can also set the autofocus depth setting, where it will autofocus over a wide area or narrow.

This is a lengthy description of a complicated autofocus setup but the bottom line is autofocus works right out of the box. The default autofocus settings seemed pretty useful to me, a devoted manual-focus guy. Canon now has competition in the autofocus realm. I shot everything in the video above on autofocus.

The connectivity side of things is even more interesting.

First, they’ve brought back the LANC 2.5mm remote-control connection. They have an expensive remote control box that will control everything on the camera, but I think it’s a normal LANC socket that your old remote will fit.

The Z90 has 3G-SDI and HDMI outputs, either of which will provide timecode and remote trigger, though you can’t use both SDI and HDMI at once. The camera will work in a multi-camera switched setup either wired or wireless. With a Sony MCX-500 switcher and RM30-BP remote controller, and a few cameras, you have a live broadcast production setup (with tally lights on the Z90 screen!) for not much money. And your whole studio will fit in a single case. 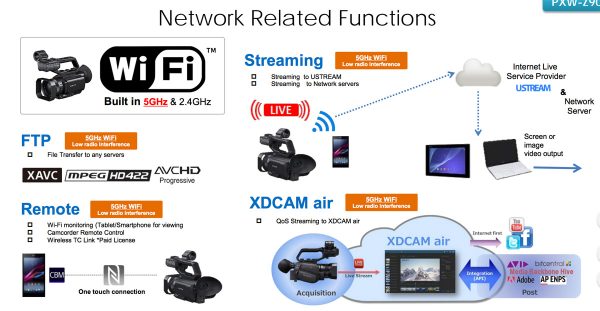 Second, the Z90 also has WiFi built-in (5Ghz and 2.4Ghz) that lets you stream wirelessly. The camera can stream to network servers, USTREAM and Sony’s XDCAM AIR.

You can also FTP straight out of the camera, which is actually useful, since it can simultaneously record full res footage and a 1280×720 proxy. You can also sync multiple cameras’ time codes over WiFi from a phone app. (The wireless timecode link license costs extra but they’re not saying how much right now.)

Speaking of paid licenses, you can also get MPEG (both 4:2:0 and 4:2:2), probably as an optional upgrade. If you’re still living in the 1080/60i broadcast world, this camera will work for you.

The 1” Exmor RS sensor gives you a 14.2M QFHD 4K (3840×2160) XAVC image that holds highlights and is acceptable to those used to 2/3” broadcast cameras. With the 1” sensor, you can have shallow depth-of-field at telephoto settings and it’s surprising how nice the image is. You can choose picture profiles, set up your camera’s color to your liking, and shoot in S-Log 2 or 3. It also does Sony’s Hybrid Log Gamma style of HDR. Whether you want live output ready to broadcast or shoot Log footage for color correction in post, this camera will do it. They didn’t yet have the codec specs as I write this but we should get them soon.

The Z90 has a 12x optical zoom that is sharp and the camera has Sony’s “Clear Image Zoom” magic seamless zoom that crops in on the sensor to give you extended zoom range without quality loss. The touchscreen is nice with improved resolution (1555K vs 921K on the PXW-X70) and they’ve upgraded the OLED EVF on the back of the camera with more resolution (2359K now, compared to 1440K on the PXW-X70.) The EVF is very useable, unlike a lot of the smaller camcorders out there.

(The camera is turned on by either opening the screen or pulling out the EVF from the body. The pre-production camera I shot with didn’t have enough resistance to pushing the EVF back in, and I repeatedly accidentally turned the camera off by pushing it against my glasses – I hope this isn’t the case in the shipping cameras!).

It uses the same NP-FV batteries as the PXW-X70 and a number of other Sony cameras, and battery life is quite good. Under the detachable handgrip with the xlr jacks is a multi interface shoe so you can use the Sony radio mics on this body without the grip if you want to go more stealth. 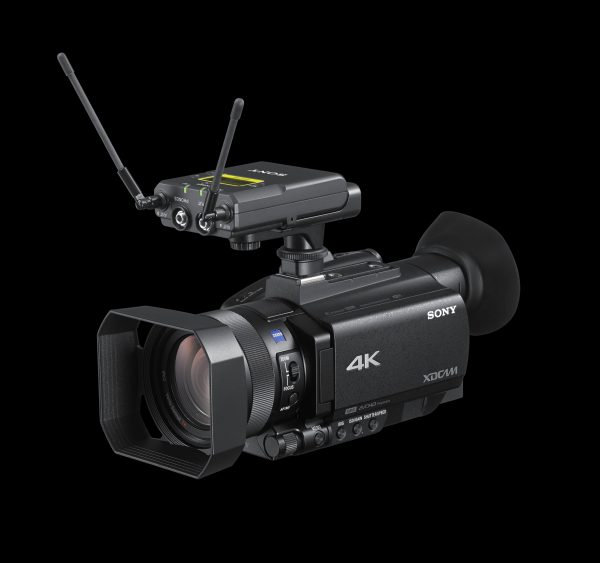 Low light ability is really good but not at the level of Sony Alpha cameras. At 33db gain it gets pretty noisy but not horribly ugly. The lens is f/2.8 at wide and stops down to f/4.5 at telephoto, so it’s best to set it at f/4 and leave it so there’s no iris ramp when you zoom. You can ride exposure with a wheel at the bottom left side of the camera, choosing whether it controls shutter, iris, or gain with push buttons. ND filters are on a switch at the back and fall easily to hand. The zoom rocker is first rate.

With the difficulties of traveling by air with gear these days, the small size of this camera is a life saver for journalists. I’ve been using the PXW-X70 for quite a while and the new PXW-Z90 shares the same body. My X70 has been rugged and reliable. Although it takes a while to develop the muscle memory to learn the controls, it has lots of configurable buttons and is pretty ok to use in full manual mode once you use it for a while. If you’re coming from a broadcast camera, it will drive you nuts but you can learn it quickly.

For wedding and event videographers, and for houses of worship, this camera is definitely something to consider at the lower end of the budget. The configurable autofocus and syncable time code could be very useful for covering sports, dance, and events. It will do Slow & Quick motion like most Sony cameras these days. It’s the only really small camcorder I know of that’s broadcast friendly – you can plug into a sat truck and do your live hit for the morning news with this thing. With the amazing autofocus, you can even stick it on a tripod and do a walk and talk as a one-man-band.

The only negative I noticed on the X90 in the short period I got to play with it was it took a rather long time to start recording when you hit the record button. I’m not sure if this was a result of it partially sleeping or if it was a result of me setting it to record proxy files or some other setting, because it wasn’t consistent. Sometimes it would initiate recording immediately and other times it would take maybe 2 seconds to start recording.