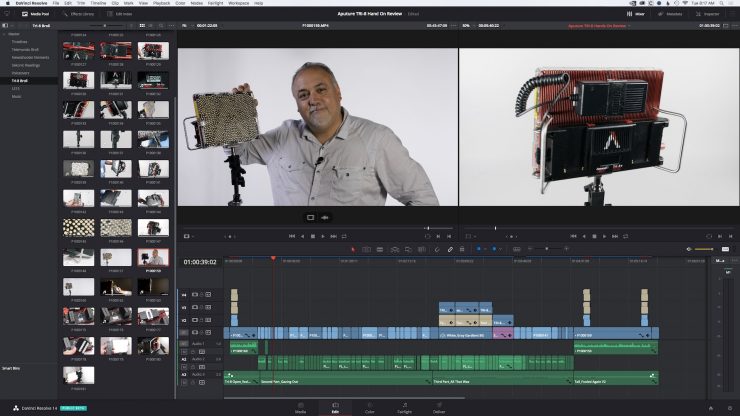 I’ve gone back and forth a lot lately with NLE systems. I’m primarily a Premiere Pro editor since that is the platform we edit on at the station I work for. I also played around with FCP X but just didn’t take to it. I can get the job done with FCP X but still prefer Premiere Pro. I’ve also used DaVinci Resolve more in the past few years. It’s such a powerful color grading tool but for me the editing part hasn’t been good enough. Is DaVinci Resolve 14 the one that will get me to switch?

At NAB 2017 Blackmagic Design introduced version 14 with a lot of new features including a big one: Fairlight integration for heavy audio editing. BMD acquired the powerful and popular Fairlight back in September 2016 and instead of making it a standalone offering they included it in DaVinci Resolve 14. Bold and smart move.

With the improved speed of editing in DaVinci Resolve 14 and the integrated audio features of Fairlight, Resolve Version 14 is closer to a fully functional standalone editing platform than ever before. I like this a lot since you don’t have to leave the software and round trip to edit video, sound and color grade. This saves time and makes things much more simple. 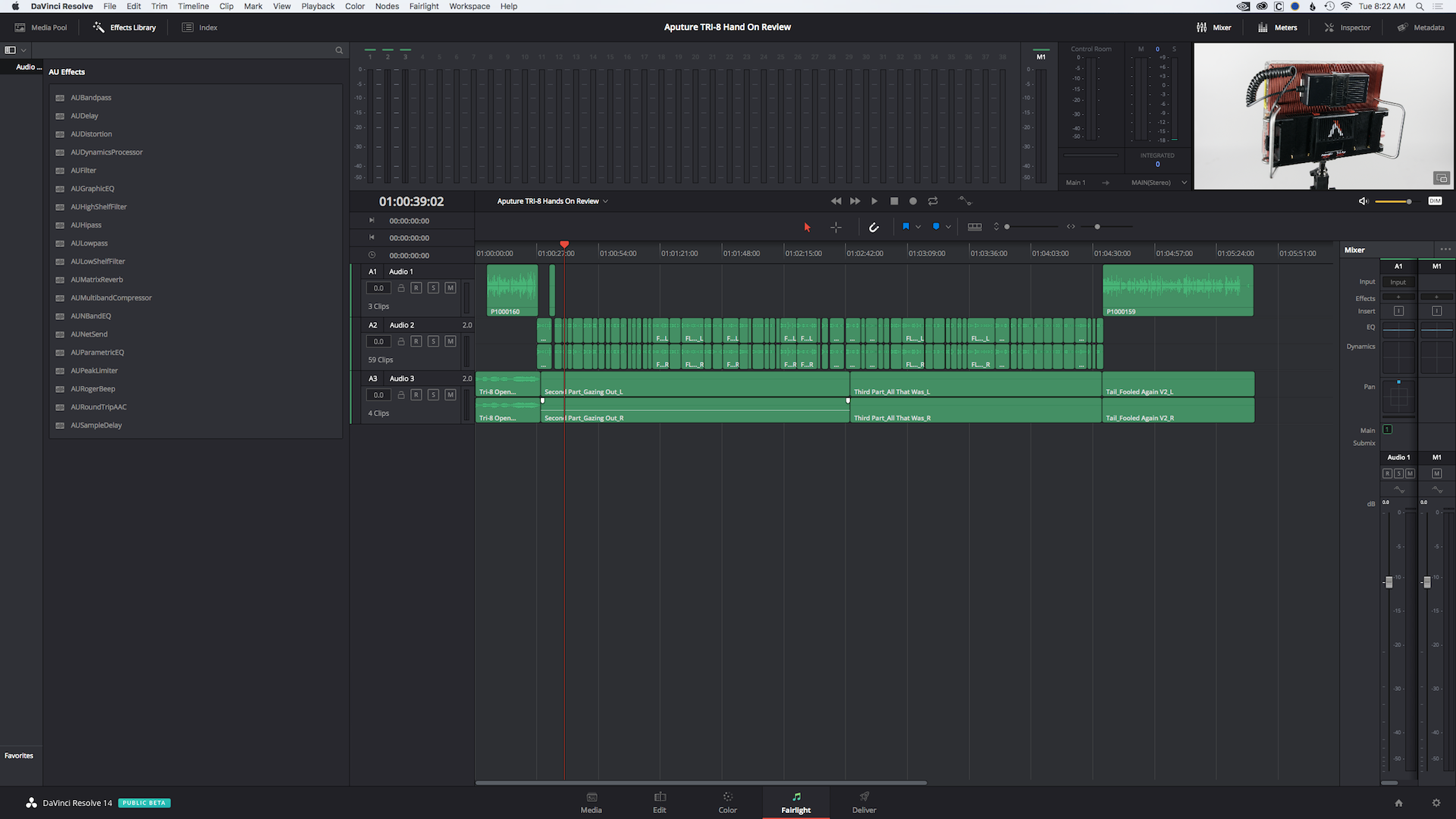 I haven’t dived into Fairlight much yet. It’s a very powerful piece of software. One very nice feature that DaVinci Resolve was never capable of doing was voiceovers directly to the timeline. Well this is now possible with Fairlight integration. I used Fairlight to record my voiceover for the Aputure TRI-8 review I did. Here is how it’s done.

It isn’t perfect but remember it’s still in beta. Some users are finding issues with USB microphones not showing up and connecting to Fairlight. I don’t have any solutions to this: I used a Focusrite Scarlett 2i2 with a RODE NT1-A and it didn’t require any workarounds. Plug and play. The only issue I had is you can’t set your levels yet but it works very well.

Editing A Review With DaVinci Resolve 14

After doing some testing and finding things to be pretty stable I decided to go ahead and do a full edit and see how it goes. I had a review of the TRI-8 that I had not started yet so why not!

The footage was a mix of 10-bit, 8-bit, HD and UHD, all from the GH5. Resolve handled all of it very well. I was pleasantly surprised on how peppy the editing experience was. Playback was the best I’ve ever experienced with these compressed formats.

When I used my J-K-L and spacebar shortcut keys the playback was very responsive. This is a big step forward. The former versions didn’t playback nearly as fluidly with codecs other than ProRes and DNx flavors. Things are looking good! 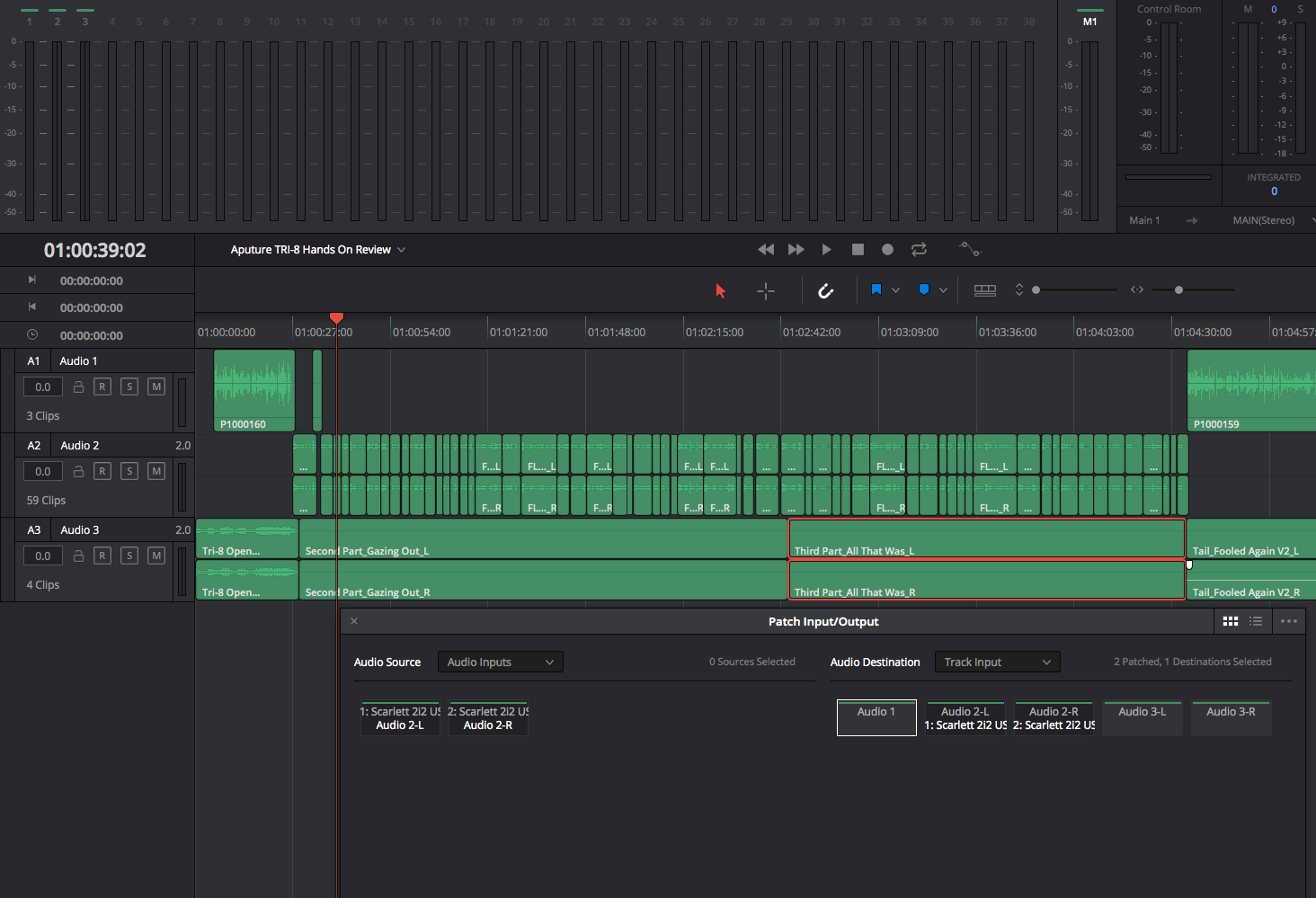 With my voiceover done and the base of my review edited I was impressed with how stable it was for me. I had a solid 10 hours editing with no crashes. The only issue I had was the next day I went back to finish up. I was about 90% done. I had it freeze but didn’t lose any work. What a relief! This project didn’t require heavy color grading and that’s why in part I decided to go ahead and use it for a full edit.

I was a tad slow editing. It easily took me twice as long to get the edit done since I was still learning the best way to edit and trim, plus the shortcuts are different too, so I had to keep figuring them out as I went. Shortcuts are essential for faster editing. Stuff like figuring out how to create a solid for a quick background required some digging. I found it but it took some time.

I did miss a few transition plug-ins I have on Premiere Pro like the ones from FilmImpact. Love these. The good news is Red Giant Magic Bullet suite works and a lot of their plugins are compatible, plus you don’t have to pay extra to use them on different host applications. 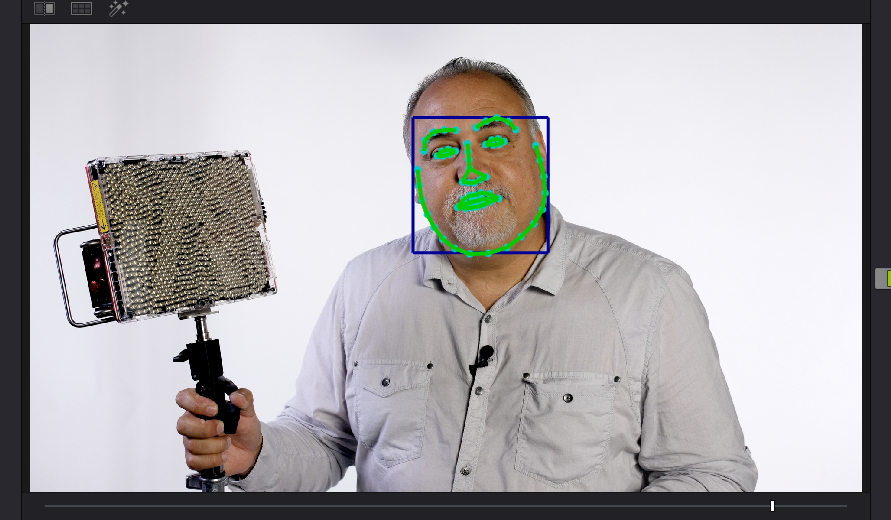 After I scored the review with SmartSound I was ready to do some quick color correcting. It went very well. Again no crashes. I wanted to test out a new advanced facial enhancement feature and lets just say it’s interesting. I found it really works well if the talent is looking directly into camera. Once one of the eyes go off-camera though the track and keyframes go a little wacky. It’s new and in beta so I didn’t expect it to work just yet but I sure can see the potential here. 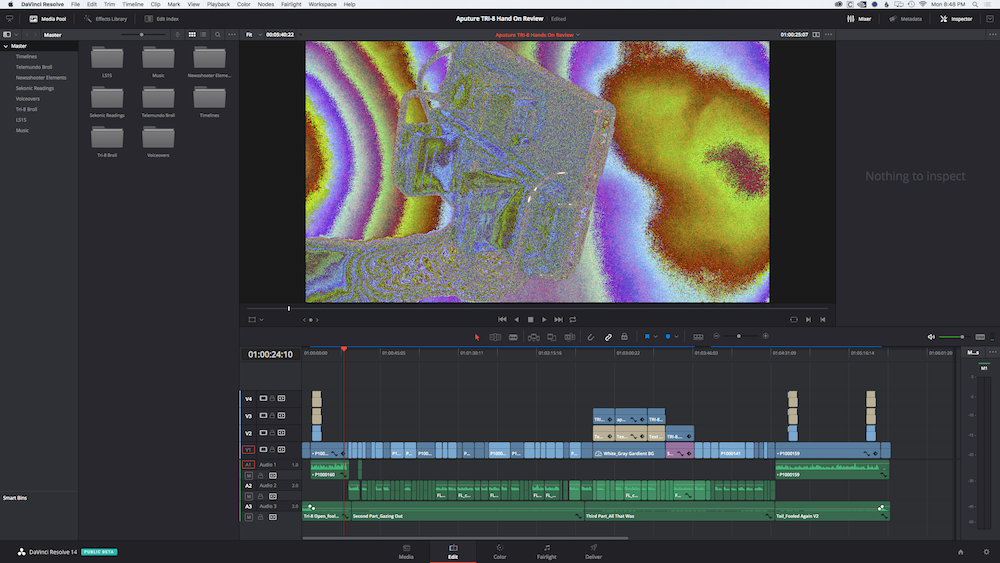 I did get this crazy issue. It was easily fixed by exiting the program and restarting it. All in all a very good experience.

Going Studio? What are my options?

Going the paid Studio route has a few more advantages than it did in the past. One big one is the price has been reduced from $999 US to $299 US. This is a very good deal if you compare it to subscription based software licenses.

The paid version offers a few more filters like lens correction for GoPro and a very good noise reduction filter plus a few more features too. Another option that’s got trickier to track down is the dongle version of the software. I’ve been on the lookout for a DaVinci Resolve Studio dongle for a while now. It offers the flexibility of using the software on multiple computers just by having my dongle with me. You can’t use the software on more than one computer at the same time though. Each “Studio” seat requires a license.

This is unfortunate since a lot of software, like Adobe’s Creative Cloud products, can be used on two systems. In theory they are letting you have one copy on a laptop and a workstation and run both at the same time. Unfortunately Blackmagic doesn’t sell the dongle version anymore. When they lowered the price to $299 US the dongle was eliminated.  You can find them used or free with a BMD cinema camera like the URSA Mini.

Here are a few features that you get with the Studio versions:

And finally DaVinci Resolve 14 is still in beta and not available on the App Store. Only final versions are available there. Overall, the differences between retail and the App Store versions relate to Apple’s Sandbox security. The user cannot automatically install the PostGres Database server or the Avid Control panel app. Also OFX vendors need to make Sandbox-approved OFX. There you go! Hopefully this little bit of info helps you find the best version for your needs. 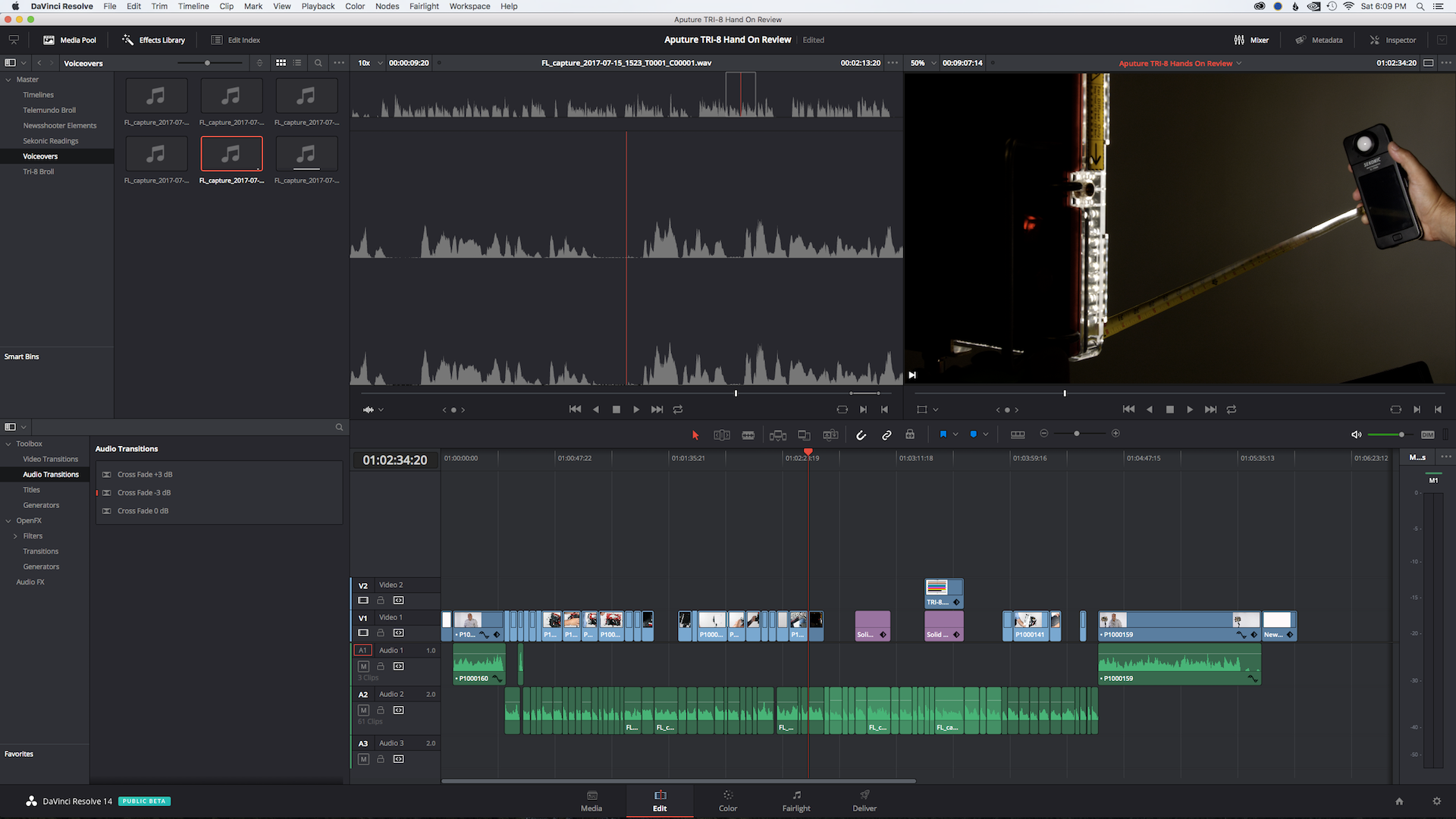 With DaVinci Resolve 14 now in Beta 6 with a big list of fixes and moving and improving fast I think I’m going to be using it a whole lot more from start to finish. The workflow is great and so far the stability is too. I have had my share of issues with Premiere Pro over the years and I hope Blackmagic is interested in keeping DaVinci Resolve a solid, stable platform first and adding functionality second. No one wants a bunch of cool features they cant use because it’s constantly crashing and losing work.

If you want to give DaVinci Resolve a go you can download the free version from Blackmagic Design.

So what do you think? have you tried the new version and are you willing to make DaVinci Resolve 14 your main NLE? Let’s talk in the comments section below.