FS RAW on the FS5 is a way to get DCI 4K footage into an editable codec without having to remortgage your house. But is it a viable option if you don’t have a team of people helping you?

RAW: now everybody wants it

RAW now seems to be expected for the sub-$10K segment of the market. The upcoming C200 will record a new flavour of RAW to internal CFast 2.0 cards, Panasonic are apparently planning a bolt-on RAW unit for the AU-EVA-1, and the FS5 needs an external recorder like an Odyssey 7Q+ or Atomos Shogun Inferno to record the camera’s FS RAW feed.

Since our original look at the FS5 the landscape has changed: the camera’s FS RAW firmware update is available for $499 US and it’s possible to output and record the FS RAW signal from the camera over a single SDI cable. The Shogun Inferno has come down in price and so has the FS5. Since recent price reductions in the US, you can get an FS5, RAW upgrade and Shogun Inferno for less than either an FS7, or the $8,000 we expect the C200 or AU-EVA-1 to sell for. But is the combination of an FS5 and a recorder a good one for solo shooters?

I’ve used the FS5 for HD shooting before, and much prefer it to the FS7. It’s lighter, more compact and I liked the Clear Image Zoom and variable ND filter a lot. Until now I’ve not had a chance to try out a version with the FS RAW firmware upgrade, so when Atomos offered a tricked-out FS5 to borrow I took them up on the offer.

Getting riggy with it

In truth I’m not sure I’d rig the camera quite like this: I don’t tend to shoot off the shoulder much and prefer to use a tripod when I can. That said, the Zacuto Recoil kit is very solid and balances the setup easily on the shoulder, while allowing you to clip into a VCT plate for tripod-based shots. It also adds a lot of weight to the camera, and although it’s not as bad as a fully-loaded FS7 I think you’d definitely feel it after a full day of shooting. YMMV of course, and if you’re committed to ENG-style shooting with a Super 35 sensor camera I salute you!

You’ve also got another screen to contend with. The Shogun Inferno shown here weighs around 1kg and is positioned away from the operator so you can still access the camera’s main controls. While it does balance well on the shoulder, it has the obvious drawback that you can’t monitor what the Shogun is recording if you’re using the camera EVF. For this reason as much as anything else I think I would strip the rig down a little and stick with some sticks rather than go ENG-style.

In practice though, if you can live with the ergonomics shooting FS RAW with the FS5 is disconcertingly easy. I chose to record to ProRes in the Shogun, meaning the resulting files are as edit-friendly as they can be for my slightly ageing laptop. You’re also able to record in Cinema DNG if that’s more your thing. 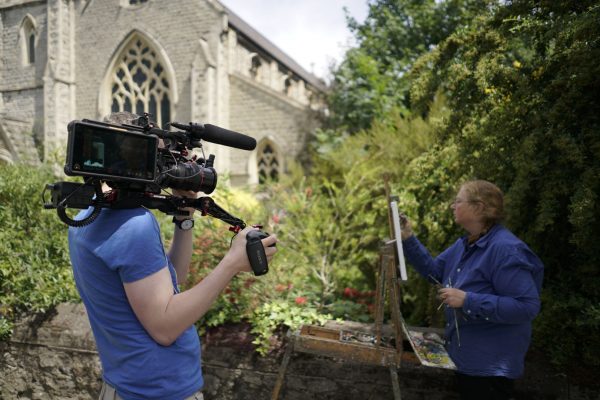 What I ended up with is a full DCI 4K image recorded in 10-bit ProRes. It’s also possible to record to 10-bit XAVC in HD internally as a backup or to use as a proxy. You also get four second bursts of 100fps (PAL) or 120fps (NTSC) 4K goodness that cache and record on an end trigger, and continuous 240fps recording in 2K.

That’s really not bad for a setup (FS5 with RAW update and Shogun) that’s going to cost you under the ‘under $8,000 US’ that Panasonic are touting for the AU-EVA-1. And to get similar results from an FS7 you’ll need the XDCA unit that retails on its own for around $2,000 US, as well as the camera.

FS RAW on the FS5: Setting up the camera

Back to the FS5. When you roll on the camera, you roll on the Shogun. The buffer times for writing the 4K 100fps shots to the Shogun’s SSD are clearly indicated in the camera’s viewfinder, although there’s I needed some practice to get used to triggering the end of a shot rather than the beginning.

Shooting FS RAW on the FS5 you’re restricted to the built-in Picture Profiles, so I shot in Slog3 and SGamut with white balance locked to 5500K. This is the only aspect of the setup which could get tricky if you’re shooting in mixed or variable lighting conditions – because Sony very reasonably assume that you’re going to dial in white balance adjustments later when shooting RAW you don’t have the flexibility to dial in your own Kelvin temp.

To be fair this is a result of wanting to record to ProRes, and in practice (a) I suspect shooting developing situations isn’t this setup’s ideal use case and (b) you’re likely to have a lot of wiggle room anyway for tweaking colours in the resulting 10-bit ProRes file.

Drawbacks to shooting FS RAW solo on the shoulder

If you’re using the FS5 and Shogun setup on the shoulder it really helps to have someone around who can check critical focus and exposure for you – although the camera’s viewfinder (used here with Zacuto’s loupe attachment) is pretty good, it’s still very flat when shooting in SLog3 and it can be difficult to judge what’s sharp even when punched in. The Shogun (or other recording device of your choice) also offers bigger, better video assists like scopes and histogram to help get your exposure in the right ballpark.

Crucially they’ll also allow you to monitor with a LUT on – not something you can do with Sony’s viewfinder. SLog3 basically demands you expose so far to the right it feels wrong if you’re viewing it as is (at least to this habitual Canon shooter’s eyes). Which is also to say there’s a lot of latitude in the resulting file as technically what I shot was probably a stop or two under Sony’s recommended exposure zone – I backed off a bit as I was convinced I was overexposed, looking through the viewfinder. I’ll know better for next time…

My footage seemed a little noisier than what you would get from in-camera recordings – this is all but inevitable as by taking the FS RAW feed you’re bypassing all the camera’s own processing. It’s most obvious in the video below on the hair of the woman who wipes across the frame in the final shot.

If you’re going to the trouble of shooting in this way I’d recommend investigating a denoising plugin for your NLE. I’ve treated the footage in the version at the top of the page using the trial version of Magic Bullet Denoiser III (check out Matt’s review here) which seems to do a good job even just using the default settings. One word of warning: it’s pretty processor intensive and took around an hour to export from FCP X using a late 2013 Macbook Pro. The plugin also seemed to unsettle my installation of FCP X and I experienced several very uncharacteristic crashes while I had it installed. Not a setup for quick turnarounds! Or perhaps: use a newer computer.

Ultimately what you’ve got here is a mature, field-tested camera with a mature recorder/monitor that allows you to record in 10-bit DCI 4K for less than $10,000 US. You could also easily swap in an Odyssey 7Q+ recorder – though it’s more expensive and you would need to pay for a firmware upgrade to enable RAW. That capability is built in to the Shogun Inferno. For existing FS5 owners looking for a bit more oomph from their pictures it’s well worth considering though, especially as the Sony alternative – a step up to the FS7 – gets expensive quickly once you factor in the cost of the XDCA add-on and media.

Plus in the base FS5 you’ve still got an HD camera that shoots in a widely accepted codec to broadcast specs that’s small enough to mount easily to a gimbal or crane.

So the C200 and AU-EVA-1 have a lot to live up to, both specs-wise and in terms of real world performance, when we get our hands on them later this year.

Whatever happens though the (sub-)sub-$10K US market is definitely an interesting place at the moment, and arguably we’re all winners as a result: better cameras with more features at lower and lower price points. What’s not to like about that? I’m sure you can tell me in the comments below…