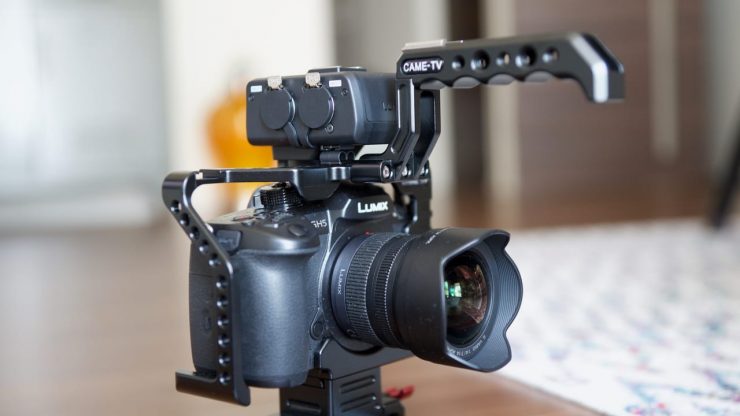 I’m always impressed when companies react quickly to feedback. A few weeks ago I reviewed the CAME-TV GH5 cage, and I found some problems when it came to the design if you wanted to use the optional DMW-XLR1 XLR microphone adapter. This is because the top handle had to slide onto another raised mount that was positioned too close to the hotshoe interface on the GH5. The only way to use the DMW-XLR1 audio adapter with the cage was to remove both the top handle and the plate that it slides onto.

CAME-TV read my review and within a week they had redesigned their cage so that it now works with the DMW-XLR1. The physical design of the cage is almost identical to the original version, with the only change being a new top handle. The top handle can no longer be taken off without tools (which is a bit of a shame), but it can be reversed so you can have it facing forwards or backwards. It does feature more mounting points that the old handle, but unlike the original version (which could slide along a plate) it can only be fixed in one position.

The other problem I encountered with the original cage was that if you wanted to use both a on-camera microphone and a radio mic receiver the way the cage was designed meant you didn’t have any room to access to XLR inputs on the DMW-XLR1. The improvements to the new cage mean that this is no longer a problem and you can easily mount an onboard microphone and radio mic while having complete access to the XLR inputs.

It’s good to see that CAME-TV have taken feedback and made changes, but I still think there is room for improvement. The fact that you can’t remove the top handle or reverse it without using tools is something some users may not like. If you are a GH5 owner and you plan on using the DMW-XLR adapter then this cage certainly allows you to do this and have complete access to all its controls and the XLR inputs.

The new cage design is already available to purchase for $298US.