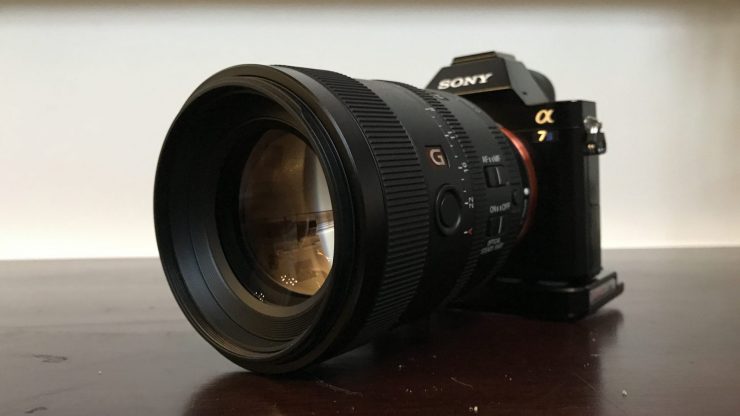 Sony announced two new lenses last week and we’ve been able to get our hands on them to try them out. The first is a relatively run of the mill 85mm f/1.8 prime. It’s a fast medium telephoto for E-mount cameras that ticks all the right boxes.

The image quality seems good (though we were shooting under controlled, set up conditions), it’s light and compact, has a metal body and will be decent value when it’s released in mid-March – it’s due to sell for around €650 / £600.

Nice as the 85mm is, this wasn’t the main attraction. The star of the show at the Sony event was the FE 100mm STF G OSS, a specialist prime lens that promises both high resolution and creamy out of focus bokeh. It achieves these apparently contradictory aims by the use of an apodisation element – Sony’s Ben Pilling explains more about this in the video below.

The net effect is similar to having a tiny internal ND filter that increases in density towards the periphery of the element. This effectively softens the edges of out of focus areas, while leaving the in focus parts of the picture sharp.

The lens has an 11-bladed aperture which makes the bokeh very round. And with the addition of the apodisation element the circles take on a three-dimensional, spherical appearance.

Sony showed us some example images where this was very obvious – I tried out a comparison between the Sony lens and a Canon 70-200 L IS II set to 100mm, and while it’s maybe not as pronounced as in Sony’s marketing materials you can see a difference between the two lenses in the out of focus areas. Judge for yourself in the video below.

One area I was pleasantly surprised in was the OSS – Sony’s implementation of image stabilisation. You can clearly see a big difference in how steady the picture is between the two shots at the end of the video. A quirk of the a7S I shot on was that the stabilisation wasn’t immediately apparent through the EVF, although having seen the results I would happily use it to shoot the FE 100mm STF G OSS handheld.

Close focus distance in the lens’s macro mode is a useful 0.57m – this is lockable via a ring on the lens body and offers a 0.25x magnification. It probably won’t replace your macro of choice but does make this lens a more flexible addition to your kit bag.

One thing to be aware of though is that although the lens itself is f/2.8, the use of the apodisation element means the effective T-stop is a rather slower T5.6. The back of the camera reports the effective T-stop as an f/number (see picture below). This does mean you’ll have to bear in mind the need for more light than you’d need with a T-stop of 2.8 – especially when shooting video where a slower shutter speed is rarely desirable.

The lens itself feels solid in the hand and is a substantial addition to an a7 series camera. The buttons are weather sealed and the body is metal so it feels like it could take a beating. The lens is also focus-by-wire. This is a tricky one – I don’t think I would have noticed had Dan not primed me before going to the event. But while handling the lens you can just about tell the linkage isn’t mechanical: it’s slightly easier than it should be to overshoot when adjusting focus. I don’t think it’s a deal-breaker – if you’re in the market for a lens this specialised I suspect you could live with it – but maybe something to try before you buy.

This is a specialist lens in Sony’s premium G Master line and it has a price to match. It’s expected to be available in mid-March for €1,850 / £1,700. That’s not cheap, but if you like the look of the images it produces it could be a great option for interview shots with distinctive, pleasing out of focus areas and sharp subjects.