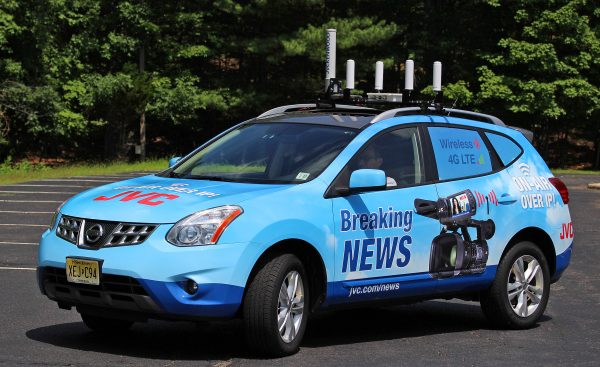 This system, which bridges 5ghz wifi antennas to a bonded cellular 4G uplink, is an alternative to live broadcast backpacks or boxes such as those from LiveU, Dejero, TVU Networks, Streambox, and Teradek. The difference is that it’s multi-camera capable.

The $5,000 US bridge is basically a robust and powerful mobile hotspot for JVC’s IP-enabled 800-series cameras. The selling point here is a 2,000-foot range for the camera-to-bridge connection and the ability to use multiple cameras with the same bridge. No backpack needed. 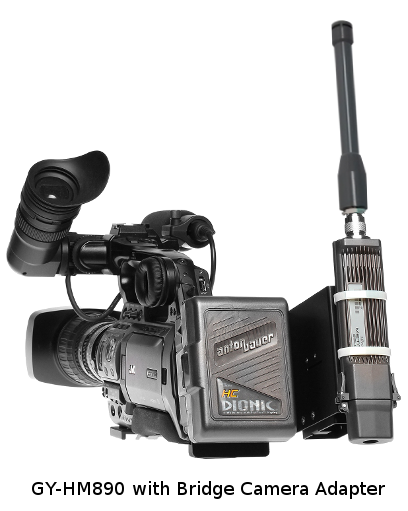 JVC’s broadcast cameras have encoders built into the cameras that enable IP streaming. If you need an HDSDI output at the studio receiving end, you’ll need a decoder to get the signal back to a video signal, but you can stream directly to the internet if you don’t need to broadcast your footage.

JVC says their roof-top cellular connection, with 4 diversity high-gain antennas, is superior to portable bonded connections. In addition to streaming from JVC cameras, it’s also a VPN-capable hotspot. Although they’re showing it on top of a car, it can be mounted anywhere and can be powered by a brick battery for 8 hours.

WAYNE, NJ (Nov. 1, 2016) – JVC Professional Video, a division of JVCKENWOOD USA Corporation, will debut the ProHD Wireless Bridge, a video-over-IP solution for multi-camera live broadcasts that exceeds the performance of typical bonded solutions. Compatible with JVC’s ProHD and 4KCAM streaming camera models, the system is ideal for broadcasts that require high reliability and camera mobility. JVC will debut the new system at the NAB Show New York (Booth #1515), which runs Nov. 9-10 at the Javits Convention Center.

Each camera in the system is equipped with a WB-MCA100 camera transceiver module, which plugs directly into the camera’s USB connector and operates up to 2,000 feet from the vehicle-mounted base station. Handheld JVC streaming cameras can also be used with the ProHD Wireless Bridge when paired with a smaller radio module, which has a 400-foot range.

The vehicle’s WB-CELL200 cellular uplink with high-gain antenna array aggregates signals from two mobile carriers. As a result, the vehicle becomes a remote broadcasting hub that receives signals from one or more field cameras and creates a virtual private network (VPN), which securely transmits camera signals and provides a high-speed mobile hotspot for field staff. A mobile access point (WB-MAP100) with a separate high-gain omni-directional antenna receives signals from cameras and delivers them to the cellular uplink. All electronics and antennas are pre-mounted to the roof assembly, and are IP67 rated for operation in harsh mobile environments.

At the facility, the BPL-380 router aggregates up to 20 cellular uplinks, so a broadcaster can equip all its fleet vehicles with ProHD Wireless Bridge systems and direct them to a single IP address. When combined with the BR-800 Broadcaster and BR-DE800 ProHD decoder, the ProHD Wireless Bridge becomes part of an affordable and reliable mobile back haul system.

“Our ProHD Wireless Bridge system is far more efficient than existing bonded solutions,” explained Edgar Shane, general manager of engineering, JVC Professional Video. “The antenna array on the vehicle’s mobile uplink is deployed in a diversity pattern, so it provides significantly better download and upload bandwidth and can operate with a much lower signal than the built-in antennas of USB modems. Plus, your shooters don’t need to carry around anything extra, because our transceiver module plugs right into the camera.”

In addition to the hardware components, JVC’s solution includes a subscription service with monthly data plans. The ProHD Wireless Bridge system is immediately available with an MSRP starting at $5,000.