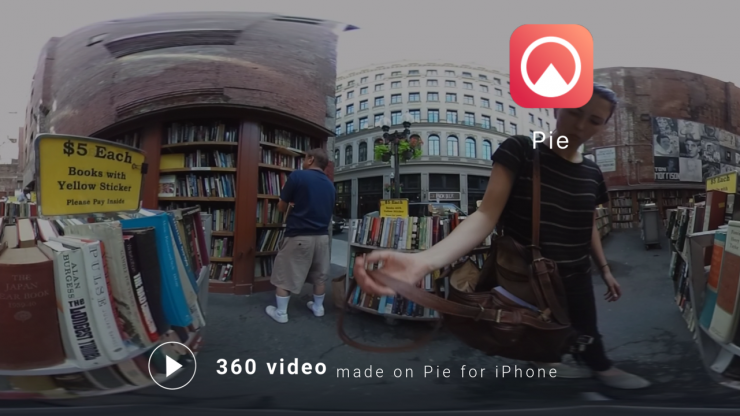 Just as SnapChat offers an intro to augmented reality for many users with its face-altering filters, there’s a new app in town that hopes to be the SnapChat of 360 video.

Users can post videos they’ve shot on their Insta360 Nanos (a Pie partner), Ricoh Thetas, Nikon Keymissions and more, but a 360 camera isn’t absolutely essential. Using just an iPhone, users can also move their phone around to capture a slice, which is essentially a video that allows viewers to move forward or backward in time as they swipe around the scene. If that doesn’t quite make sense, it’s sort of like Instagram’s Boomerang app.

Here’s a look at how it works:

After posting a video to pie, users can also share it to Facebook, Instagram, Twitter, Messenger and Whatsapp. Although posting to existing channels will help Pie establish a user base, according to Pie co-founder Ceci Mourkogiannis, a community has already begun to emerge.

In a blog post, Mourkogiannis wrote that she believes Pie will become a place for 360 creators and fans to test new filming strategies, get to know one another and share best practices.

After using the app myself for all of 20 minutes, here are three things I’ve learned:

1) There are a handful of journalists from various news organizations testing it out.

Although Pie offers an interesting opportunity to publish user-generated 360, filmmakers, YouTubers and journalists are already testing out the app.

Thus far, most are sharing short scenes, while an official account from the Associated Press is sharing short clips as well as previously published 360 videos, like “Seeking Home: Life inside the Calais Migrant Camp.”

As (and if) more users adopt the app, it’ll be an interesting testing ground for 360 video content and—as Mourkogiannis put it—a place for “bottom-up innovation” for 360 storytelling.

With 360 content being so much larger than photos and fixed frame videos, it takes a second or two for thumbnails to load as you scroll to older posts.

With the lower image quality of 360 content compared to other cameras, the thumbnails are also a bit fuzzy and are distorted to convert a 360 sphere into a square thumbnail. Shots where the camera was held by hand look particularly weird in the thumbnail!

It’s also worth noting that thumbnails don’t show your filters, and any text you’ve added on top of your video clip will appear as your thumbnail caption until the viewer clicks on your video.

Sharing things you’ve posted on Pie to other platforms is also a bit lacking. Of course, social engagement on existing platforms will help Pie establish an audience, and it will also help to expose more people to 360 content. However, the branding all over my shareable images will mean that I will never, ever share anything I post on Pie to aesthetically-oriented platforms like Instagram (though it looks a bit better on Twitter and Facebook). 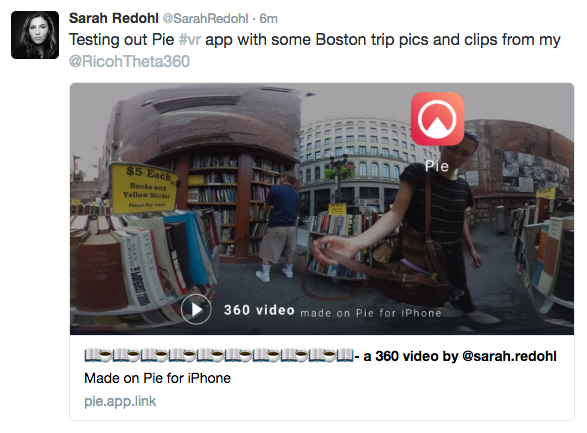 I will say, though, that despite these issues, the app is actually pretty usable for being only 3 days old.

Although I enjoyed my twenty minutes inside Pie, my iPhone did not. Looking around this app will definitely drain your battery quickly!

Overall, I think Pie is an interesting concept in that it offers an outlet for user-generated 360 content with a low quality threshold, as well as one more place to post and promote pro content.

However, how people want to interact with 360 content is still emerging. Will 360 video be a destination experience where people pop on a headset and become fully immersed? Will it be consumed on flat screens in bite-size portions as people pass it on their newsfeeds? Or, will it be a social experience in its own right?

Either way, it’ll be interesting to see what comes of Pie and how it fits into the ever-evolving 360 ecosystem.