Single handed operation brushless gimbals have increased in popularity in recent times and the market is crowded with options. One of those is the soon to ship Zhiyun-Tech Crane M which they were kind enough to send over for review. The Crane M is a smaller version of the company’s popular Crane gimbal that I previously reviewed on the site. 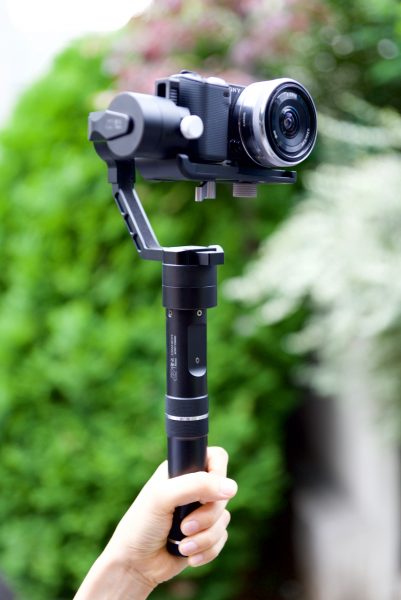 Zhiyun-Tech has made the Crane M specifically for smaller cameras such as the Sony a6300/a6500, Canon EOS-M, Nikon 1-series and action cameras like the GoPro and Sony Sony FDR-X3000R. It also fits smartphones like the iPhone 7+. The minimum camera/lens weight that you can use on the Crane M is 125g (4.4oz) and the maximum is 650g (22.9oz). 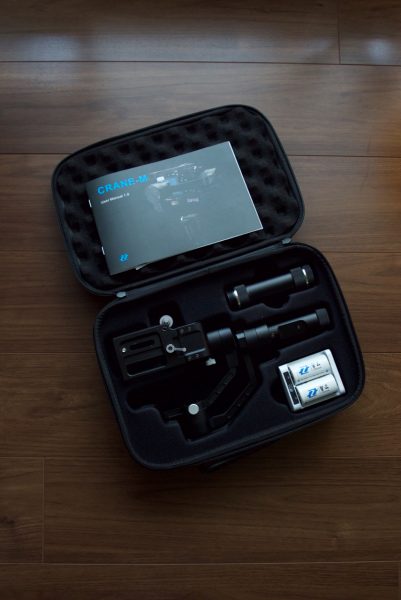 The Crane M stabiliser comes in a nice soft case with two Li-ion batteries, a charger, USB cable, quick start guide and user manual. I really like it when company’s take the time to include a proper printed manual and not refer you to an online PDF. Unlike many others, the instructions are very clear and concise, and even if you are a first time gimbal user you should be up and running fairly quickly. 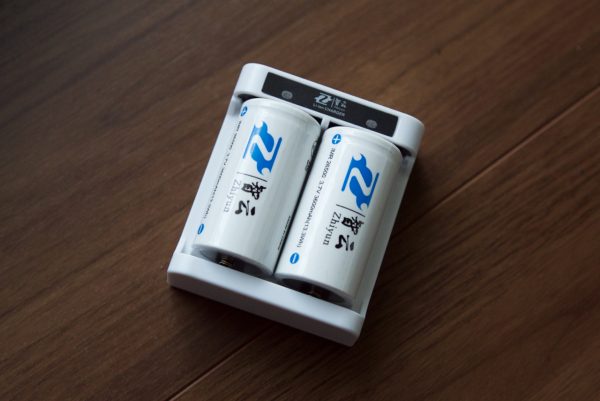 The 26650 batteries that the Crane-M uses have a claimed 12 hours of operating time. I haven’t been able to very this exact claim, but after a week of testing the gimbal I still haven’t needed to charge the batteries up. 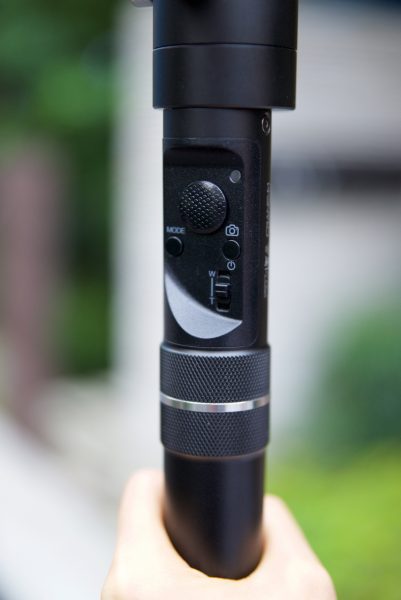 The build quality of the Crane M is very good. Every part of the gimbal feels solid and well made. It is certainly on the same level as the larger and more expensive Crane model.

The Crane M features a very familiar design and doesn’t require the use of any tools. Balancing the gimbal is quite straight forward and can be done in just a couple of minutes once you know how. That said, you do really have to observe the min. and max. camera weights otherwise you will run into balancing problems. You also have to be very careful not to use a lens that is too heavy otherwise you can’t physically move the camera back far enough to obtain proper balance. 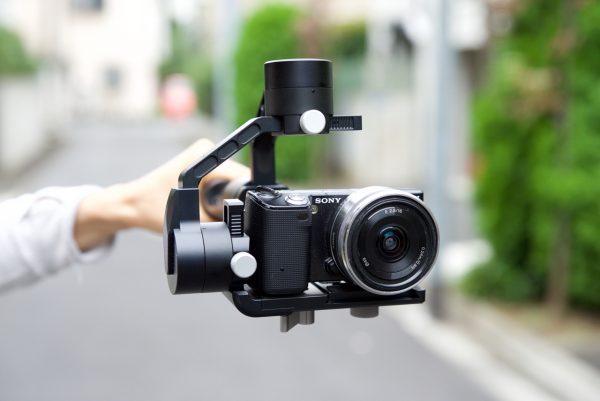 I tried the Crane M with a GoPro, an old Sony NEX-5 (as this was the closest camera I have to the weight of a a6300), and a heavier Sony a7S. I used a very small 16mm f2.8 Sony pancake lens, other lenses I had were too heavy for the Crane M to handle. The Sony a7S with the 16mm pancake lens weighed in at 550g and the GoPro with a LCD backpack came in at 240g. 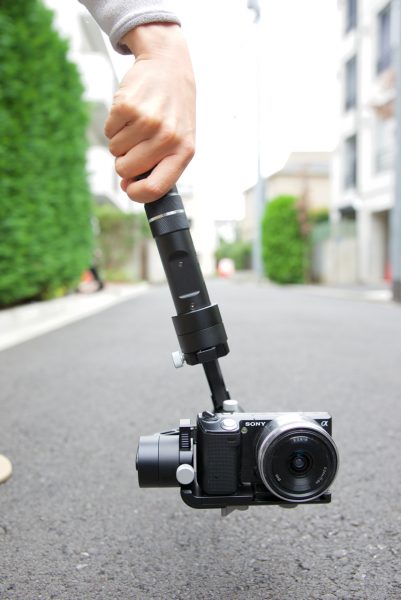 It became clear early on that the lens choices you have with the Crane M are going to be limited. A Sony a6300 weighs in at around 360g with a memory card and battery. That leaves you no choice but to use a lens that weighs under 290g. If you are using the Crane M outdoors then you will also have to factor in the weight of using an ND filter. I found the 650g maximum payload capacity quite limiting when using a small mirrorless camera.

Pan and Tilt Following Mode
In this mode the roll axis is locked and the tilting pan axix follow the movement of the gimbal. You can use push the joystick control left or right to adjust the roll angle. 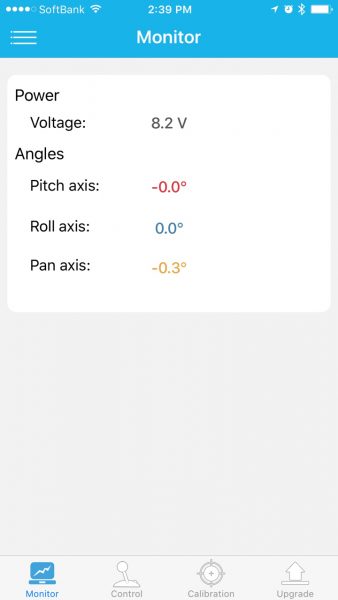 Along with the joystick control you can also use a optional bluetooth remote, or the free iOS app to control the Crane M. I like the iOS app as you can quickly check the monitor interface to see how well your gimbal is balanced. You can also use it to switch between modes and operate the joystick control remotely. There are also options to adjust the pan, roll and pitch axis. 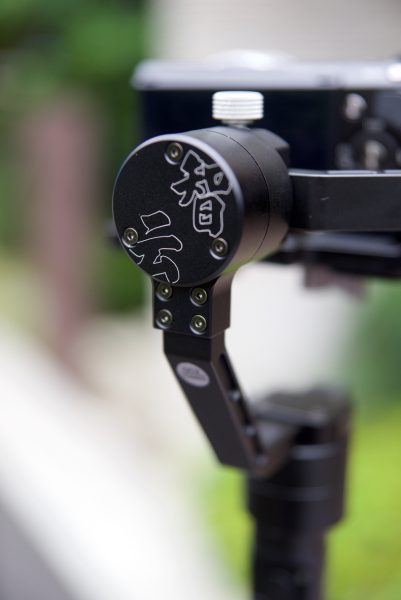 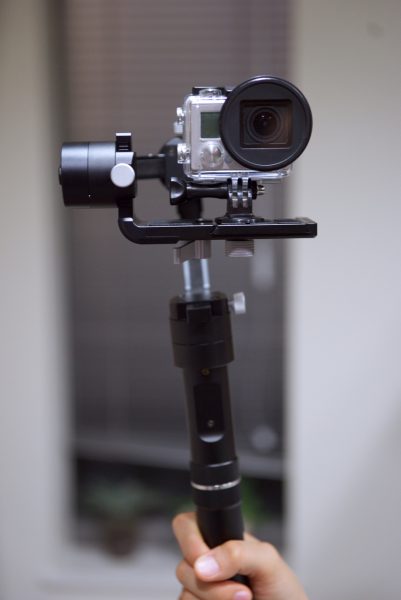 The Crane M seemed to work the best when I was just holding it while riding on my bike. Despite the bumps in the road it provided good results. 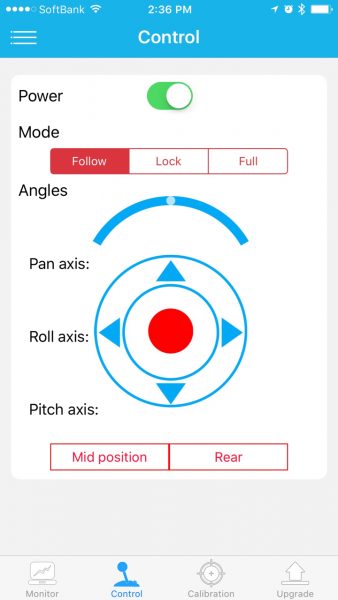 On the iOS app you can also press a button labeled REAR which is a fast way of spinning the gimbal around 180 degrees so you can film yourself, similar to the way the DJI OSMO does. I found this worked well and I was even able to run while filming myself. For video journalists this feature alone makes the Crane M worth looking at. 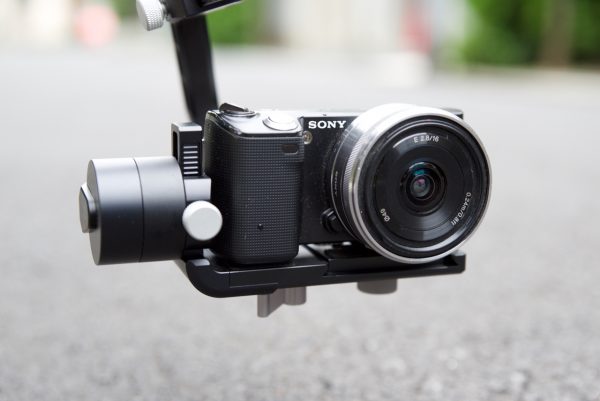 You can operate the Crane M in the normal handheld mode or invert it for super low shots. I encountered a problem when using the a7S where I couldn’t get the gimbal into inverted mode. The reason for this is that the camera is too wide and it hits the Crane M’s frame if you try and flip it. This isn’t a problem when using cameras that aren’t as wide. To be fair Zhiyun-Tech doesn’t have the Sony a7 series listed as a compatible with the Crane M. 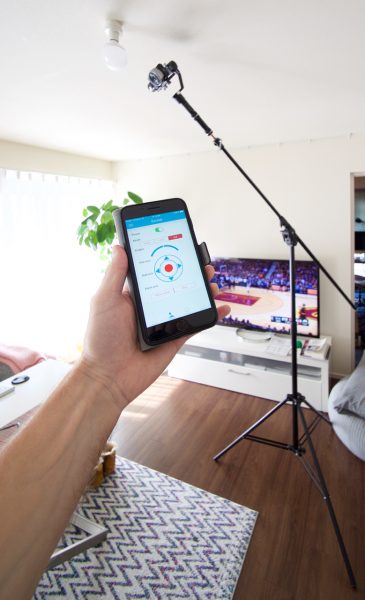 The Crane M can be attached to a boom pole or light stand via its 1/4 20″ connector on the bottom of the handle. This gives it a lot of added versatility, allowing it to be used in a variety of shooting situations. With the ability to also remotely control 360° unlimited rotation, you could mount the camera in some interesting positions and adjust your shot when need be. 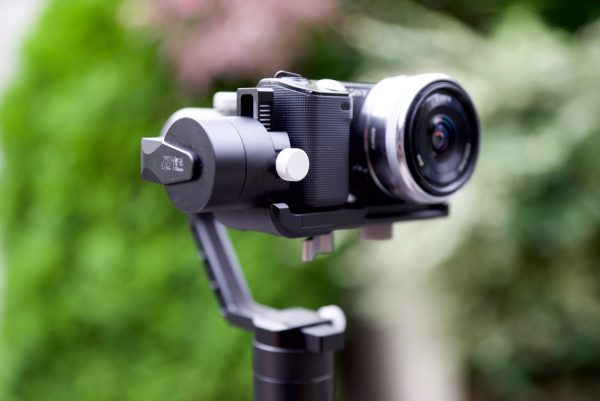 Zhiyun-Tech also offers optional camera control cables for the Panasonic GH4, all Sony mirrorless cameras, as well as the RX series and QX series. With the cable attached to Sony cameras you can control the shutter (including focus), single click the ON/OFF button on the Crane M to start video recording, and double click to stop the recording. To zoom using compatible lenses you push the shifter lever upwards to zoom and backwards to zoom back out. Zhiyun-Tech recommends the E PZ 16-50mm F3.5-5.6 OSS and E PZ 18-105mm F4G OSS when using the Sony Control Cable, although the later is possibly overweight for the Crane M with all but the smallest Sonys. 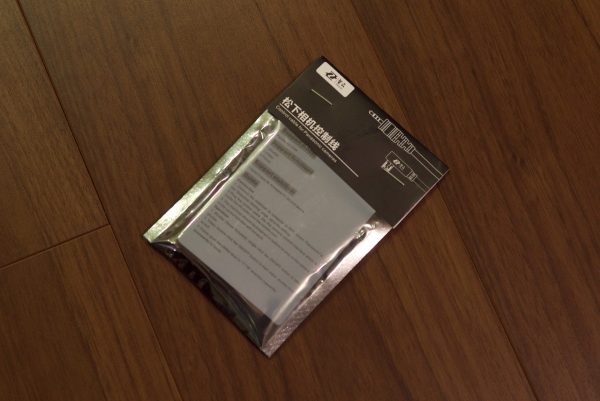 On the Panasonic GH4 you can control the shutter (focus included), as well as take photos by single clicking on the ON/OFF button. To start/stop video you double click on the ON/OFF button, and double click again to stop the recording. You can also adjust the focus of compatible lenses by pushing the shifter lever up or down. Unfortuantely Zhiyun-Tech sent out the Panasonic control cable and not the Sony one, so I was unable to test out how the control cables actually perform.

I don’t think the M performs as well as the larger Crane gimbal and it produced slightly more noticeable micro vibrations, especially when I was walking. I did find that adding a bit of post stabilisation did remove quite a few of the little vibrations I was seeing. Using the Crane M in combination with a camera with in-built 5-axis stablisation such as the a6500 might achieve better results.

The Crane M is well built, easy to set up and the iOS app is great for accessing settings and controlling the gimbal remotely. The real limiting factor to me is the weight capacity. While it may be able to take a large range of cameras, finding the right lens to use is going to be the biggest challenge for potential owners. If I was the owner of a Sony a7/a6300/a6500 or similar sized camera I would probably be tempted to look at a larger gimbal as it would give you far more flexibility when it comes to lens choice. Having not personally tested any other similar hand hand gimbals in this weight class It is hard to tell how well it compares to its competition, the most obvious at the price being the new Nebula 4100 Lite. The Crane M will retail for $499US.