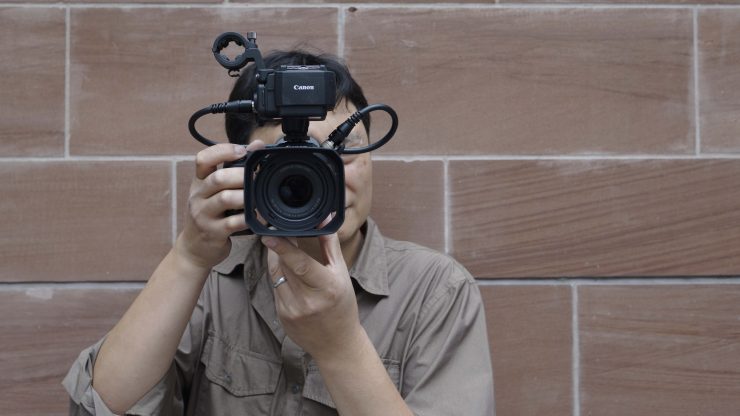 Canon have today announced an upgraded version of their XC10 4K compact one inch sensor camcorder. The XC10 has a useful combination of small size and high quality recording with high bitrates and professional codecs. An all-in-one lens with a good range, automated settings and a built-in ND filter make it suitable for less experienced shooters who might otherwise be deterred by interchangeable lens cameras.

The new XC15 launched today has a near-identical design and specification, but with the addition of an XLR audio pack for professional audio. The pack is in fact the same MA400 microphone adapter that is offered as an optional accessory for the C300 mkII. It mounts to the top of the camera and connects via a proprietary Canon connector on the topside of the camera.

The XC15 also has revised gamma settings that are closer to those found on Cinema EOS cameras. There is Canon Log (although not Canon Log2 or Log3) and also a production camera setting, as well as EOS standard for matching to DSLRs. This may sound like a minor change, but in practical terms it is very useful if you are trying to use a XC15 alongside a C300 or C100 on a shoot.

Another important addition to the XC15 spec for US users is the option to shoot in 24P.

The XLR audio pack corrects one of the biggest weaknesses of the XC10 – something I think held the camera back from being used by more productions and news organisations. In other respects the XC10 has proved a useful B camera or producer’s camera to use alongside other Cinema EOS cameras. Now that it has XLR audio it is much more suited to VJs or operators looking to shoot with as low profile kit as possible. Another function of the XC15 is the ability to lock out the menu functions of the touchscreen so that an inexperienced operator can’t unwittingly alter camera settings.

Also new to the XC15 is an on-screen waveform monitor for easier evaluation of exposure. This really should have been there all along and it’s good to see it there now.

The XC15 benefits from the latest firmware improvements that the XC10 received a few weeks ago. Autofocus seems much improved. Newsshooter’s Slavik Boyechko recently looked in more detail at the changes if you want to check it out. He also reviewed the camera before the update and you can read that here.

The XC10 received a nod of approval when it was tested by Alan Roberts. It was deemed suitable for EBU Tier 1 HD broadcasting – i.e. any news or current affairs programme. The XC15 should be near identical.

Because almost everything else is unchanged from the XC10 there are still several things I don’t like about the camera. My biggest complaint is about the clip-on LCD viewfinder which is essentially the same idea as a Zacuto Z-finder. At this stage in 2016 there is no reason why this camera should not have a proper high res EVF like those found on the a7S II and Leica SL.

The lens is still variable aperture and not especially fast given the small size of the sensor. I wish it were closer in specification to the Zeiss lens on the Sony RX10 II. The fly by wire focus is improved with the latest iteration, but I would still love to see a proper mechanically linked manual focus in the future.

These objections aside, I think that the XC15 is likely to be a popular choice for professionals in the video industry who are not primarily shooters. It is the near perfect camera for producers, interns, reporters and anyone else who might be asked to shoot video without too much training. It is also a useful B camera or day-off camera for the seasoned pro.

The XC15 isn’t going to be a cheap option. UK price is set at £2,409.99. But for news organisations it is a reasonable amount, especially considering the alternative camcorders they would otherwise be looking at.