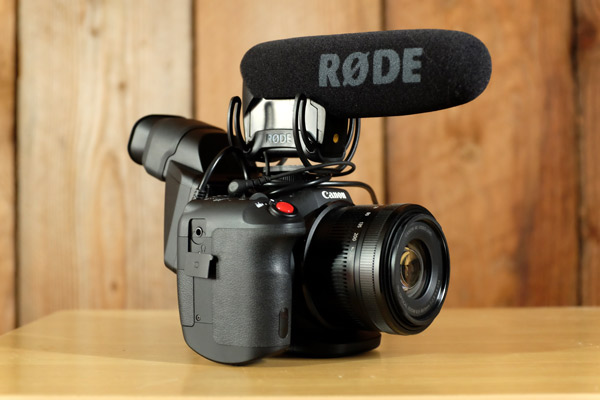 We’ve all had the same recurring dream: a small, lightweight camera that replaces our big rigs, something that we can take everywhere with us, allows us to disappear in the crowd, film the stories we see everyday around us. This camera would capture cinematic images and professional audio at a price we could all afford.

When Canon introduced the XC10 they had the opportunity to create just such a camera. A camera with the lineage of the C300 and C100, but shooting 4K at high bitrates in a compact body. Surely this was going to be it? Then came the reviews which were almost universally negative. No XLR audio, a zoom without a constant aperture, a small sensor that isn’t designed to shoot in pitch black conditions and slow autofocus. The Canon XC10 seemed to be a huge letdown for experienced video professionals who wanted to love it.

Despite the lacklustre reviews I still wanted to give the XC10 a try. Even with all the limitations could this camera be a useful journalism tool?

Canon clearly intended the camera to be used in TV and web productions but by people who perhaps don’t normally shoot on higher end kit. It has the flexibility of Canon Log recording but with simple controls. Funnily enough these are just the kind of people I encounter regularly.

My Video Dads production partner Travis and I travel around to PBS/NPR stations around the USA training people in contemporary web documentary production. The number one thing we find is multimedia journalists – web, print and radio people – who don’t have the time or skills to tackle complex video cameras, or even DSLR workarounds. However, they still want the DSLR or large-sensor look, and they want it to be super easy.

Thanks to the kind folks at Professional Video and Tape out of Portland, Oregon, I received a loaner XC10 last Friday evening, and went out with Travis on Saturday morning to a local farmer’s market to try the camera out. We shot for about thirty minutes, all handheld, and honestly it was a joyful reminder of what video journalism can be like without all the heavy gear. 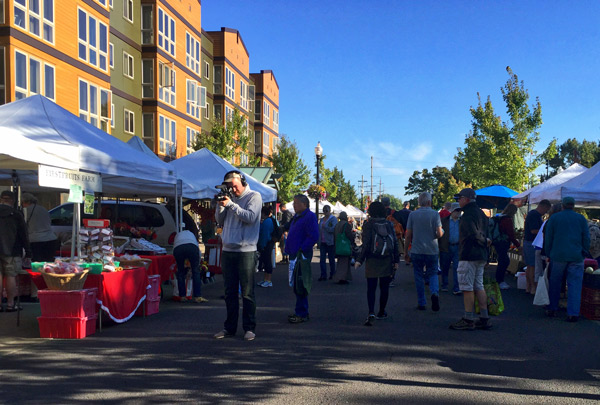 For our typical documentary work for PBS Indie America, we shoot a story for 4-5 hours with two C100 cameras and about 200 pounds of gear, including tripods, monopods, a handful of lenses, a few Westcott Ice Lights and an assortment of other lights, a boom audio kit and light stands, a couple Smartsystem sliders, and a Letus Helix Jr. for handheld shots. It adds up, and we definitely stand out wherever we shoot. 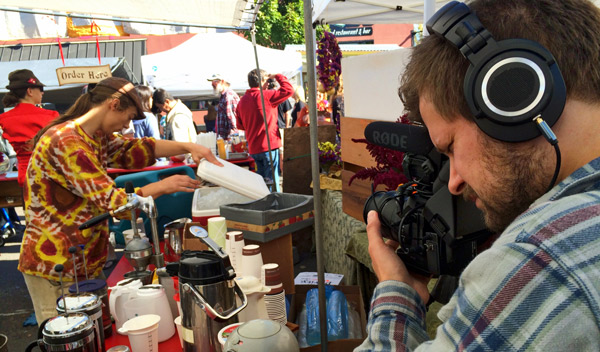 So to go completely handheld with a two pound camera was a relief, to say the least. There was another shooter at the farmer’s market with a Sony FS700 and a big dolly. He was capturing B-roll for a program about local football culture and I reckon he only got a couple of shots during the time we took to film the entire micro story. To be fair, for a normal paid gig we would have spent a lot more time shooting in multiple locations, with an actual interview setup somewhere indoors. But it certainly was liberating to walk around a crowd, find a subject, shoot a quick piece, and then have something edited and finished an hour later.

The above video is ungraded C-log, and unstabilized. For this shoot I kept it very simple, with a Rode Videomic Pro on top, and a Sennheiser G3 radio lavalier velcro’d underneath the LCD screen. I would have liked to try the lighter weight Rodelink kit instead, but mine was out on another job at the time. Nonetheless, it was an extremely light kit that still captured two sources of audio. I used a splitter cable to bring both the Rode Videomic Pro and the radio mic into the XC10, and then separated the two channels of audio in post. 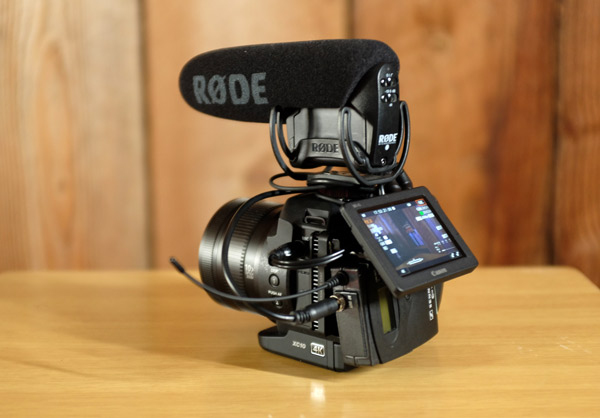 As an aside there is one thing I want to mention here: the most fool-proof method of placing a hidden radio lav on a subject is to use the Rode Invisilav. It comes with two lav inserts, but alternatively you can loop your lav through one of the inserts and out the other, to create a broadcast loop, and then just use any gaffer’s tape to stick the invisilav to your subject’s shirt. I’ve used this for dozens of shoots and it’s remarkably good. 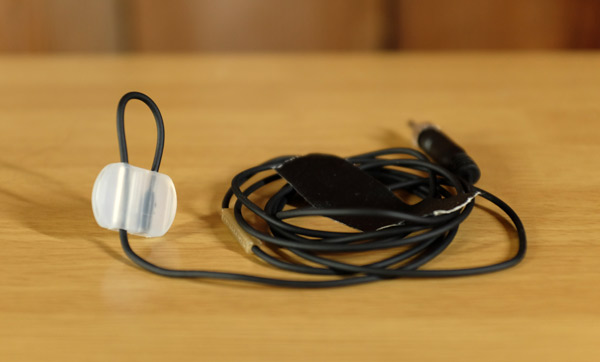 The piece lacking in this setup is XLR audio. It’s one reason why the Sony RX10 II is a popular alternative to the Canon XC10. Not only is it cheaper, but for a total cost still less than an XC10, you can purchase the accessory XLR-K2M system that’s powered by the camera and fits neatly on the hot shoe.

The lens has a great range but the variable aperture between the wide and long end does mean the exposure adjusts by a few stops when zooming in. I found the easiest approach in daylight was to set my aperture at the widest it will go when zoomed way in on a subject, then adjust the ISO to get the exposure right. Once that is done you can happily zoom in and out and use the aperture dial for quick exposure changes, knowing that you don’t need to adjust the ISO again. The exposure meter helpfully stays on the screen continually. The XC10 lens isn’t mechanically parfocal, but electronically corrects focus during zooming, much like the C100 does with the newer STM lenses.

In the end the lens was not a major issue for me. I’m used to shooting on the C100 with the Canon 24-105mm, a lens that is constant f/4 on paper but is very much variable in practice. It might be more of an annoyance for shooters who come from true constant aperture lenses, but again this camera is not really aimed for video producers who have those kinds of tools already.

I haven’t yet tried the RX10 or RX10 mkII, so I can’t comfortably recommend it over the XC10, but there are several differences in specs, ergonomics, and the powered lens. On the XC10, you can get XLR and phantom power by using a third-party pre-amp attachment. Here I have a Juicedlink RM222 with an Audio-Technica 875R shotgun on a shock-mount, and you can still place the radio mic under the LCD screen. For radio journalists learning moving imagery I think this kit can easily capture broadcast-quality audio if required. 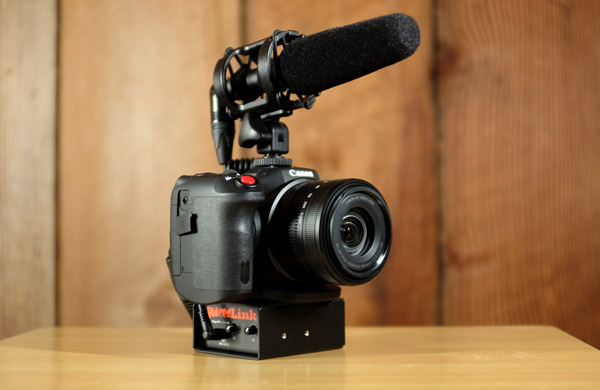 For this shoot I recorded in 4K at the lower 205 Mbps, rather than 305 Mbps, to conserve space on the Cfast card. Cfast 2.0 cards are still expensive, so I wanted to test out the very cheap Super Talent 128gb Cfast card ($80), and surprisingly it worked great (at least at the lower bitrate). I shot in ISO 500 (the lowest setting), with the ND filter (3 stops) enabled, plus the Powered IS. One thing I still can’t wrap my head around is the 2x digital teleconverter. For half the shots in the demo video, I was at 240mm plus the 2x teleconverter, so 480mm focal length, hand held (!), and it was still more stable than anything I’ve ever shot before without support.

There are a few problems with the camera that I hope will eventually be fixed with firmware. One, the fly-by-wire focus wheel is difficult to use, in that it changes speed depending on how fast you turn focus. I had set the three programmable buttons to : 1: ND on/off, 2: Digital Teleconverter, and 3: temporary AF. This is similar to the way most C100 shooters set their MAGN button to turn on/off auto-focus, but the XC10 takes about 5-10 seconds to actually focus when the AF button is held. It’s practically unusable, and the next time I would just change this programmable button to something else.

The other issue is how changing ISO is done within the FUNC menu. You press the jogwheel in, set the iso (and white balance, while you’re in there), but you can’t exit the menu with an easy double-tap on the jogwheel. So you either have to press the nearby menu button twice, or what I did was move the ISO adjustment to the very top of the FUNC menu, so you can press up to the X and exit after adjusting ISO. Of course one could use the touch-screen LCD, but the jogwheel is your only option when the loupe is attached over the LCD screen. 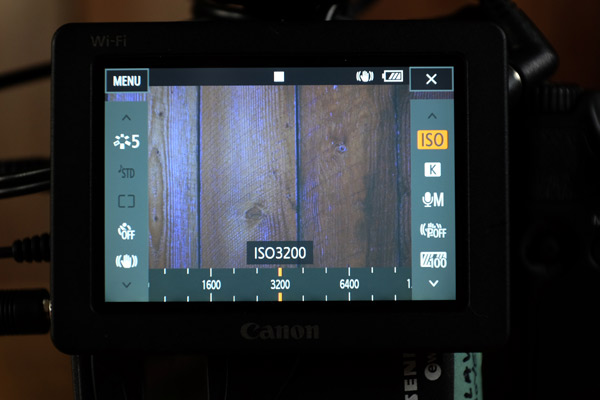 For anyone who’s shot with the C100/C300, the C-log image will look pleasantly familiar. However because of the smaller sensor, the low light image is noisier than you might expect. I found that shooting in 3200 ISO or lower worked out fine, whereas in the C100 you can comfortably shoot in 6400 or even higher ISO without too much noise. Here’s a quick look at the image noise with ISO changes.

So in the end, I realize why some pro shooters were disappointed with this camera: Its true that the fixed lens, small sensor and clunky focus are drawbacks. As a B-cam for my professional shoots, it doesn’t really make sense over the C100, unless you need 4K. Even then the XC10’s 4K image doesn’t look as sharp to me as the C100’s 1080p image for some reason. However, as an easy camera for multimedia journalists wanting to get into the video world, this might be the perfect solution. If it was $1000 cheaper and with better autofocus it would be a no brainer.

For the rest of us, having a go-to camera for those shoots where we don’t want to bring our 200 pounds of kit along…the XC10 might be a breath of fresh air.

Slavik Boyechko is a documentary filmmaker based in the Pacific Northwest, USA, and is the co-owner of Video Dads. You can follow him on Twitter @videodads.