A few days ago Canon released firmware 1.0.2.0 for the XC10, which adds a few new features including MP4 recording, improved low light shooting in HD, and most notably, better autofocus response as well as AF speed options.

The update came at a great time for me, as I was traveling to a shoot that same day, where I planned to use a C100 as B-cam to a C300 mark II. Instead, I used the XC10 as the B-cam, and relied on the improved autofocus for the entire day-long shoot. While I can’t show footage from that project yet, I did walk around my neighborhood and shot some examples of the new AF update and how it makes for easier shooting on the XC10.

In the above video, there are examples in the beginning where AF Speed is set to Fast. In a wide to medium focal length, along with the 1″ sensor size, you can expect things to be in focus pretty much all the time. But zoomed in, the new AF is snappier and more reliable as you move from object to object. It generally takes a couple seconds to snap into focus.

In situations where there is an extreme foreground and background, the camera doesn’t hunt, and instead it usually settles on either the foreground or background. But you can grab the focus wheel and manually begin to turn it in the direction of the rack focus, and the camera will finish the job. This can be especially useful if you set the AF Speed to Normal or Slow, and it will reliably rack focus after you give it a hint which direction you want to go.

Overall it’s an impressive update, and you can now depend on the AF on this camera for most of your shooting. That’s a good thing, since manual focusing on the XC10 is still terrible – sometimes you have to make multiple revolutions, which adds camera shake and makes the shot unusable. The XC10 autofocus is still not perfect, and at times can be frustrating if you’re used to the Dual Pixel Auto Focus on the C100 or C300. But it’s a nice bonus for anyone currently shooting with the XC10 or thinking about getting one. 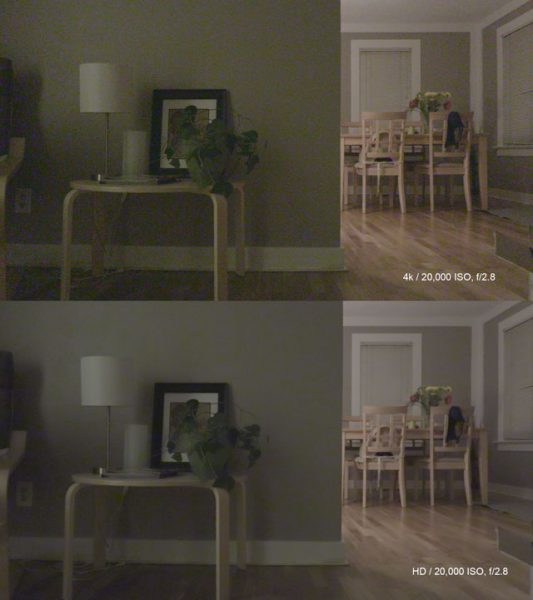 The other major part of the firmware update is much improved low light recording in HD. While I haven’t done any significant testing, you can see from the above image that the HD image, even at 20,000 ISO, has a lot (lot!) less noise than the 4k recording. This should make the XC10 a much more attractive HD B-cam to the C100 or C300 in C-log.