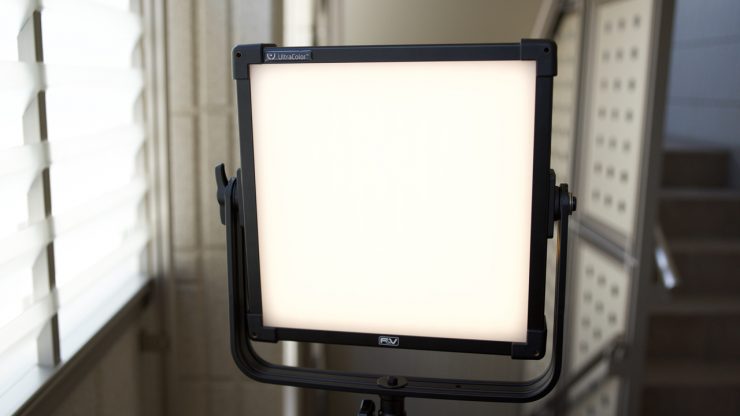 With so many 1×1 LED panels on the market the competition among manufacturers is fierce. F&V have been making 1×1 LED lights for quite a few years now, and their latest panels have been completely redesigned internally allowing for a more efficient and greater power output. I have recently been testing out their new Z400S Soft 1×1 LED panel, which as its name suggests features built in diffusion to help create a nice soft source. 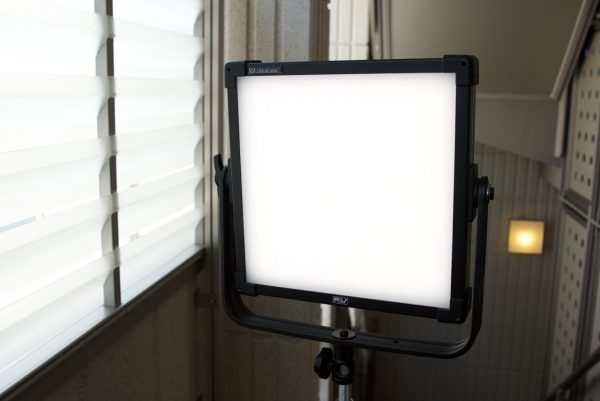 I first came across this light when they showed it at NAB earlier this year. In the video below you can see a brief introduction to the Z400S and its features.

The Z400S Soft is bi-colour and has a kelvin temperature range from 3200 to 5600K that can be adjusted in increments as small as 10K. The light is also fully dimmable from 100-0%. When I tested this I was able to get it as low as 0.2% and it was still emitting light. This is very impressive as quite a lot of other lights that are advertised as being able to dim from 100-0% actually stop emitting light at around 10%. 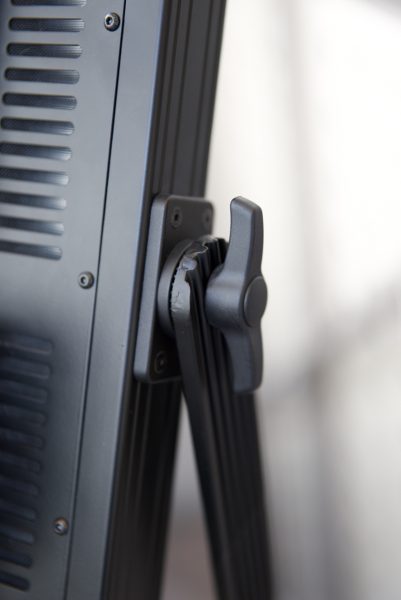 F&V have done a good job at keeping the Z400’s weight to a minimum, and it only weighs 2.2kg (4.85lb) with the yoke frame and 2.6kg (5.7lb) with the power supply attached. The build quality is good, and it feels solidly made. The controls and dials all work well and allow for very precise adjustments. The fasteners on the light’s frame lock down very securely without having to over tighten which also tells you a lot about the build quality. 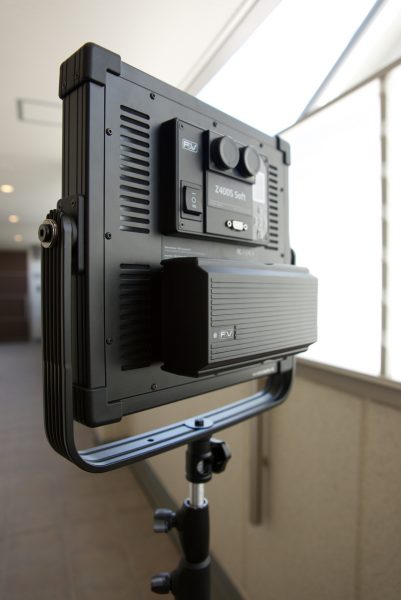 One of the clever things that F&V have done with the power supply is to make it attach directly to the light’s V-lock plate (an Anton Bauer option is also available). This means you don’t have to have it dangling off the light or wrapped around a light stand. The power supply also has a D-tap on it, so you can run other pieces of equipment as well as your light. If you prefer to run the light straight off a camera battery you can – the light’s battery plate also features a D-tap output. The light has a power consumption of 87W nominal and 90W maximum, allowing it to easily run at full power off a 95Wh camera battery. In comparison the Litepanels Bi-Colour 1×1 Soft draws 110W, which means you need a lot higher capacity camera battery to run it at 100%. This is definitely something to keep in mind if you travel a lot, as there is a limit on the number of batteries over 100Wh that you can carry on most airlines. 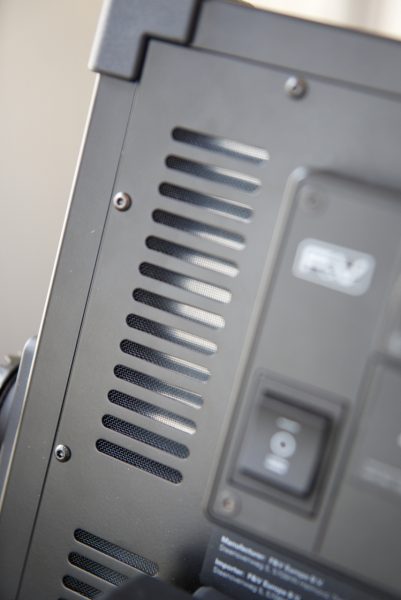 The Z400S doesn’t have a fan and uses silent passive cooling. I did however find that it got quite hot when you left it on for prolonged periods of time. This is nothing to really worry about, but something you should be aware of. 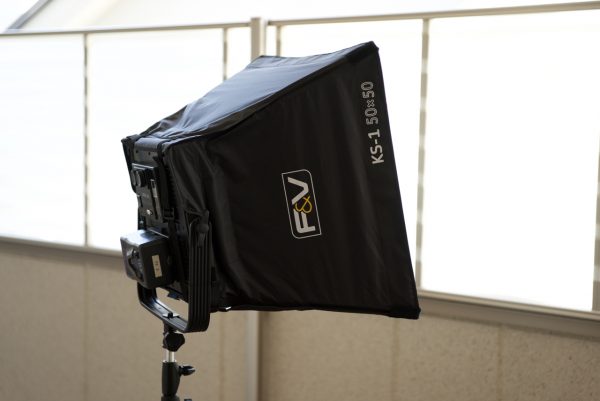 The beam angle from the Z400S is 130 degrees which is nice for illuminating larger areas. In comparison the Lightpanels Astra 1×1 Soft is 93 degrees. Most lights that come with a built in diffusion panel are designed for people who don’t necessarily want to carry around or have to use a softbox. From my experience adding a softbox to a light with a diffusion panel can achieve a really nice result, particularly when shooting interviews. If you use the optional, or included (if you buy the Premium Kit), KS-1 softbox you can reduce the lights beam angle down to 50 degrees, making it more controllable. The softbox also comes with a one-stop diffuser silk and a honeycomb grid. 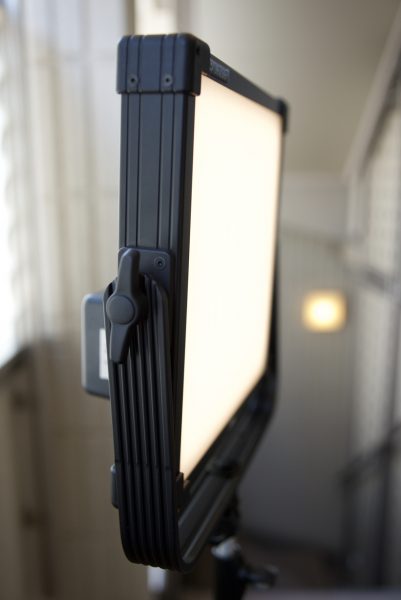 The amount of light a fixture can put out is often a deciding factor when people are looking at buying 1×1 LED panels. The only problem with buying a 1×1 LED light that has a built in diffusion panel is that you’re already cutting a lot of the potential output. F&V claim that the Z400S can output 1599lx at a distance of 1 meter when set at 3200K, and 1841lx when set at 5600K. They also claim that the output of the light remains constant regardless of what colour temperature you have it set at. I used a Sekonic C-700 to test the light’s output and below are the results I got.

If you do want to create a brighter output, the Z400S premium kit, which comes with a KS-1 softbox, has a trick up its sleeve. If you attach it to the light and don’t use the diffusion silk it acts as a light intensifier. This concentrates the light’s beam angle from 130 to 50 degrees. F&V claim that the light’s output when used in this configuration is 4400lx at a distance of 1 meter at 5600K and 3497lx when set at 3200K. I again tested this out with the C-700 and below are the results. 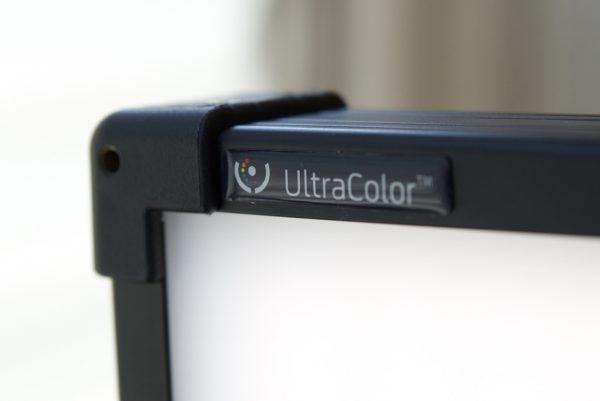 F&V claim that the UltraColor Soft series offers true color reproduction throughout the complete color temperature range. They rate their new fixtures as having a CRI of 96-98 and a TLCI of 97-99. Below are the results I got when testing the light at both 5600K and 3200K. 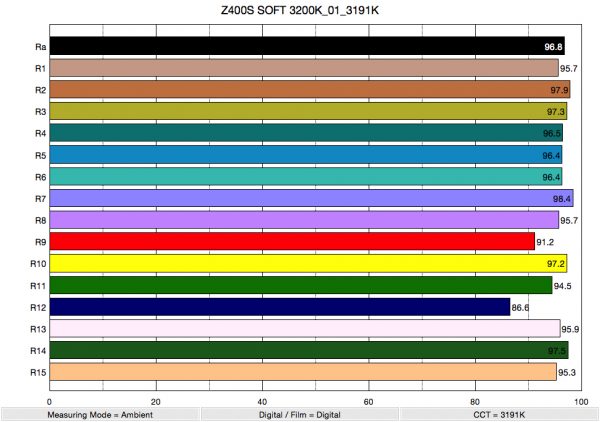 The Z400S recorded scores that were very close to F&V’s claims, although they were slightly lower than when I first tested the light at NAB. At NAB the light recorded a average CRI of 97.2 at 3200K and 96.9 at 5600K.

Again as a comparison you can see below how it compares to the Litepanels Bi-Colour Soft:

It’s quite interesting to see that the Litepanels Astra Bi-Colour Soft performs better for accurate skin colour rendition at 3200K, while the F&V beats it out at 5600K. Both lights are extremely colour accurate and the results for rendering skin tones are some of the best I have seen. What is more remarkable is that the F&V is considerably cheaper than the Litepanels offering, but it still manages to match its performance. 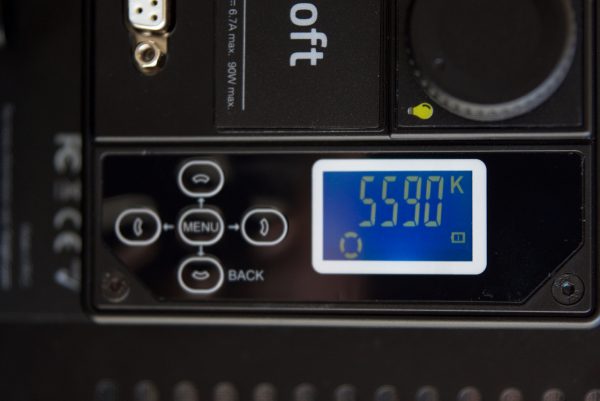 As with all lights, the facts and figures only tell half the story. The most important thing for me is how a light actually looks. The Z400S produces a nice soft source, and with a 130 degree beam angle it allows you to light up large spaces that other 1×1 panels can struggle to do. Even with such a wide spread of light, it seems to do a very good job at maintaining the brightness level all the way out to the edges. The Z400S certainly isn’t hugely powerful, but if you use the KS-1 softbox as an intensifier you can achieve an output that will be suitable for a lot of applications. 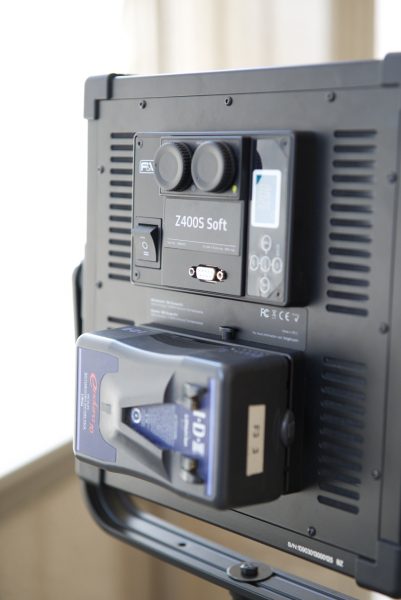 I found the Z400S to be a jack of all trades light. With its wide beam angle it’s great for lighting up larger spaces, but then by using the KS-1 softbox, extra diffusion and honeycomb grid, you get a nice amount of control which is perfect for interviews. The controls are straightforward to use and the power options have been well thought out and implemented. Most importantly it renders skin tones really well and is very colour temperature accurate. 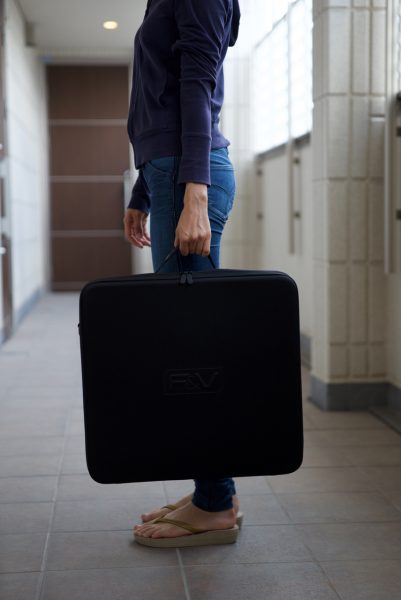 The Z400S can be purchased on its own for $989 US or €899 or you can buy it as a Premium Kit for $1099 US or €999. The Premium Kit which I have been testing comes with a Z400S panel, V-mount AC adapter, a KS-1 softbox and intensifier with silk diffusion and a honeycomb grid, as well as a nice soft/hard carry case for transportation. The softbox is very easy to attach and the soft/hard carry case feels quite robust. I’m not sure if it’s designed to be used if you’re checking in luggage on a plane, but it’s still a nice option for day to day transportation of your light. 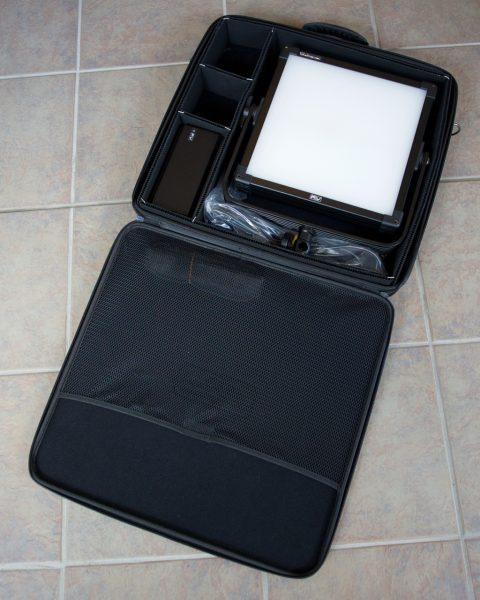 If you’re looking for a nice soft source 1×1 panel, the F&V is very hard to beat for the price. Its nearest competitor the Litepanels Bi-Color 1×1 Soft panel retails for around $1620 US and by the time you buy the optional V-mount battery plate ($148.50 US), transport case ($167 US) and a soft box ($215 US), the price rises to a whopping $2150 US. This is close to being double the cost of Z400S Premium Kit. While it doesn’t quite have the power output of a Litepanels Astra Bi-Colour Soft, it certainly matches and in some cases exceeds it when it comes to skin tone rendition, all at a much lower cost.