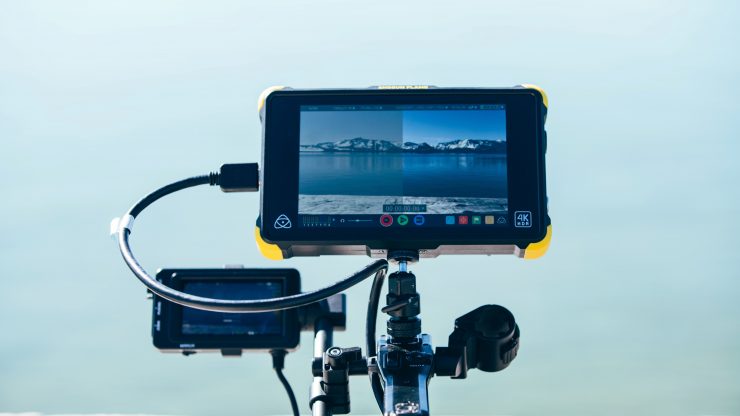 With the announcement of the Shogun Flame and Ninja Flame today, I thought now was a good time to explain what HDR is and why Atomos have made a panel that can resolve the brightness detail and colour accuracy of 10-bit HDR images. 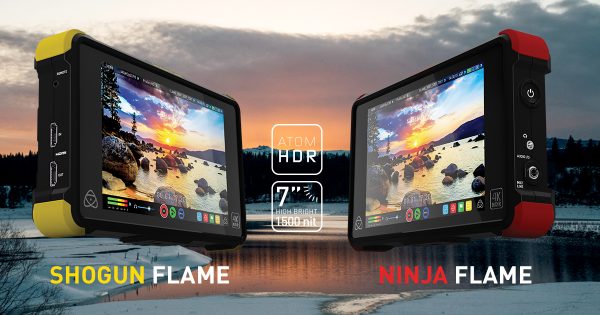 Atomos have definitely been looking ahead to the future when it comes to HDR. While HDR is still very much in its infancy, Atomos have looked to future proof (as much as you can) their Flame series of monitor/recorders. By adding HDR support now, Atomos are giving you a monitor that will still be relevant for many years to come.

So why do we need HDR and what is it? Grab a coffee because this isn’t something that can be explained in a few paragraphs.

The majority of TV displays still adhere to a 25-year-old specification called Rec.709. This is a archaic 8-bit standard that is only capable of displaying around 6.6 stops of dynamic range. These shackles on both colour and dynamic range have long been surpassed by camera imaging technology and this has resulted in Log formats being developed to squeeze a sensor’s brightness, contrast and colour capabilities into a Rec.709 image. The result is an image that looks washed out and desaturated but that ultimately contains more detail and luminance information than Rec.709 can utilise. When you combine this with the heavy in-camera compression and chroma subsampling techniques, you discover just how much of the beautiful image you’ve worked hard to create is being lost. Like MPEG Long GOP compression, interlaced images and 4:2:0 color compression Rec.709 is an outdated standard that curtails our creative abilities.

Working in Log offers us a way to get closer to the capabilities our cameras allow. Each camera manufacturer has its own ‘secret recipe’ design to maximise their own cameras’ capabilities – the aim is always to provide increased dynamic range. In real life terms this equates to the brightness range from dark shadows to spectral highlights and the ability to replicate the detail with in these with out creating a raft of noise. The ability to deliver this additional detail has up until recently be confined to the higher echelons of cinema production. Most of us have had to use LUTs to create a stylised look for colours, but by doing this we are still suffering from a compression of the luminance levels to create an image that performs within the limitations of Rec.709. 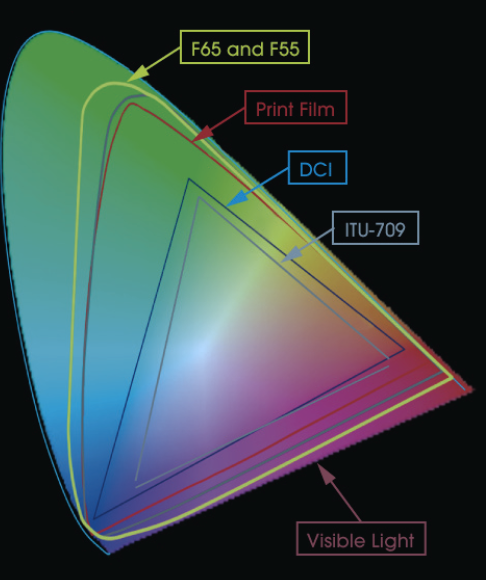 Rec.709 is not only a constraint on luminance / brightness range but also on the number of colours available. Due to this, cinema workflows that use DCI P3 and SMPTE have defined a much increased and forward looking recommendation of the next colour gamut as REC.2020. In the reality of today’s technology neither cameras nor screens can get close to achieving 100% of REC.2020 but manufactures whose cameras have the ability to shoot Log have introduced their own expanded colour gamuts. When combined with the luma benefits of Log these increase the colour palette. This gives you the ability to paint your images with a wider degree of colour graduation. When you’re shooting in Log you’ll likely be capturing in a wider colour gamut such as Sony’s S.Gamut, Panasonic Vgamut or one of the other cine gamuts available in camera. With all these additional variations available, maintaining a wider colour gamut and dynamic range is key for post production as we move forward.

This is where HDR comes in. At CES this year, the UHD alliance along with other key technology partners such as Dolby, Technicolor, BBC and SMPTE outlined the next step towards improvements in the images we watch by defining the delivery protocols for High Dynamic Range (HDR) content. The drive is towards not simply adding more pixels but creating better pixels, with the ability to enhance your storytelling ability, to ultimately deliver the magic of light and colour to your audience. Think back to 4:3 SD and the impact of 16:9 HD images, now while 4k gave us more pixels to play with HDR is going to allow you to create content that is closer to what the human eye can see.

For the HDR content you’re producing to meet the new UHD Premium standard that defines HDR consumer endpoint displays you need to be shooting a minimum of UHD 3840×2160, in a minimum of a 10-bit codec. Capturing the content in 12-bit 4:4:4 RAW provides the ultimate flexibility but for most productions as long as the signal out of the camera is a true 10-bit 4:2:2 being recorded in Apple ProRes or Avid DNx it will provide enough colour information and detail to extrapolate the hidden beauty from the log recording.

Starting at the point of acquisition the creation of HDR content relies heavily on the way you compose the lighting within your shot to create a scene with increased contrast, broad range of colour and more importantly the ability to have both details in the depths of the shadows and specular spectral highlights. Capturing the full range of these means you’ll need a camera that has the ability to shoot in a Log format, and record UHD either internally or externally. These include the Arri Alexa family as well as the Amira, Canon Cine EOS range (C300MKII, C500), JVC LS300, Panasonic GH4, DVX200, Varicam 35, Varicam LT, Red (Epic, Dragon, Weapon), the Range of Sony CineAlta family (F65, F55, F5,), the FS range (FS7, FS700,FS5) and some of the high end Alpha series. The sensors in these cameras claim up to 15 stops of dynamic range which is getting closer to the dynamic range the eye can see, but it’s often the theoretic scientific dynamic range rather than the dynamic range contained with in a single image or frame which is more likely to be around 10+ stops.

The end point delivery for HDR content (ie TVs), and consumer monitors are slowly being put into place. Content delivery networks such as Amazon and Netflix are already placing stakes in the ground on their ability to deliver HDR content. With cameras having the ability to deliver the dynamic range required for HDR, and TVs being able to receive and display HDR, what are the challenges we face in the end to end production of HDR content?

If the secret sauce recipes of Log are the key to mastering how we maintain all the colour and contrast detail in our shots then the post production process is the gatekeeper to how we deliver. As we’ve been able to shoot Log for some time now the editorial and craft editing processes are the same for High Dynamic range (HDR) as they are for Standard Dynamic Range (SDR), the cuts and splices we make do not change. Where we unlock the true beauty of what we deliver is during the grading process and the ultimate key to success here is to bring the tools of grading and finishing to the point of acquisition.

Dedicated HDR tools are emerging with in the likes of Adobe Premier Pro and Avid Media composer, and other NLEs are set to follow suit. In terms of the editorial process you’ll be able to make the same edits as you currently do when working with in the confines of SDR. Adobe has tools such as HDR to SDR conversion and NIT scales on Luma wave forms that are already in place for HDR mastering. In the above video if you skip forward to the 11-minute mark you can see the new features being demonstrated.

Here is where it starts to get a bit tricky. It is relatively easy to master content in HDR to take advantage of a wider colour space and dynamic range. Once a program is mastered in HDR, extra metadata is included so that when it reaches an HDR-capable TV it can be displayed accurately. Unfortunately there is currently a turf war going on between manufacturers when it comes to a standard on HDR. As I mentioned earlier, there is a base standard that has been agreed upon but that hasn’t stopped companies coming up with their own HDR systems. Depending on what HDR TV you buy the HDR content you can properly decode will depend on how it was mastered.

Out of the many HDR systems currently available, Dolby Vision is probably the most well-known and future proof, but it may not be the HDR standard with the most content. I have written about Dolby Vision before here on Newsshooter and if you want to find out even more you can see that article here. Like all the HDR formats Dolby Vision is a proprietary format and it requires you to have a HDR set that has a built in Dolby Vision decoder. Dolby Vision supports a 12-bit colour depth (68 billion colours) and its compatible HDR TVs are four times brighter than most other current HDR sets.

The new 4K Blu-ray discs will be mastered in another format called HDR 10. Unlike Dolby Vision, HDR 10 is only 10-bit, but it does look to be the standard that will have more available content when it comes to HDR. HDR 10 is being supported by the UHD Alliance, which is made up of DIRECTV, Dolby, LG Electronics Inc., Netflix, Panasonic Corporation, Samsung Electronics Co., Ltd., Sharp Corporation, Sony Visual Product Inc., Technicolor, The Walt Disney Studios, 20th Century Fox and Warner Bros. Entertainment. As you may have picked up Dolby is also part of the UHD Alliance, but yet it also has its own HDR standard Dolby Vision. Confused yet?

To try and overcome the problems associated with having different HDR formats, a lot of manufacturers are starting to design TV sets that will be able to conform to both standards. Companies such as Phillips, TCL and LG have already said that some of their new HDR sets to be released this year will display both HDR 10 and Dolby Vision content.

I think HDR will definitely catch on, but at the minute it’s anyone’s guess as to how long it will take to be widely accepted. Atomos are betting that it will be a part of production workflows sooner rather than later, and it is good to see them include functionality for something that is yet to be widely adpoted. It’s not often that we see a company providing a product that is designed for the future and not just the present.

Special thanks to Lewis Brown for a lot of the technical information he provided for this article.