At 17 x 7 x 2cm the Tile Light is about the size of a smartphone and very thin. The casing is made out of aluminium and feels very solid. Fitting several of these lights into your camera bag should be no problem at all.

The light output is powerful, yet soft for such a small source. To do this it uses a brand new single surface emitting technology. This has LED diodes that are encased in the light surface itself and creates a very soft output. The technology also practically eliminates the multiple shadow effect often seen when using regular LED lights without diffusion. 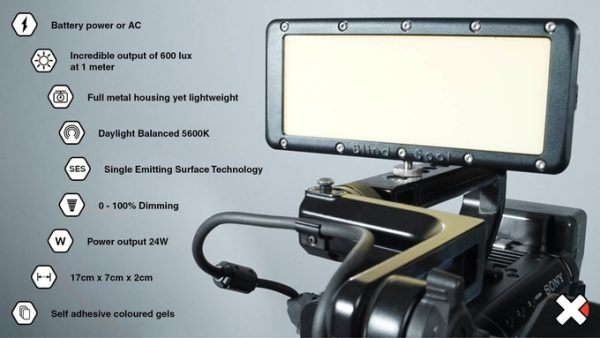 To my surprise the prototype Tile Light was brighter than the excellent Aladdin A-Light which lives in my travel bag. Blindspot claim the Tile Light is capable of 600 lux at a distance of one metre. It also had a nice wide beam which should make for a nice interview light. Blindspot claim that several Tile Lights together will actually rival a single larger fixture like the Kinoflo Celeb 200.

At the moment the light just comes in a 5600K daylight version. If you need it to output tungsten or another colour you can attach gels to the front of the light. Cleverly the front of the Tile Light has a gel like feel and when a gel comes into contact it adheres to it using static – in the same way that an iPhone screen protector works.

The Tile dims but it is not continuously variable on the light itself. Instead there are five power settings which you access through multiple taps of a button on its side. An optional wired remote dimmer is planned that will give the option for continuous dimming.

The light does not have a built-in battery. Instead an external battery or DC power source must be added. I was shown a bracket that allows Sony NP type batteries to be used. There will also be adapters to power multiple Tile Lights from a larger V-lock battery. A AC/DC mains adapter is also planned.

The light has two 1/4 20 threaded attachment points for mounting. This should make it easy to attach on an arm on top of your camera, or to light stands. A small ballhead is also supplied if you buy a kit.

The prototype of the light I saw had very good colour accuracy when measured using a Sekonic C-700 SpectroMaster Light Meter. We recorded the CRI Ra above 95. This finding is re-enforced by Blindspot’s own published data using the Television Lighting Consistancy Index (TLCI) test devised by former BBC tester Alan Roberts. The the prototype scored 92 which places it towards the top of the charts for accuracy. 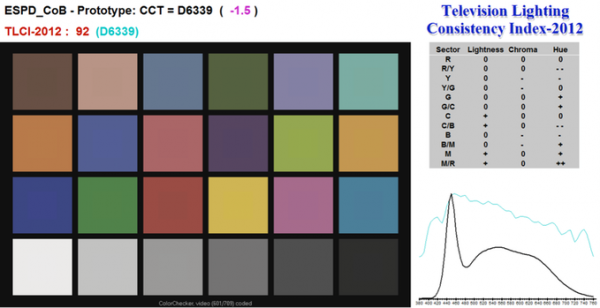 A simple interview lighting kit can be made out to two or three Tile Lights. Add more and you can create all sorts of lighting effects. Blindspot have constructed a bracket that they call the Petal. It turns several Tile Lights into a ring light for beauty shots. They also have a larger diffused spacelight type fixture in the works.

Even though we have seen a fully functioning prototype there is still a lot to be done before the light can make it into full production. For this reason Blindspot have turned to Kickstarter for the funds to get production up and running. If you back the light now Blindspot anticipate that it will ship in around six months time.

Perhaps the most surprising part about the Tile Light is its price. Early bird backers can get one for as little as £160 right now. Retail prices will be higher, but still not as much as other similar specced lights.

If Blindspot can meet their targets then they will have a serious contender on their hands. When production units are available I’ll be very interested to test how well the Tile Light stacks up against rivals like the Rotolight NEO, Cineroid LM400 and the new Litepanels Brick.

As with all Kickstarter campaigns please be aware that making a pledge does not guarantee that you will receive your reward. Projects can and do run into technical difficulties and sometimes fail. That said Blindspot already have a good track record with one successful campaign already under their belts (or should I say sporrans).

You can find out more on the Tile Light Kickstarter page.