I’ve been using the Sony FS700 as our go-to camera for the last two years or so now. I love how versatile it is: our projects range from event coverage to high-end scripted promos and most things in between. 99% of the time I can rig and set the FS700 up to handle the situation – from lightweight run-and-gun to full studio production rig. It also has a party trick: plug in a Convergent Design Odyssey 7Q+ into the back of the camera’s 3G-SDI port and the FS700 outputs a 4K RAW signal.

I used the Odyssey a couple of times on projects a year or so ago and I was impressed with the step up in quality it gave the camera. I wanted to spend some more time testing it but in a real-world production environment. I didn’t want to compare shots side by side or shoot resolution charts as I feel that, although these have their place in certain scenarios, they wouldn’t help me in learning how the hardware and software handles production environments. 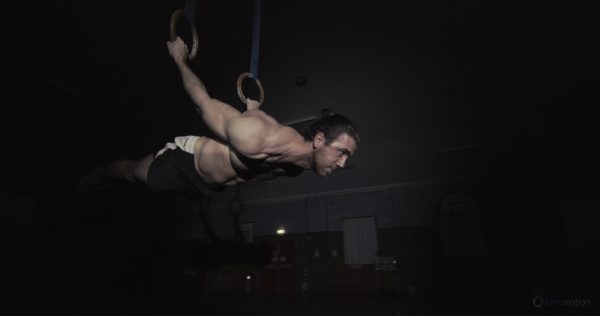 I approached Lachlan Walker and Tyson Edwards towards the end of last year to see if they were interested in collaborating on a shoot where I would make a short promo for their business (Ring Fraternity) using the FS700 and Odyssey7Q+. I felt the quality of their downright crazy skills on the olympic rings would match the potential quality the Odyssey 7Q+ would give me. Thankfully they were really up for it. 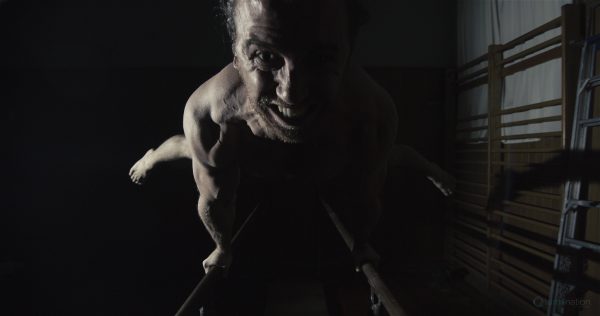 We met at Burwood PCYC gym in Burwood, Inner West Sydney on a fairly miserable Wednesday night. I loved the location – with its slightly dated and dusty facilities it contributed to the feeling that while you and I are at home watching TV, these guys are still working out after dark!

The idea was to use only one key light source in the gym to light both the interviews and the overlay vision – we used a Lupolux 650w LED Fresnel. I really love the colour of these lights and the skin tones they give, especially when you do a manual white balance on the FS700 using them as the main source. I felt that the use of strong lighting like this would show off the physique of the athletes without the viewer getting too distracted by the background.

The ‘money shots’ were Lachlan and Tyson on the rings, showing off their skills, so I wanted to show as much action as possible with minimal interview vision in the final edit. To give these shots the edge, the help of a steadicam was definitely needed! I have never tried to fly the FS700 with an Odyssey7Q+ on a Glidecam (with vest and arm) before so my plan was to spend the afternoon before the shoot finding a nice solid way to rig it up. As so often happens, time ran out and I found myself frantically trying to find a way to balance it half an hour before the shoot. I settled on a not-so-handy setup with the recorder balanced directly on top of the camera, facing up. The major flaw in this technique – I couldn’t see the screen whilst flying and instead I had to use the monitor on the FS700 itself as a guide. On the upside, this setup was nicely balanced, and using the FS700’s monitor was a reasonable compromise. 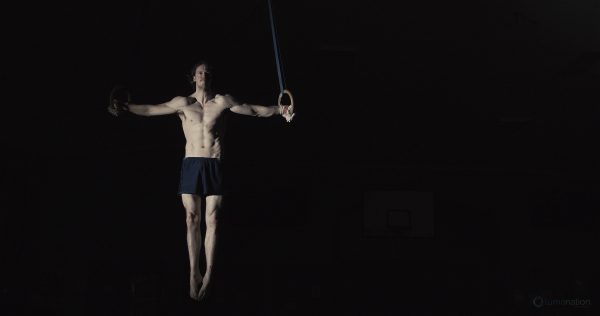 I was aware that when shooting 4K on the FS700 the picture profile must be in SLOG-2 mode. Having a base ISO of 2000 means that it is quite noisy, but I honestly wasn’t prepared for the amount of noise that comes with this cine gamma! I think if I was shooting during the day with nicely sunlit scenes then maybe I wouldn’t have noticed it too much, but shooting in this dark gym with one key light really accentuated the noise bed. Luckily, having done a bit of prior research of shooting in LOG, I did slightly overexpose the shot and managed to crush most of the noise out of the image in post. There are still a few shots in the video where I can still see the noise remains so I will definitely be keeping this in mind on future shoots. 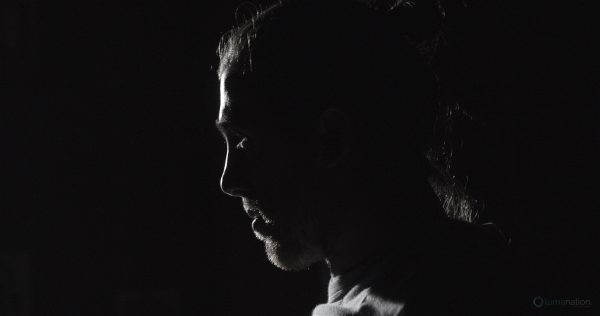 The menu system and overall experience of using the Odyssey 7Q+ was very pleasant and I found everything to be solid and well thought-out. I did enjoy having all the camera and recorder’s information turned off on the the screen, as having all that clutter on the picture itself is as one of my bugbears with Sony cameras.

The video was shot in either 4K ProRes 10bit at 25 frames per second or 2K ProRes 10bit at 50 frames per second, using a Tokina 11-16mm (steadicam), Canon 24-105mm with speedbooster and a Rokinon 35mm prime. It was also mildly irritating having to wait a few minutes every time I switched from 4K 25p to 2K 50p, however just being able to shoot in these formats was incredible coming out of a camera like the FS700 so I’m definitely not complaining!

Overall I’m very impressed with the capabilities the Odyssey 7Q+ gave our little FS700 – it definitely turned it into a different camera, and one that can play with the big boys. I would absolutely love to see a viewfinder version of the Odyssey 7Q+, but I don’t imagine that is possible right now: I doubt the amount of technology squeezed into the unit could get much smaller.

The big question is whether to buy a Sony FS7 and sell the FS700, or keep the FS700 and purchase one of these recorders – I feel either option would be a great buy and offer good bang for your buck.

This video test was made possible by the good folks over at The Front camera hire who were kind enough to loan me the Odyssey 7Q+ for the night to shoot this promo. If you need to hire gear in and around Sydney then check them out – they are a great bunch of guys!

You can find out more about Paul’s work and contact him at http://www.lumanationvideoproduction.com