Ever since the AF100 was launched (which seems like an eternity ago) we have been waiting for Panasonic to release their next large sensor pro cam offering. We waited and waited, and then waited some more… but nothing. The sound of silence was deafening as companies like Canon and Sony announced and then shipped countless cameras.  Well the wait finally seems to be over. Hot on the heels of the GH4 announcement, Panasonic has officially announced that its 4K Super35mm sensor Varicam will be unveiled at NAB this year. This is hardly surprising news as we first saw a mock-up of the camera at NAB two years ago, and again at IBC, but after a years of teasing we will in finally get to see the production version.  Our own editor Dan Chung caught up with Noriaki Ugo from Panasonic at Interbee last year where he hinted about the cameras release and talked about their new codecs for it. You can see that video here. 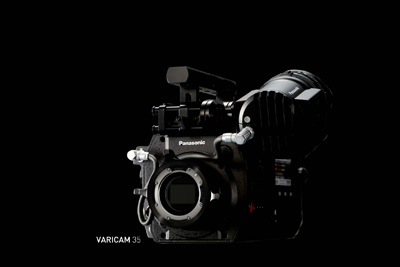 So let’s look at a quick breakdown of the features that the camera will come with (this of course is always subject to change until it actually ships). The Varicam 35 (we’re not  100percent clear whether this will be the actual name) has a Super 35mm MOS sensor that is able to record Ultra HD and 4k (4096×2160 in a 17:9 aspect ratio) and features a modular design. The design is somewhat similar to a Red Epic or a Sony F5/55. Apart from Arri it seems everyone else, including Panasonic, seems to believe the modular brick design is the way to go.  My personal opinion is Arri seem to be the only ones that understand what the end user wants and design cameras that look like cameras! What Panasonic seem to have borrowed from Arri is that the Varicam 35 actually consists of two pieces – a camera and a recorder. This is very similar to an Alexa M, where the camera and recorder can be broken apart and is something I think Sony should of done with the F5/55 R5 raw recorder.  With the F5/55 the R5 recorder has to be physically docked to the camera. Strangely enough if you use it with the FS700, with the interface unit, you can have it detached from the camera. What is clever about the Panasonic system is that because it is modular the recorder can also be paired with a 2/3 inch camera module via an umbilical cord, allowing the camera to be placed on jibs or robotic arms in a broadcast environment.  It is currently unclear whether Panasonic plans to introduce or feature a 2k crop mode, like the F5/55, to allow the use of 2/3in broadcast lenses on the Varicam 35.

AVC Intra has always been a very high quality codec and is widely used in the broadcast world but to record 4K and HFR material Panasonic will be using the AVC Ultra codec in a 444 colour space at roughly 240Mbps. This will be recorded to P2 express cards and micro P2 cards.  Like a lot of previous P2 cameras that our readers will be familiar with, the recorder will have four slots available for media. There is no indication of media prices but based on past prices P2 media is not cheap. To be fair though, it will probably on par with Sony SXS cards in terms of price. In terms of record times a P2 card can get you 130 minutes of 4k 24p footage. The camera has 4 slots for media; two for express P2 and two for micro P2  You may be thinking, how do they manage to get that much 4k material onto a single card?  Well remember this is compressed 4k. The camera will be able to handle 4k raw but it is unknown whether that will be internal or outputted.  I am presuming it will have to be outputted to a completely different recorder.  For the market they are targeting I really do think this is a smart move.  4k raw is just not practical for a lot of users in the broadcast, news and documentary environment, where this camera is squarely aimed. As well as 4k you can of course record HD, as well as 2k and proxy files.  The proxy files offer a great option for quick turnaround of material as they can be recorded as low as 1.5Mbps, offering offline editing capability. The proxy files can be recorded simultaneously on to the same card as your AVC Ultra material.

The Varicams of the past really did set the standard for HFR (high frame rate) capture and the Varicam 35 is no exception. There will be no buffering here!  It, incredibly, will be able to do 120fps in 4k and up to 240fps in HD. Using the 2/3in camera module I can see this being very popular for capturing live sporting events and concerts. This is very impressive to say the least, and offers the end user a lot of versatility. 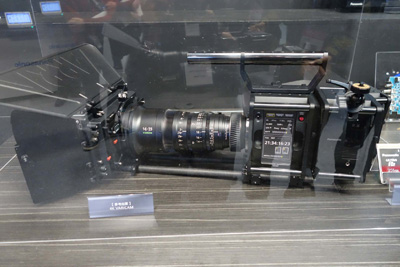 As far as dynamic range goes Panasonic is touting 14 stops, which is on par with its competition.  The camera will come with a PL mount and I’m sure there will be a range of aftermarket adaptors to allow the use of other types of lenses. It also features quad 3G HD SDI connections, to allow for an uncompressed output as well as a single HD SDI, for monitors etc. Another great feature that we haven’t seen before is that the camera’s control panel, where you change all your settings, and it can be removed from the camera body for remote operation.  So if you have the camera on a jib etc, you can just pop out the control module and operate it remotely.  It is still unclear how this will work but I am presuming it will use WiFi. The Varicam 35 also features a OLED viewfinder with optical eyepiece magnification.

I’m not going to jump to any conclusions about this camera but I will say I think it looks like a great offering from Panasonic.  It seems to meet a lot of the requirements shooters are looking for in a camera these days.  Panasonic, like Sony, have a very long heritage in broadcast and they offer capture to transmission solutions that appeal to a lot a TV networks. While some may think that this announcement is more than a year too late, I applaud Panasonic and welcome them back into the game. Being first to release your product gives you a big advantage over your competitors.  All you have to do is look at the success of the C300, and now the F5/55, to see how getting your camera to market at the right time can mean the difference between success and failure.  A lot of productions and live events have started to shift to cameras like the F5/55 and away from traditional HD broadcast cameras. The Varicam 35 is squarely aimed at that market and seems to be a real competitor, probably to the F5 more than the F55. How it performs, and how widely it will be adopted, only time will tell.  Canon I’m sure will be making an announcement at NAB, and Sony have hinted at more development and features becoming available for the F5/55, so Panasonic have a fight on their hands.

There is no pricing yet but I would expect that it will be in the vicinity of the Sony F5.  The Varicam 35 is scheduled to start shipping in autumn (later part of 2014).

Welcome back Panasonic we have missed you!

Newsshooter.com will be taking a more closer look at the Varicam 35 at NAB this year.