This week Tom Waugh, a remote camera operator at Aerial Inspections, sent me an email to let me know that his outfit were one of the first to take delivery of the Blackmagic 4K Production Camera (BMPC4K). The challenging handheld ergonomics and lacklustre low light performance of the BMPC4K have already been discussed on Newsshooter but other aspects of the camera make it a great candidate for aerial shooting. Specifically the global shutter should eliminate rolling shutter (jello) effects often seen in DSLR aerial footage. Couple this with 4K resolution (that can be used effectively for HD crops) and there appears to be nothing else at the price that can compete. Tom saw this potential and got the camera in the air almost immediately.

With drone footage now making the news in places like Ukraine almost daily it is interesting to see just how a high-end octocopter performs when you pair it with the BMPC4K. Interesting times indeed.

This is what Tom had to say:

Aerial Inspections was lucky to take delivery of one from the first BPMC4K cams in Australia.

Flying with the Blackmagic 4K Production Camera is great. The simplicity of the form factor and strong aluminium mounting points make setup and balancing easy on the MoVI. Global shutter means our fly-bys, pans and fast flying forward moves aren’t affected by rolling shutter artefacts that we have had previously, particularly with Blackmagic Design Pocket Cinema Camera and of course DSLRs. The vast majority of our aerial work is in daylight so the limited ISO 200-800 of the BMPC4K satisfies. We can also fly Red Epics or Canon 1DCs on our setup, so if we need low light sensitivity we can use those cameras instead. We haven’t had any sensor issues such as bright pixels that some others seem to be experiencing with the BMPC4K.

We have been busy rigging it on our custom X8 configuration octocopter and Freefly Movi stabiliser. Because the camera only has a SDI output we had to work out the best way to add a HD-SDI to HDMI converter so we could feed our Teradek Clip wireless transmitter. To do this we used the Ikan Blackmagic Baseplate Kit and underslung the camera from the centre top 1/4” 20 screw mount.

Next week we will rig our RTmotion MK3.1 wireless follow focus and our very soon to arrive Teradek Bolt Pro 2000 HD video link. The Bolt Pro will mean no more SDI to HDMI converter for either the BMPC4K or Red Epic setups. We will then power the whole rig off a 4S 2600mAh LiPo, meaning no cables interfering with the MoVI’s stabilisation. 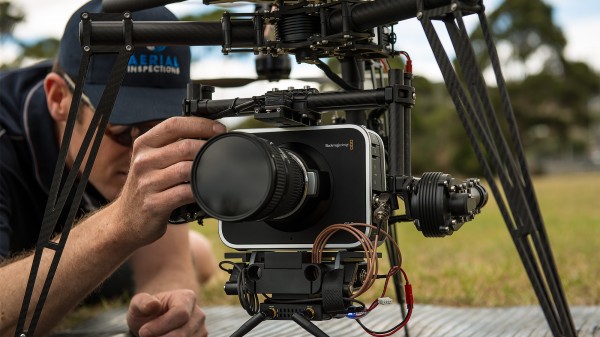 This footage was shot at 3840x2160px 25fps on the Nikon 20-35mm set at 20mm f8. The lens was fitted with a Tiffen WW-IR ND1.2, and all footage shot at ISO 200. It was a windy day down here in Tasmania so we didn’t get to fly much before the gusts were just too strong.  We are looking forward to more flights and handheld MoVI shoots with the BMPC 4K around beautiful Tasmania soon.

You can find out more about Aerial Inspections on their website.