Alex from Matthew Allard on Vimeo.

This week I enlisted the help of Wushu expert Alex Leng to test the performance of the new Convergent Design Odyssey 7Q when recording 2K RAW at 240fps from the Sony FS700.

Wushu is both a full contact and exhibition sport that has been derived from traditional Chinese martial arts. Alex has been training in the art for a decade. We decided to shoot a short at the Gao Wong Ye temple in Kuala Lumpur, Malaysia. We only had a few hours but I thought I’d make it fun and pay homage to some of the classic martial arts movies of the past.

So to the technical stuff – be warned 2K RAW at 240fps eats up a lot of storage space in a real hurry. . There was only 10 minutes of record time available using two raided 256GB Convergent Design drives (they need to be RAIDed to do this). More worryingly having the Sony FS700 set on S-Log2 (2000ISO) does induce a lot of noise and the problem is exagerrated when shooting high frame rates. In S-log2 the camera is set and can’t go below 2000ISO when using S-log2 and this is a problem. It is possible to not use S-log2 but then you are forced to bake-in a look.

To be clear this is not a problem with the Odyssey 7Q record quality – this is an inherent problem in the way the FS700 RAW and S-log output works. 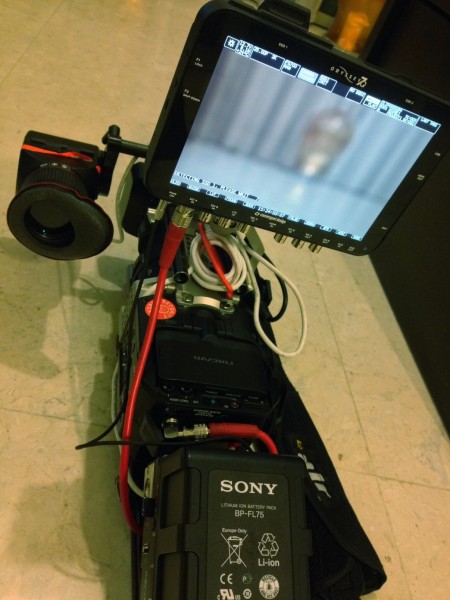 One major issue is workflow – it is slow working with high frame rates, 2K RAW and the Convergent recorder. With the 7Q setup you first need to copy the drives to another location and then use Convergent’s Clip Merger software to merge the raided files into a single file. The files then need to be brought into Davinci Resolve to be converted before editing. This entire process took me many hours before I as even able to start editing.

To be fair to my FS700/7Q setup any form of RAW video is complex – I keep asking myself whether it was worth going to all this trouble to record 2K RAW? For the majority of news and documentary shooters RAW is overkill and really isn’t needed. It’s like having a car that can do 250kp/h but never actually needing to go that fast.

RAW does have its well documented advantages but it comes with a lot of conditions that many users aren’t fully aware of. For what I do I really don’t see RAW offering me that big of an advantage over shooting to a good compressed codec. I think many shooters often get caught up in a numbers game when it comes to codecs and bit rates. Absolute technical quality is one thing, but I tend to judge things by my eye and not what scopes, specifications or manuals tell me. I’m not saying that they are irrelevant, simply that we live and shoot in a real world.

Unless you really need to record 240fps continuously (and with the 7Q you only get 20 minutes of that if you use two 512GB drives), then I think it is just as easy to use the end trigger on the Sony FS700 and record the output to an external recorder when it is rewriting to the internal SD card from the cameras buffer. That way you get a higher quality source that wont be recorded as AVCHD. This is a lot quicker and more efficient way of capturing high frame rate material from the FS700. Several other Prores external recorders from the likes of Atomos and AJA will do this already and you don’t specifically need an Odyssey 7Q.

This way you can see what you are recording and play it back straight away on the recorder – something you can’t do in RAW on the 7Q (because the 2k RAW HFR has to be striped across both SSDs). I found incredibly frustrating when shooting this short.

At the end of the day time is money and RAW is not something you can take shortcuts with. Given the noisy FS700 S-log2 output I am not planning to shoot RAW at high frame rate with it again anytime soon.

I’m hoping that with the new compressed codecs coming to the 7Q soon, you will be able to use them in combination with continuous high frame rates. For me and many others I think this will be a far smoother and faster work flow.

Despite these difficulties the Odyssey 7Q has performed flawlessly so far and the OLED monitor is a joy to use.

The video was sdited in FCP 10.1 using the new speed blade tool (which is very easy to use). There was only very minor colour adjustment and no special effects or grading programs were used.