JVC are the latest company to enter the large sensor 4K market.  They have now joined the likes of Sony, RED, Blackmagic and Canon in the industries push towards 4k.

Enter the JY-HMQ30 (there’s a mouthful!) with a 1.25″ CMOS, 8.29 million pixel sensor.  It comes with Nikon F-mount for using interchangeable lenses. The apertures of newer Nikon lenses can be controlled from the camera body, older ones work by simple closing the iris. There appears to be no autofocus.

It can record 4K (3840×2160) MPEG4 at up to 60P onto a SDXC or SDHC.  The 4K image is divided and recorded onto four separate cards simultaneously.  To do this it uses a fast image processing engine that JVC calls Falconbird.  Four 32GB cards records 2 hours of 4K material.  Four 64GB cards will let you record 4 hours. If you are filming in HD mode you can record in AVCHD to just one SD card.   The 4K material is redcorded at a VBR (variable bit rate) at up to 144Mbps in MPEG4 AVC/H.264.  In HD mode it records also at a VBR at up to 28Mbps. Gain can be set at either 0dB, 2.5dB, 6dB or 12dB. 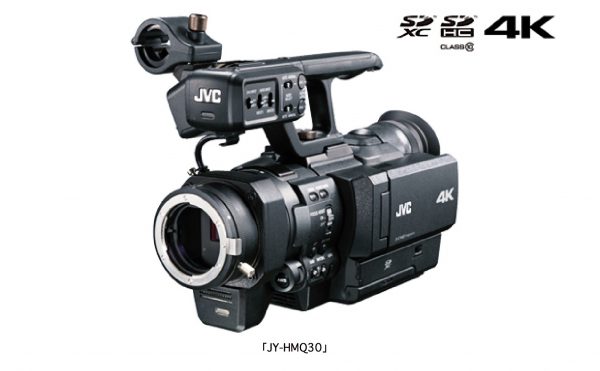 To make the 4K image span the four SD cards JVC uses what it calls edge blend processing.  What this does is where the four HD images that make up the 4K image overlap, it seemlessly blends them all together so you cannot notice that the images are stitched together.

It is a true world camera enabling both PAL and NTSC.  Frame rates are 24p, 60p, and 50p. Strangely enough the specs don’t list 25p but maybe that is an oversight.

The camera also features a time-lapse mode that enables recording at with 1, 5 or 40 frames per second.

It does not appear to have any ND filters so you would have to use a matte box or variable ND to control light.

Audio wise it comes with 2 XLR connectors that can be used in either line or mic configuration. Phantom power can also be provided.  The audio can be set to either full manual or auto.

It has focus assist and a histogram as well as a wired remote control that provides stop/start recording..  The LCD monitor is a 3.5″ display and you also get a 0.24″ electronic viewfinder.

Using 4 mini HDMI (version 1.3) outputs you can playback 4k at up 60p in full resolution off the camera to an appropriately equipped 4K display.

There is also a tool called full HD trimming to playback 4K material on a HD screen using a single HDMI cable.  Now this doesn’t scale the 4K image it just enables you to show a portion of it.  By touching the LCD screen on the camera it zooms in on the 4k image and displays the portion of the screen in full HD.

JVC offer software to manage 4K images called 4K clip manager. It can be downloaded from their website for free.  The software integrates the data that is reordered on the 4 SD cards and integrates them into one single 4K file.  The 4K file can also be converted from MPEG4 to Prores 422.  It is currently supported by Final Cut Pro (no indication of what version) and Grass Valley’s EDIUS editing system.  No details of support for other NLE systems are mentioned at the moment.

The camera was developed after Japan’s transition from analog to digital broadcasting in 2012.  JVC goes onto say that people have become used to HD images and there has been a push my manufactures to push out 4K flat panel displays.  Last year JVC developed a 4K handycam called the GY-HMQ10 – now this new camera is based very much on the same features such as recording on low cost SD cards enabling long record times.

The camera will retail for close to $17,500 US and they have started taking orders from June 13th.