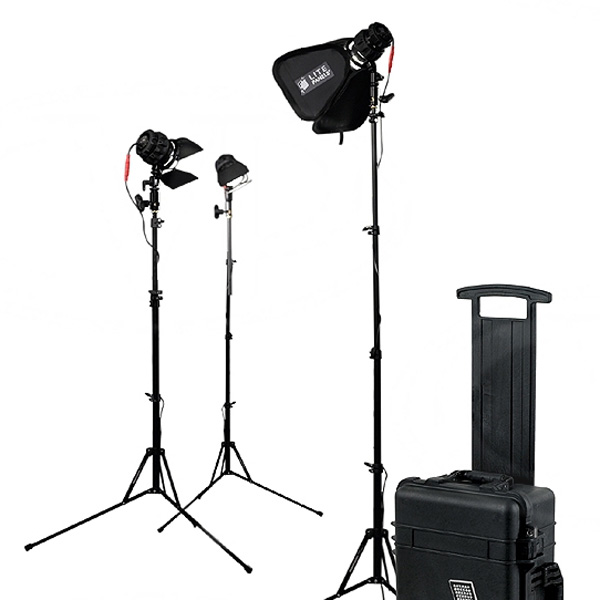 I originally saw the Litepanels Sola ENG lighting kit at NAB and was keen to try it out in a real world situation –  I spend over 300 days a year on the road, in a variety of different countries, covering a large array of topics. An assignment in Mongolia was the perfect opportunity to test it; I needed something that was not only light and portable, but that would also be up to scratch in any situation.

I was originally drawn to the lighting kit by the fact it’s a very compact lighting solution.  In news and documentaries it is important to be quick, mobile and work efficiently – I am often given only 5-10 minutes to set up lights for an interview so sometimes I have to compromise.  There are also a lot of situations where I have no access to mains power, so I need lights that can be powered by other means.

The kit basically gives you everything you need for a three point lighting solution in the one box.  You get three Sola ENG 3″ daylight Fresnel LED fixtures and three each of the following: 2-way barndoors; D-tap power cables;  ball head shoe mounts that attach to TVMP adaptors; 1/4-20 adaptors; gel filter packs that include 1/4 CTO, full CTO and a diffuser; and multi voltage power supplies.  Also included are 3 Manfrotto nano stands and one soft box with a diffuser.

This whole kit weighs about 12-13kg and comes in a FAA approved carry on size Pelican case (my normal lighting kit is a lot bigger and weighs in at about 22kg without light stands). It’s maybe a bit ambitious to think you could carry it on to a plane given the strict weight limits of many airlines, but it’s a bonus that it is at least the right size if they don’t stop you on weight grounds. The Sola ENG pelican case also has a pull up handle as well as wheels, which is very nice.  I am always looking to make my kit smaller and lighter.

They’ve incorporated some very smart design features into this kit. The lights themselves attach to a ball mount that has a cold shoe adaptor at the bottom. This in turn can be attached to a light stand using the TVMP adaptor.  It is good to see a light that comes with mounts included so you can mount it on a camera or a light stand without having to buy accessories or find a third-party adaptor. The actual lights themselves use a fresnel design so they are fully spot/flood adjustable from 15 to 55 degrees.  They are also fully dimmable. The barn doors just clip onto the front of the light and can be taken on or off depending on the application.  If you want to use gels then you need the barn doors on. 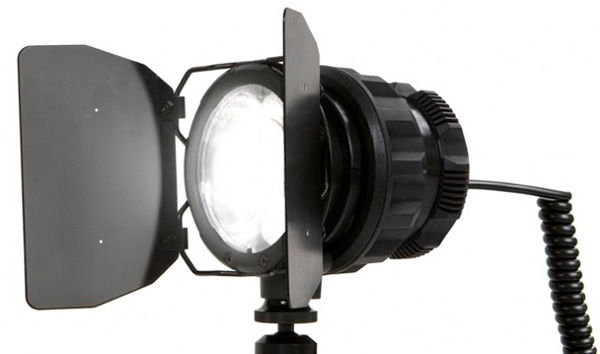 It does come with a really clever little soft box (although you only get one in the kit) that folds flat and that you just pop on over the light when you want to use it. Now, this is where I encountered a small problem. Because the soft box just sits over the top of the light and doesn’t clip on, when I had it on a C-stand and the light was facing down, the soft box would fall off.  Also, you can’t fit the soft box on with the barn doors on, so you can’t put any gels in when using it.  So you can’t use a soft box with a CTO filter.  The other small problem is that the kit comes with D-tap cable adapters, but they are so short that they are unusable when the lights are up on stands. You can buy 10′ D-tap extension cables, but they are not included in the kit.

How did it perform?  The first thing that impressed me was how quick it was to set up the kit, leaving you more time to actually light. The lights have a very nice feel to them and the adjustments are smooth and precise.  For small lights they provide a lot of punch; they are only 30W, but this is apparently equivalent to a 100W HMI. They also only draw 10-20V of power and they run completely cold, generating no heat – you can have them on for hours and then just grab them with your hands and put them away immediately. For years I have used Dedo lights and anyone who has experience with them knows the frustrations of having to wait 10 minutes or more after turning them off before you can even touch them, because they are so hot.  The Sola ENG lights are rated at 50,000 hours of LED life; more than you will ever need. Running them off a D-tap power supply was easy to do with the optional D-tap extension cable.

The fewer batteries I have to carry the better, so I was very impressed by how little power these lights required. A single IDX Endura V-lock battery runs a single light for many hours. I consistently did 30-45 min interviews and the battery didn’t seem to move below 100%. You can also get multi D-Tap connectors and run multiple lights off the one power supply.

I used these lights in situations where I had no access to mains power as well as for live crosses, lighting rooms and for interviews.  I even used the kit for a 45min long one-on-one interview with the President of Mongolia.  This kit was very good in this situation – I was given only 15 minutes to set up for a sit-down interview in a room I had never seen before, using two cameras and six lights. I would not be able to do fine adjustments as the President would just walk in, sit down and start the interview straight away.  Having lights that were quick to set up and position really helped me out of a tight bind. I used the Litepanels Sola lights to key and backlight the President and to also key the correspondent who was interviewing him. We used hired lights for the rest.

Overall, I love the Sola ENG kit. It is fast and easy to set up and provides nice light in a variety of situations and the LEDs have a very high CRI.  They didn’t color shift when dimmed down; nor did their behavior change under different frame rates. The more I used them, the more I liked them. For news and documentary professionals they are an extremely good prospect.

This kit is not cheap, retailing for about $2,695 US.  But a single Dedolight and dimmer used to cost around $800 and for what you get, I think it is fairly priced.  It would have made a lot more sense to include three 10′ D-tap extension cables in the kit and they should also include – or at least offer as an option – some small D-tap batteries to power the lights remotely.  Something like the Switronix EX-L96. Having a kit that includes everything you need makes a lot more sense to me than having to buy additional extras to make it work.

Apart from those small gripes I really enjoyed using this kit and am looking to buy one soon.  For the sort of work I do I found it an extremely capable kit that had enough power and flexibility to be used in just about any situation.

This kit was on loan to me from Litepanels and has since been returned.  I have no commercial agreement or arrangement with Lite Panels.  My views and opinions are strictly mine and not of any organization or company.