On May 18th, students from Columbia University’s School of Journalism graduated from a year-long intensive program in reporting, writing, and, for some, HDSLR news production. While readers of this site have long been accustomed to the joys and heartaches of using DSLRs to capture video, this was the J-School’s first year of trying to use these cameras as a news-gathering tool. The process of teaching and learning the HDSLR workflow was intense and often frustrating. But, by graduation day, it was obvious that the results were well worth the effort.

Digital Media students at Columbia focus on many things: reporting, writing and online skills as well as photography and videography. As the head of the Digital Media department at Columbia, the idea of teaching my students one device for both stills and video was extremely attractive. And as a videographer who has been shooting HDSLRs for a while now, it was exciting for me to be able to share my real-world experience with these journalists-in-training.

The basic kit that students use at Columbia includes a Canon T2i, a Canon 17-40 F/4L lens, an Olympus LS-10 audio recorder, and a Rode NTG-2 shotgun. Besides the T2i’s, most of this gear was salvaged from previous cameras that had been retired. Students did not have Zoom H4N recorders, Small HD monitors, or any fancy Zacuto gear. Being an academic institution, we were working on the cheap. But, in retrospect, the fact that we had fewer accessories to confuse ourselves was a big bonus. 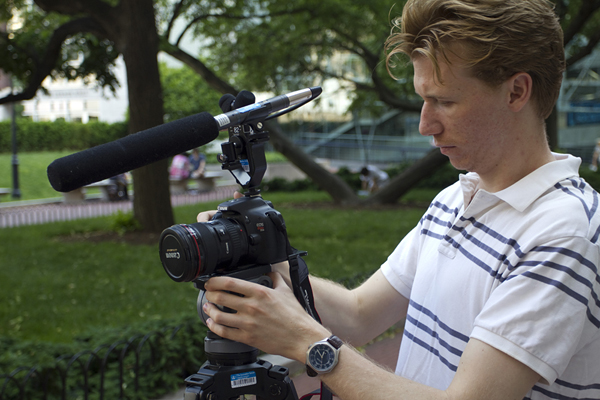 Digital students learn photography prior to learning video, so the transition from stills to video was not a big leap. Concepts such as aperture, shutter speed, and ISOs carried over smoothly from photo. But beyond that, everything else was a challenge.

“It felt like there was a lot to learn for someone who had been a pen and paper journalist for so long,” said Dewi Cooke, 31, a former print reporter who came to Columbia to gain digital skills.

The T2i does not have a manual audio feature so we were forced to record dual audio. Students often forgot to hit record on the audio recorder, and even if they did, Pluraleyes often failed. File management was another trap in the training processes. Properly setting up any FCP project takes some getting used to, but dealing with video files, audio files, sync’d files, and transcoded files tested even our most organized students. Data was lost or misplaced incessantly. It was an exercise in patience, but, like most HDSLR filmmakers, the students eventually figured out the work flow.

“It took us five months to learn how to use HDSLRs,” said Cooke. “But it was worth it. The shallow depth-of-field was visually appealing. And the small size of the cameras made it possible for us to shoot in places we would not normally be able to.”

Next year, we’ll continue to use HDSLRs at the Journalism school. With large sensor video cameras coming out, we may eventually go back to shooting on a more traditional camera. But, with the ability to shoot beautiful images in low light and in tight situations, it’s doubtful that we’ll completely give up on DSLRs any time soon.

Here are two examples of some of the fine work that students were able to do this year.

VIDEO 2: Produced by Dewi Cooke and Chitrangada Choudhury is about two best friends who are building their table tennis dream in Pleasantville, NY. One of them is Will Shortz, crossword editor for the New York Times and the other is Robert Roberts, a Caribbean table tennis champion.

Duy Linh Tu is Assistant Professor and Director of Digital Media at the Graduate School of Journalism, Columbia University.