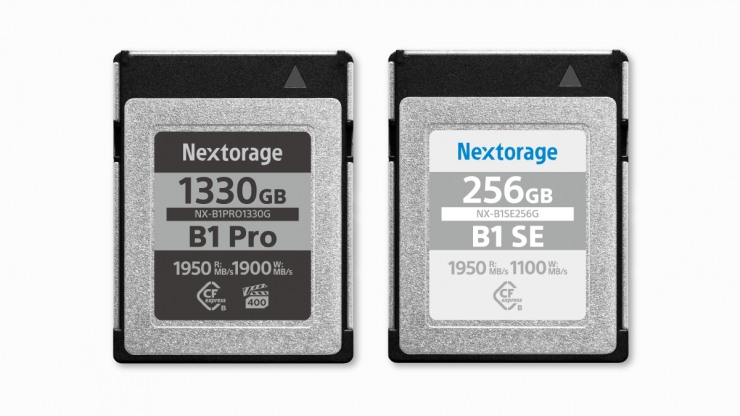 At Interbee 2022 in Japan, Nextorage announced its new CFexpress Type B Memory Cards that they claim are the World’s fastest.

The Nextorage cards are the B1 Pro Series and B1 SE Series. Both cards support the PCIe3.0 NVMe 1.4 interface.

Both the B1 Pro and B1 SE series are durability tested in an environment compliant with CompactFlash Association regulations:

Nextorage is currently testing the compatibility of the B1 Pro/B1 SE Series with CFexpress Type B memory card compatible devices and has confirmed recording operation with the Canon EOS R3, EOS R5, EOS R5C and Nikon Z9. Information on other compatible devices will be updated on the Nextorage website as it becomes available.

The B1 Pro Series are VPG400 rated (guaranteed minimum sustained write speed of 400 MB/s) and they are available in capacities ranging from 165 GB to 1.33 TB. The cards were designed specifically for high-speed continuous shooting of RAW images as well as 8K video recording at higher bit rates without dropping frames with the latest high-performance mirrorless cameras.

The B1 Pro Series CFexpress Type memory B card is equipped with “Dynamic Auto Power Save,” a unique system developed by Nextorage for low-power consumption during video recording. The B1 Pro series is claimed to offer up to 68 % power savings compared to non-equipped pSLC CFexpress cards. This system not only saves the camera’s battery life, but also prevents thermal throttling from triggering by reducing the temperature rise of the card. This interaction contributes to maintaining
sustained write speed during high-speed writing in video recording.

Now, while these speeds may sound impressive on paper, the highest recording bitrate of any camera on the market that utilizes CFexpress Type B cards is around 800MB/s. The read speeds are also going to only be as good as the card reader you are using.

The Nextorage B1 Pro Series/B1 SE Series CFexpress Type B memory cards will be available on amazon from late December 2022. Below is the suggested retail pricing: