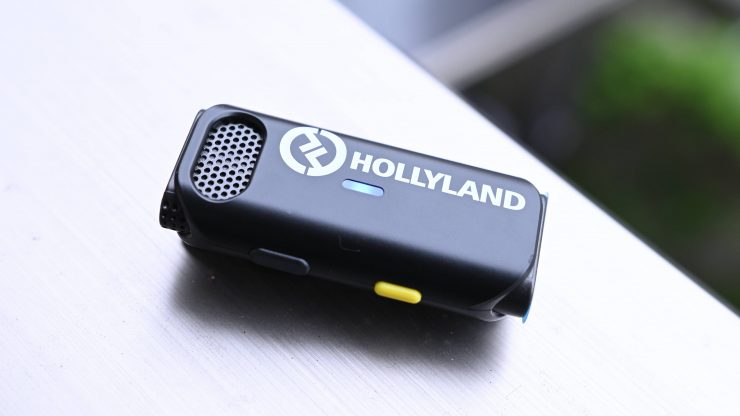 The Hollyland LARK C1 is s wireless microphone system for iOS and Android devices. The system is being targeted at Vloggers, live streamers, YouTubers, and entry-level users who may only be using a phone or action camera.

The Lark C1 comes in its own charging case and it is being billed as a plug & play solution. I am going to be reviewing this device as a professional to see how it works in a professional environment. This may sound a little unfair at times to the Lark C1, but I can only review something based on how I would use that product.

The Lark C1 TX units weigh 11.5g / 0.40z. They are reasonably small and compact and I prefer the design over having larger square RX and TX units.

What is interesting is that you can attach an Android version of the Lark C1 RX unit directly to an action camera like the DJI Action 2/3.

I like this integration with the DJI Action Cameras and it makes for a useful solution if you want to record better audio when using an action camera.

The build quality is pretty decent for both the TX and the RX units. Despite their small size and the fact that they don’t weigh much, their construction is still decent and there wasn’t anything that I came across that overly concerned me.

The iOS version of the Lark C1 RX features an MFi-certified Lightning interface.

The operation of the Lark C1 system has been designed to be as simplistic as possible, but you really do need to use the LarkSound app to see what is going on.

There is nothing on the actual TX units apart from a small colored LED to indicate what is happening. All you get is an On/Off button and the Noise Cancellation button. You can tell when the noise cancellation button has been activated because the LED light turns green instead of blue.

In a nice touch, you can playback audio through your smartphone’s speakers without the need to unplug the RX. The only caveat is that you need to first enable this in the LarkSound app otherwise it won’t work.

Now, Hollyland only recommends that you use this in crowded and noisy environments. They state that for normal recording environments, using a windshield is good enough.

The LarkSound app allows users to access multiple advanced operation options. The app allows you to view the TX battery percentage, adjust the noise cancellation level, perform an upgrade, or control the volume and real-time playback.

Once you have plugged the Lark C1 TX unit into your smartphone and you launch the app you will be greeted by a screen asking for access to use the audio source that is now coming in.

You then will be greeted by the main screen, but until you pull the TX units out of the charging case you won’t be able to see them.

Once you pull a TX unit out of the charging case you will get a quick message that appears saying that the TX has connected. You will also see their battery status.

You can also turn the Noise Cancellation on. You will also see that the volume adjustment is very limited. You can only choose between Low/Medium/High. This doesn’t give you a lot of flexibility, but to be honest, you can just adjust the level in whatever program you are using to record the audio.

The biggest issue with the operation of the system is that you can’t individually record two separate tracks if you are using two TX units at once. They just get mixed together which sort of defeats the purpose of having a two-TX system. You can’t view two separate signals from the TX units, they just appear as one.

One thing you can’t do with the Lark C1 system is to attach a lavalier microphone.

I can’t stress this enough from a professional perspective. Nobody wants to use a wireless microphone that has been designed to be seen when it has a big logo and LED lights on it. This is not a dig at Hollyland, because all of the companies making similar products do exactly the same thing.

Now, I have a suggestion for this. Manufacturers should make a little sleeve that users can put over the top of the microphone casing that hides the logo and the LED light. Microphones are designed to be heard and not seen.

The included windshields work well, but they are aesthetically not something you want to have seen in a shot.

Look, I get it. For people doing Vlogs or streaming it probably doesn’t matter if there is a bright light or a logo on their microphone, but for most other use cases, it does.

It utilizes advanced frequency hopping technology so that the Lark C1 can automatically switch to a clear channel.

I did a range test to see what sort of distance I could get out of the system. I found that as long as I had line of site I could easily get 250-280m. This was far greater than the advertised operating range, however, with systems such as these it really depends on the environment you are operating in as to what sort of range you will get.

As I mentioned earlier, the Lark C1 comes in its own charging case. This is a nice touch, although it does mean that it takes up more space. Personally, I prefer having the charging case, because it is convenient and it is also a good place to store and transport them in.

Both the TX and RX are usable while charging. The RX can be connected to a power source to charge your phone during operation.

The Lark C1 TX units feature an Omnidirectional microphone with a frequency range of 20Hz–20kHz.

The audio quality of the system is ok, and probably what you would expect from a budget-priced wireless audio system with an in-built mic. The microphone can sound a bit thin, especially if it isn’t reasonably close to where your subject is speaking.

Above you can hear a sample of the audio recorded in a regular room. I am wearing the Lark C1 and it is about 15cm from my mouth.

If you are using the Noise Cancellation set to Strong then the audio quality certainly takes a big hit.

Above you can hear what it sounds like. Now, you wouldn’t actually use the Noise cancellation in normal conditions like this, but I just wanted to give you a comparison of how it sounds when it is turned on and off.

The Lark C1 is basically plug & play as advertised. It is quick and easy to set up, but it does have very limited controls and there is no ability to record two separate tracks if you are using two TX units at once. It also lacks any form of monitoring if you want to listen to what is being recorded. Listening to a recording through the speakers after you have stopped recording is handy, but it is too late if you notice any issues.

You can literally just use any of the smartphone apps that allow for audio recording. If you just use the normal video recording function on your iPhone, then the audio from the Lark C1 automatically gets used.

Apps such as Filmic Pro, as well as other competitors’ audio recording apps also allow you to choose the Lark C1 as the audio source.

What you could do with the Lark C1 is to use it as an extra recording device to pick up ambient audio on location by using it in conjunction with a Tentacle Sync E mkII and the Tentacle Sync Recorder.

What this enables me to do is to capture audio externally with matching timecodes for my other cameras and audio devices.

Yes, I could just use a Tentacle Sync Track E to do the exact same thing, but it is handy if you need another audio source, or as a backup option.

It is also handy in situations where you are recording content that is going to be passed off to someone else because you can clip a TX on yourself and then record audio describing what you are shooting or what your camera settings, etc. were. That way you have a timecode-matched audio file that isn’t embedded into your footage that an editor can also use.

Look, I know the Lark C1 isn’t a product that is likely to appear to a lot of professionals, but it is a good option to have sitting in your kit for emergencies.

Here are the prices for the various Hollyland Lark C1 options:

Competition comes in the form of devices such as the Comica Audio BoomX-D MI1 Ultracompact Digital Wireless Microphone System for iOS Smartphones (2.4 GHz) which is $139 USD for the kit with one TX and two TX units for $179 USD.