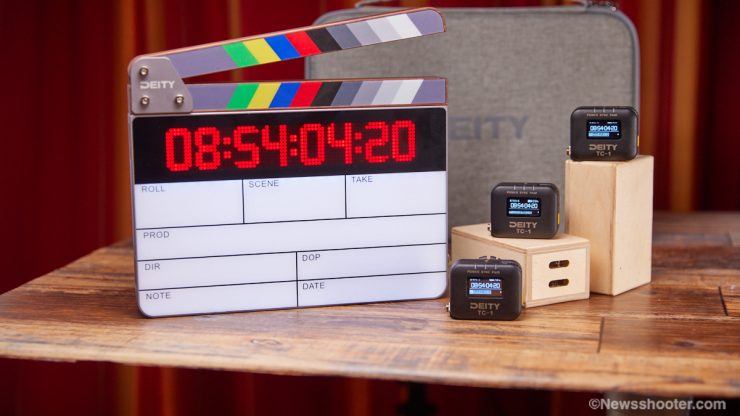 With the release of the Deity TC-1 timecode box earlier this year, Deity now has the companion product TC-SL1 Bluetooth Smart Slate ready to go. I first saw the TC-SL1 at NAB 2022. One key feature the Deity TC-SL1 Smart Slate has is its Bluetooth connectivity making syncing a breeze when using the Sidus Audio app or one of the TC-1 units as a master unit.

Electronic slates are expensive. The two popular options are the Denecke TS-3, that retails for $1672, and the Ambient Recording Lockit Slate Take 2 sells for $2010. The Deity TC-SL1 Smart Slate retails for $999.

The Deity TC-SL1 Smart Slate comes with everything you need to start your TC slating journey.

The Deity TC-1 Smart Slate pairs perfectly with the TC-SL1 Smart Slate. Below is an excellent video by Andrew explaining how to set up and use the TC-1.

The build is excellent. The slate is one aluminum piece milled on a robotic CNC machine. It features smooth beveled edges, so it won’t scrape surfaces when laid down.

The clapper is made of durable Black Walnut wood sourced from a certified sustainable farm in Tennessee. Black Walnut is a very durable hardwood. It has excellent shock resistance and resists warping from heat and humidity. The slate is built to last.

The front of the slate has a matte finish to prevent glare which makes it tough for cameras to get a clean shot of the slate.

The TC-SL1 Smart Slate isn’t light especially compared to a simply slate. It is designed to be used one-handed. The slate comes in at 2.5 lb., which is in the same ballpark as other TC slates. On the back is a nice wide 4″ opening that fits four fingers perfectly, and the clapper has a 2″ notch that my thumb slides right in. I can easily operate the slate with one hand.

The slate uses NP-style batteries and includes two 3350mAh 7.4V 12.79Wh FB-NP-F550-DT. These batteries have 30% more capacity than the original versions. With a much better battery solution, the TC-SL1 Smart Slate will last several days. Just don’t leave the clapper open, and it will keep on going. Deity states it will run for over 25 hours if the clapper is left open.

The battery inserts into the bottom of the slate and is hot-swappable, so you never lose power, and the settings remain. The battery locks in place, then close the locking battery compartment door. The slate will use a single battery at a time, then moves to the second battery once depleted.

A green light will let you know it’s getting power. A red light will illuminate if the battery is dead or not installed correctly. To remove the NP battery, push it in, and it pops out.

The slate doesn’t come with a charger, but you can charge the batteries with a USB-C cable and a 5V power adapter. It takes approximately three hours to charge using a more powerful 15V 2A charger.
The TC-SL1 is compatible with USB-C PD3.0, QC2.0, FCP, and AFC quick charging protocols. For a fast charge, use a 15V 2A charger.
When charging, the TC-SL1 can remain powered up and will retain its current settings and sync.

To remind the user the TC-SL1 is powered up, in the bottom right corner of the timecode window are 6-blinking lights. I like that it blinks as it gets your attention; however, some people might find it distracting on set.

The TC-SL1 slate is illuminated and has separate brightness controls for both the timecode and the slate. By default, it is set to 3 for both, and you can adjust them separately to the maximum brightness of 6. The slate illumination can be set to 0 for no backlight.

Above is the Brightness Control in the main menu. UP is the timecode display, and DOWN is the brightness setting for the slate portion.

The slate can also be set to flip the timecode display with a button on the side.

You can jam or sync the timecode to and from the TC-SL1. On the side of the slate are two inputs. One 5-pin LEMO and a 1/4″ TRS. This is great if you are using other timecode generators in the production. Simply send or feed the TC, and you’re good to go. The TC-SL1 holds the timecode well, with a drift rate of only 1 Frame in 48 hours.

One key feature I mentioned earlier is Bluetooth connectivity. When using the Deity TC-1 Wireless Timecode Generator Box with the TC-SL1, you can use one of the devices as a master and jam-sync all of them simultaneously via Bluetooth 5.0 connectivity with a maximum range of 250FT. This is a great time-saving feature, as you don’t have to hook up the TC boxes and jam them individually. It works very well.

If you want to use “time of day” for timecode, then the app is the only way to do this. You can set a custom time without using the app. The app is handy as you can control several TC-1 and slates from one central hub. You can update the firmware on the devices and change their names. The name of the TC-SL1 can also be changed from the slate’s main menu.

Once the clapper is executed, there is extra info that will appear. By default, the frame rate pops on for 0.2 seconds. These parameters are customizable in the Sidus Audio app. The duration can be displayed from 0.2 to 5 seconds.
You can also have User Bit, three custom text options, and Input Pattern options. Some of the presets are amusing. The time the text displays is customizable. You can also have the timecode displayed at all times. After the clap, the slate backlight turns off, and the TC continues to display.

As I mentioned earlier, the brightness of both the TC display and slate info is adjustable, but it’s unavailable from the Sidus Audio App. To change these parameters, you use the menu on the slate. It would have been great to be able to make those changes on the app as well.

The Deity TC-SL1 Smart Slate is the least expensive timecode slate on the market at $999, it also is a well-made product that will last many years on set. It integrates with the Deity TC-1 Wireless Timecode Generator Box and can be jammed with other products. This gives you more options.
A timecode slate is somewhat of a niche product. Slating with timecode is great if you record your audio separately and have a couple of cameras in the mix. Your editor will love you as well as anyone in the post-production pipeline.

It’s worth mentioning that Deity also has a wireless system with transmitters that record audio and can be used as a TC box. The Deity BP-TRX is a very good solution for recording separate audio with timecode that is attached to talent, plus you can record the audio in camera since it’s a wireless system. So many good options.

Also, with the Smart Slate, you can use pretty much any timecode-jamming device since it can send and receive with two different inputs. The only downside is you don’t have Bluetooth connectivity to sync with one tap of the master unit.

The Deity TC-SL1 Smart Slate retails for $999 and is available today.