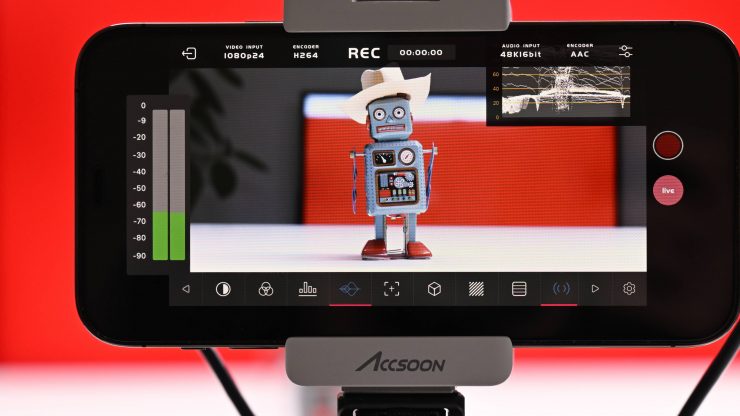 The Accsoon SeeMo HDMI to USB Monitoring Adapter is a nice little device that allows you to use your iPhone or iPad as a monitor.

This is not the first time we have seen devices that allow you to use a smartphone or tablet as an on-camera monitor. The Z CAM IPMAN Gemini and even Accsoon’s own M1 HDMI to USB-C On-Camera Video Monitor Adapter Cable for Android Smartphones have been able to do this previously, but only when using Android phones. To my knowledge, this is he first affordable device that lets you do it with an iPhone.

The whole concept was pretty simple. Make a lightweight adapter that can convert an HDMI signal so it can be viewed on an Apple iPhone or iPad.

If you are going to make a product that is going to be primarily used with small-sized mirrorless hybrids then it can’t be too big or too heavy otherwise no one will want to use it.

The Accsoon SeeMo is mostly made out of lightweight materials and it tips the scales at just 75g / 2.65oz. What you clearly need to remember is that you need to power the Accsoon SeeMo and a Sony NP-F style battery is going to weigh a lot more than the adapter.

While the Accsoon SeeMo, a Sony 37Wh NP-F battery, and an iPhone 12 Pro tip the scales at around 500g / 17.64oz that is still going to be slightly lighter than even the cheapest 5″ monitor with the same battery.

With a battery, the depth of the Accsoon SeeMo is reasonably substantial and it will end up being fairly similar to if you were using something like an Atomos Ninja V.

The build quality is ok, and even though Accsoon has tried to keep the weight to a minimum by using a lot of lightweight materials, it still feels solid enough.

The spring-loaded mechanism that holds your phone in place is reasonably robust. The adapter is adjustable from 65mm to 90mm, which allows it to accommodate iPhone with a 5.5-6.7” screen.

The battery release mechanism is plastic and I can’t speak for how robust it would be without having used the product for many months.

How do you power it?

The Accsoon SeeMo features an in-built Sony-style NP-F battery plate. This is the only way you can power the adapter.

I would have preferred to have seen an in-built battery and/or a USB-C power input added as well. With a small-sized, lightweight adapter it doesn’t make a ton of sense for users to have to power it via a battery that weighs substantially more than the device itself.

The SeeMo only draws 2W or a maximum of 4-5W if you are using it with an iPad.

An in-built battery also has its caveats, but I think a product like this should have one. Having the ability to power it via a battery or through an internal battery or external USB-C source would make it a lot more versatile, at least in my opinion.

The other issue is that it doesn’t charge your iPhone when it is connected up, however, if you use the included USB-C to USB-C cable and plug it into the 5V output you can use it to charge certain mirrorless hybrid cameras.

The SeeMo comes with a cold shoe adapter and it also features a 1/4-20″ thread in the base that provides you with alternative mounting options.

If you want to use it with an iPad you do need to purchase a yet-to-be-announced version of Accsoons iPad cage.

What signals can it accept?

The Accsoon SeeMo is very easy to get up and running. The first thing you need to do is to download the free Accsoon See app from the App store.

You then put your iPhone into the cradle, connect the lighting to USB-C cable from your phone to the SeeMo, and then connect an HDMI cable from your camera to the adapter.

You then turn your camera on, turn the SeeMo on and open the app that you downloaded.

Then all you need to do is to press the Monitor icon on the screen and you are good to go.

There is also a page where you can change settings, update firmware and find links to tutorials and the operating manual.

Once you are connected up you will see a real-time image from your camera displayed on your iPhone.

Not only can you see an image from your camera, but you can also access a vast array of monitoring assist tools.

These are reasonably well laid out and easy to access.

The other small gotcha that can catch you out is that you can do a pinch to zoom on the screen, but it doesn’t give you any indication that you are zoomed in. If you forget to zoom back out you may well end up shooting incorrectly framed images. This is something you need to be very mindful of.

Some of the monitoring tools that are available include false color, histogram, peaking, audio meters, waveform, frame guides, etc.

What is nice is that you can adjust the color and intensity of peaking, the position and opacity of the waveform, etc.

You can also bring up a screen where you can add or delete various monitoring tools. This is handy as you can only have the tools displayed that you want to use.

There is also the ability to use LUTs.

The Accsoon SeeMo lets you record video and audio directly to your phone. This is good if you want to upload material quickly to social media platforms, or even have a look back at takes. You could also use it as a second back up recording.

You can change the encoding bitrate to suit your needs.

30Mbps is reasonably decent for an HD recording through an app on a phone. I found that the quality of the recordings was more than good enough for social media use.

It is also good that if you are on location and you need client approval for a certain shot, etc. you can record a clip and then send it to them via iMessage or similar.

The Accsoon SeeMo has the ability to live stream. This is pretty straightforward and easy to do and you can stream to a wide array of different platforms. For anyone working in news or events, this is a handy feature to have, especially in emergency situations.

The Apple iPhones have really good, color-accurate displays that put a lot of affordable on-camera monitors to shame, so using one as an onboard monitor certainly makes a lot of sense.

The only real caveat is that you can burn through a battery very quickly on an iPhone when you are using it as a monitor and if you are streaming as well. This is just something you need to keep in mind.

Some of the newer iPhones have very bright screens that you can easily see in sunny conditions. Almost everybody already owns a phone, so being able to use it as a monitor also makes sense. If you have an older iPhone you can turn it into a monitor instead of throwing it out, so that you aren’t tying up your primary phone.

The dealy over HDMI will entirely depend on what camera you are using. Some cameras have far better HDMI delay than others.

The Accsoon SeeMo retails for $179 USD. Below are links to where you can buy it:

The Accsoon SeeMo is a clever little device that packs a lot of features and it allows you to use an iPhone as an on-board monitor. The app is easy to use and it has a wide array of monitoring tools. I like that you can live stream and also record pretty decent material directly to your phone.

As I previously mentioned I would have preferred to have seen some sort of internal battery and the ability to power it through USB-C.

Using an iPhone as a monitor certainly makes a lot of sense, especially given how good the displays are on the latest versions.