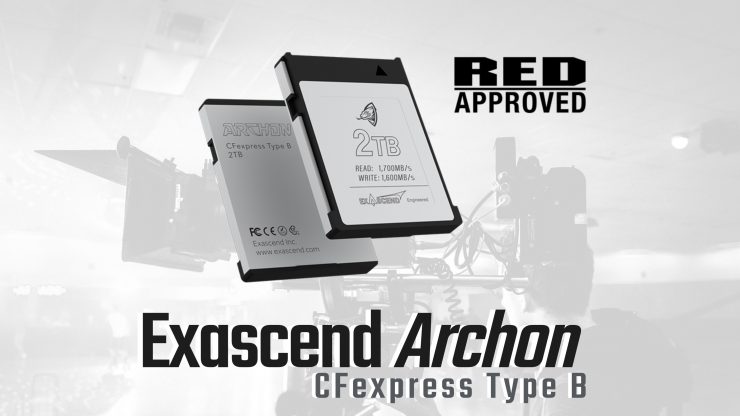 Exascend has announced its new Archon 2TB CFexpress Type B Memory Card for the RED V-RAPTOR.

I reviewed the 1TB version of this card earlier in the year and you can read that review here. The 1TB version is an extremely impressive card with the best-sustained write speeds I have ever seen from a CFexpres Type B card.

The Exascend Archon 2TB CFexpress Type B Memory Card is a high-capacity, high-performance media solution that has been certified and approved by RED. Although it is primarily targeted at users of the RED V-RAPTOR, it would also be a good card for use with cameras such as the Canon R5, Canon R3, Canon C500 Mark II, Canon C300 Mark III, Nikon Z9, and the DJI Ronin 4D.

CFexpress cards have only been around for a few years and higher capacity versions can be expensive. With more and more cameras starting to come out that are recording to CFexpress Type B, hopefully, prices will eventually start to come down. What you clearly need to know with most types of media is that they aren’t all created equal. Different cards have varying degrees of performance and often card manufacturers won’t quote minimum sustained speeds, instead, they quote maximum possible read and write speeds.

With the design of the PCIe Gen3 interface, the fastest cards can provide speeds of up to around 1700 MB/s read and 1700 MB/s write, which is over 3 times faster than the best CFast 2.0 and XQD cards.

It is claimed to be capable of recording 8K 120p.

The Archon 2TB CFexpress Type B Memory Card is now available to pre-order for $2,399.99 USD.

The Exascend Archon 2TB card is the most expensive card on the market, however, it is currently the only certified 2TB option available for the RED V-RAPOR apart from RED’s own option. The Exascend Archon card comes with a 5-year warranty and they also offer a data recovery service.