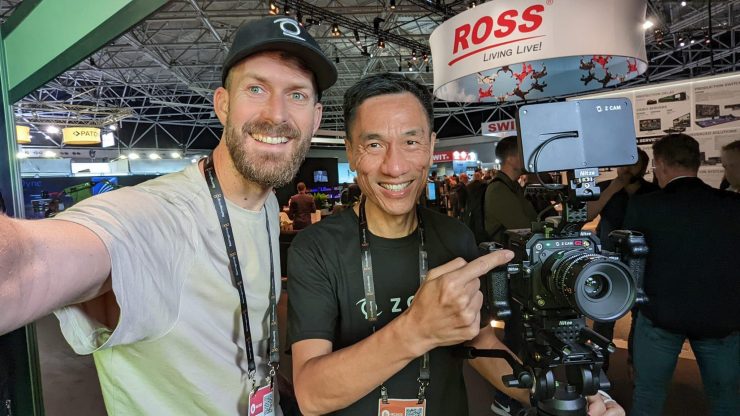 The camera is a version two or Pro model of the current full frame E2-F6. All resolutions and FPS are the same as F6 and the same sensor. The ISP (Image Signal Processor) is also improved over the original F6.

I don’t have all the specifications, so I’ll do my best to explain the new features. I’m assuming the sensor and the internals of the camera are the same as the F6 but with updated usability and IO.

A few nice features are the F6 Pro has both HDMI and 12G SDI. Genlock plus Timecode. No XLR audio inputs. The F6 uses the ARRI Mini style 5-pin Lemo input just like the F6 has.

As for what type of media the camera uses? It will use CFast 2.0 Memory Card and a new custom SSD that is still in the works. It appears to have an updated door on the side that replaced a rubber cover.

An included 1000 nit proprietary detachable touchscreen monitor is a good upgrade, as the Z Cam is basically a brain. The monitor interfaces with the camera via a port on the top. It will not work with other cameras. This is a huge upgrade as the F6 has a very small LCD screen on top of the camera, and navigating the menu is a bit cumbersome. With a touchscreen this will make it so much more user-friendly.

For power, it now uses a V-Lock battery as opposed to a Sony L type.

The mount is user swappable and is available in PL and EF. The EF mount is available with an ND filter built into the mount. This feature works great on the F6.

I like the upgrades, and the price is very competitive for a full-frame 6K camera with a 5″ touchscreen monitor. I reviewed the E2 F6 and felt the camera is very capable with a nice image. The improvements just make it even better. More to come as Z Cam rolls out more info.