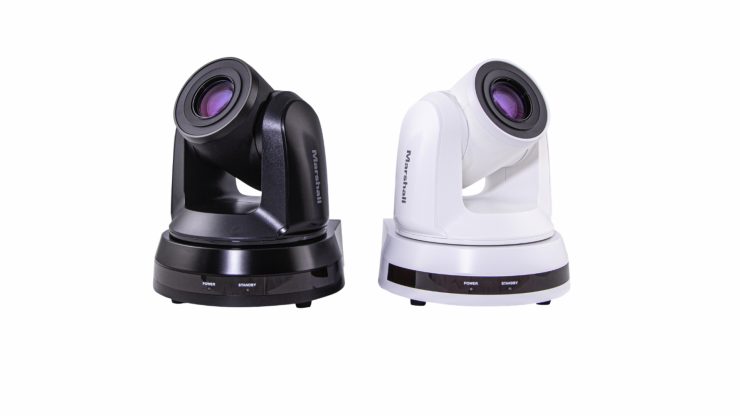 Marshall has announced that its new CV620-TBI PTZ cameras will be able to automatically track and follow subjects by using an intelligent auto-tracking AI feature.

The CV620-TBI uses new facial recognition technology and intelligently learns the motion dynamics of the subject and anticipates the movement. This removes much of the guesswork for camera intelligence reducing late or inaccurate maneuvers that require corrective adjustment.

The CV620-TBI (black) and CV620-TWI (white) PTZ cameras are built around a Sony sensor and they feature a 20x optical zoom with a range of 5-110mm starting at roughly 60° angle-of-view. These new PTZ cameras feature simultaneous HD outputs of 3GSDI, HDMI and IP ethernet connectivity with up to 1920x1080p resolution at 60fps. Also boasting a flexible 340° horizontal range of movement and 120° vertical tilt, the CV620-TBI provides a large reachable viewing area for the new auto-tracking feature.

Track and follow technology is not new to the PTZ camera market. Early versions required a secondary fixed camera usually installed into the base of the camera to scan the environment and required a lanyard to be worn by the speaker. Viewers watching early auto-tracking cameras had to deal with viewer motion sickness and fatigue. As auto-tracking features have been refined over the years, these elements have been removed and much smoother maneuvers with greater accuracy have been implemented.

The new CV620-TBI track and follow cameras are equipped for local AV production workflows with 3GSDI and HDMI outputs, as well as a remote AV over IP camera source. Ethernet (IP) connectivity offers ease-of-setup and operation with one cable for PoE+, video, audio, tally and control.

Marshall cameras are compatible and controllable from common soft codecs such as OBS project, vMix and other software production tools. Control can be sent from the included IR remote or a Marshall VS-PTC-IP broadcast-style controller, VS-PTC-200 entry level controller, Video Management Software (VMS), software GUI from a web browser, as well as third party control decks, such as Skaarhoj and others.

Marshall also collaborates with companies like Netgear to enhance ease of configuration with managed switches specifically engineered for AV over IP. Marshall cameras are selectable within the Netgear M4250 and M4300-series switches to allow for quick setup and configuration.