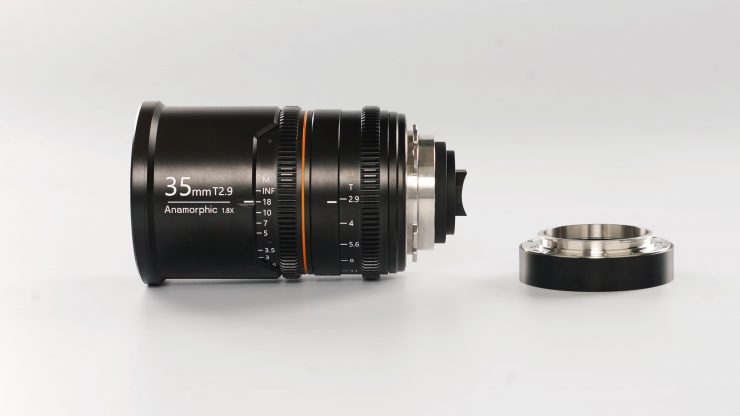 I did, however, find that when I was testing the 50mm I did see some slight vignetting when shooting open gate on certain cameras, but if you are cropping to get a 2.39:1 aspect ratio then you won’t see any of that vignetting.

The new lens will be available in EF/PL/E/L /RF/MFT mounts and the company claims that it has a constant squeeze ratio. One of the complaints some users had with the 50mm was that the squeeze factor did vary from around 1.68x to 1.8x depending on the focusing distance. This is not uncommon among anamorphic lenses for them to behave in his way. If you are shooting someone’s face, then depending on the individual, it did have the potential to look slightly distorted. This could, of course, be easily corrected by changing the squeeze factor slightly in post.

In a lot of ways, particularly for a lens at this price, the decision to go with a 1.8x anamorphic makes a lot more sense than going with a 2x. 1.8x is more versatile and it allows the lens to be used on more cameras. I also suspect that it is also more affordable and easier to make a 1.8x anamorphic lens than a 2x.

The optical design of the lens consists of 18 elements in 14 groups and there are 11 aperture blades.

The lens is not compatible with the focal reducer, speedbooster, or adapter that has a built-in filter and glass elements.

Great Joy is also going to release an 85mm down the track so you don’t have to worry about buying a lens and then worrying if any more focal lengths will appear. I would imagine that if these lenses prove to be popular then there may well be other focal lengths available in the future to further expand the set.

I think it would be fair to say that Great Joy is probably trying to attract owner/operators of mid-tier and lower-cost digital cinema cameras and mirrorless hybrids that are capable of shooting in open-gate anamorphic modes. They could also very well find themselves on more expensive cameras as well.

There is no current indication of pricing, but I would expect it to be very similar to the price of the 50mm T2.9.