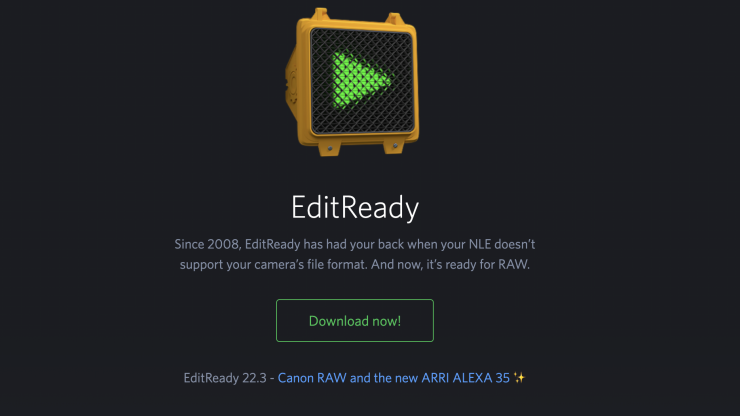 EditReady 22.3.2 has been released. It includes updated BRAW support, improvements for CanonRAW on intel processors, and a bunch of bug fixes.

EditReady 22.3.2 can be downloaded here. It is a free update if you extended or bought your license less than a year ago. If not, you will need to buy a full version of EditReady or download a trial version.

Canon RAW (Canon Cinema RAW Light) reduces the uncompressed RAW files by 60% – 80% without significantly degrading the quality of the images.

EditReady now lets you convert Canon RAW to a format of your choice.

The new ARRI ALEXA 35 requires different processing even when dealing with material captured in ARRIRAW. As the ALEXA 35 uses LogC4 and ARRI ARRI Wide Gamut 4 you can’t just use existing ARRIRAW workflows.

EditReady now supports ARRI’s new LogC4 and ARRI Wide Gamut 4 so you can deal with ARRIRAW footage captured on the ALEXA 35 and convert the files into an edit-friendly file format.