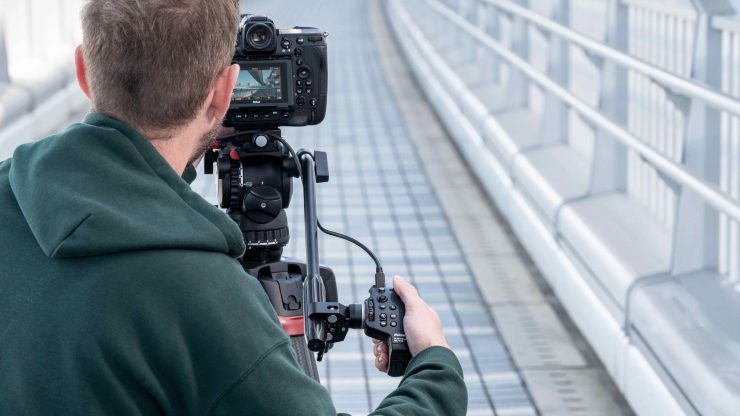 Along with the upcoming Z9 firmware update, Nikon has also announced that they are developing the MC-N10 Remote Grip.

The MC-N10 Remote Grip is an accessory that allows remote control of Nikon Z-mount mirrorless cameras via a wired connection and it is primarily being made for video shooters.

Nikon hasn’t said what the MC-N10 Remote Grip will actually be capable of, but if you look at the above image you can see that it connects to the camera via a USB-C cable, and it features some of the buttons and controls that you would find on Z Mount cameras. There is also a rosette attachment so you could mount the MC-N10 onto a camera cage. In the above photo, you can see that it is being attached to a tripod pan handle.

On the front, you can see a record button, ISO button, a power on/off switch, and two function buttons.

This looks to be an interesting product, but it is probably more suited to being used when you are shooting from a tripod. Having it mounted on the camera probably makes little sense as the controls are already there to begin with. Yes, you could use it with a shoulder mount, but using a mirrorless hybrid on the shoulder requires creating a giant frankerig.

Nikon states that the MC-N10 will also support still shooting. Further details, including pricing and availability, will come at a later date.