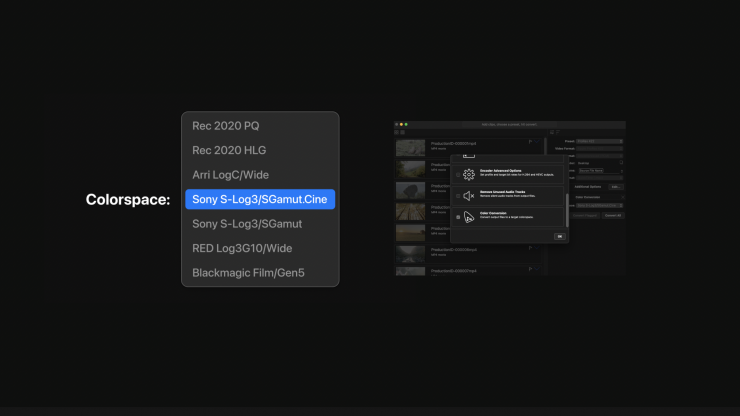 New versions of Hedge and EditReady have been released. Hedge now integrates with iconik, and EditReady features a new color pipeline as well as Sony RAW and X-OCN support.

In Hedge, you can now automatically add metadata to all your iconik assets. You can also generate sidecars containing all your custom elements, which will be processed automatically by iconik’s Storage Gateway app.

EditReady now offers full Sony support and it will work with both Sony RAW and X-OCN files.

Sony’s X-OCN codec is a compressed RAW format. EditReady can now take both the original Sony RAW and the much newer X-OCN codecs and converts them into more manageable files. X-OCN saves between 30% and 60% compared to the original RAW media.

EditReady also receives new Color Awareness technology that allows you to shoot in all flavors of RAW without having any headaches in post. The new Color Conversion panel lets you pick a destination colorspace and LUT, and then EditReady does the conversion for you.

The new color conversions options (available through the color conversion panel) let you quickly choose between Rec709 (SDR) and PQ or HLG (HDR). EditReady converts any RAW format into these video standards automatically, without you having to worry about camera gamma or gamut settings. You don’t need to find the correct output LUTs for each camera make and model, because EditReady will automatically do that for you.

A LUT will only be valid as long as the video remains in the same color space. When the video is converted, any previously-applied LUT won’t be correct. The way to avoid this is to let EditReady convert the original LUT-free video and apply the appropriate LUT after the conversion. For example, if you choose ARRI LogC/Wide Gamut as your output format and then select the ARRI LUT, you will get the correct result.

EditReady will convert any RAW footage from ARRI, Sony, RED, or Blackmagic, into your chosen colorspace before applying the LUT.

If you don’t specify an output colorspace or apply a LUT EditReady will continue to read the RAW file’s metadata and apply any embedded LUTs and color transforms specified on-set.

More and more people are starting to use MagStor for their LTO needs, so Hedge has teamed up with MagStor to bring you full driver detection and support for their devices. All new MagStor purchases now come with a Canister license included. You can also get a MagStor unit through Hedge where you will receive a $500 USD Hedge Fund credit on top of that.

There will also be a Windows version of Canister available very soon.