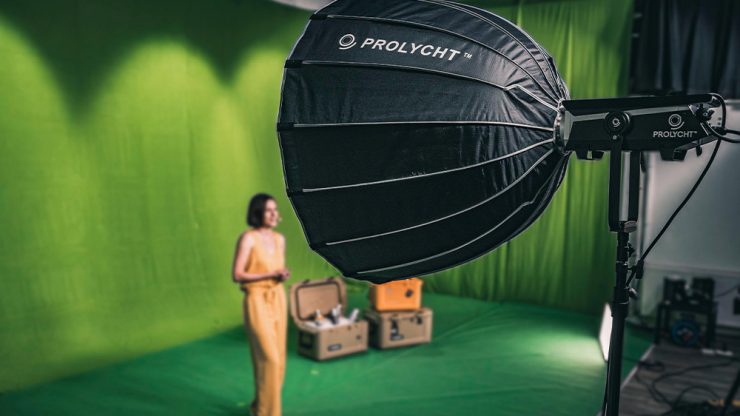 Today, Prolycht introduces new Orion 300 FS color LED spotlight features with a free firmware update.
Prolycht listened to feedback from users and worked directly with gaffers and DPs. As a result, several improvements were implemented, the most significant being a new X/Y coordinates mode that gives additional creative control while remaining intuitive. It allows precision color settings to be matched across several Orion 300 FS units and other lights accessed through a new submenu on the ballast via Prolycht’s free ChromaLink app or the updated DMX protocol.

Prolycht recently added advanced controls to the light’s existing ability to sample and playback the changing color of a scene recorded by the user’s phone or tablet running the ChromaLink app.

The function is beneficial on a virtual set when trying to recreate the changing lighting of a scene. The user can point the camera at a green object for 10 seconds, then a red object for 5 seconds to record it. When they play the file back, the Orion will replicate the colors for the same periods of time. Nifty!

As a result of user feedback, the maximum record time of this feature has been extended from two minutes to ten. Real-time controls have also been added to make changes AFTER the files are created. In playback, there’s a slider for Brightness, one for “Degree of Filter” (similar to different strengths of gel being applied to a light), and then a color wheel for the actual color, plus Hue and Saturation inputs again. All of which can be adjusted in real-time during playback to match whatever interactive lighting the operator may want.

To celebrate these improvements, Prolycht is offering an April promotion in the US and Canada. With the purchase of an Orion 300 FS (PL20001 and PL20001AB), a free Orion 36″ Soft Dome (PL20003) is included. This offer is valid throughout the month of April for all purchased through authorized US dealers.

Go to the download page under the Service tab at www.prolycht.com and download the update. Easy as pie!