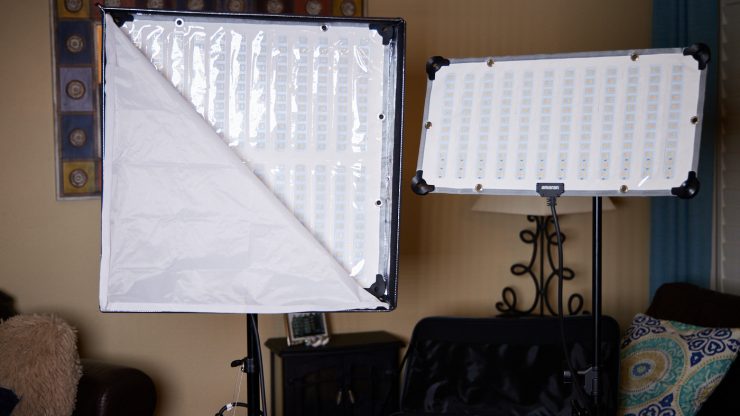 Flexible LED panels have some solid advantages as well as drawbacks. Since they are flat and have no bulk, they can be mounted directly to a surface like a wall or ceiling. In tight spaces, they can be very handy. The downside is they need to be put together to be used as a basic fixture. I always say use the right tool for the job, and flexible lights offer some advantages if you need them.

I have to admit I was a bit surprised amaran decided to introduce a new line of flexible LED panels. They were extremely popular five years ago, but I don’t see them as often now, Not to say they aren’t helpful. LiteGear is the market leader when it comes to panel lights, and they are used on a lot of sets today.

As I mentioned earlier, setting up flexible LED panels is a little more work than traditional lights. They come in a few pieces, and to be used as a conventional light, you use the included frame with light stand receiver. I like the design of the frame as it’s sturdy and doesn’t use hook and loop fabric to attach to the frame.

The X-Type Frame ends inserts into reinforced corners of the panel and pulls it out a little. It holds sturdy and won’t slip off easily, making it a good option for overhead use. Some of the Velcro-style frames tend to sag a little and are much more prone to falling off the frame over time.

The light stand receiver is not my favorite. It’s on the light side and doesn’t lock down tight easily. You have to crank it down. I would upgrade this with a more robust light stand adapter or go with a grip head. The angled pin is also a bit odd as the end of the pin is a 3/8 16″ adapter.

I like the included straight baby pin. It fits in a sturdy grip head so much better than the included adapter. I do understand the amaran line is for the budget-minded user.

The cable is attached to the panel with a reinforced hard plastic bracket on both sides. This build is good and shouldn’t break easily; however, the F22c preproduction model started having some issues, and a row of LEDs changed colors when the connection was wiggled a bit. The other models didn’t have problems, so I’ll chalk it up to being a pre-production model. I will say the cable is thick and well-designed with locking connectors.

The controller is equipped with either a V-Mount or Gold Mount plate and has the Aputure QR plate on the side. However, the clamp to mount it isn’t included in the kit.

The Aputure Lightening Clamp retails for $69 USD. I think it’s worth having as I do not like hanging controllers on the stand, especially with a battery attached. It gets bumped a lot and is a bit sloppy to use.

The lights come with a cord that lets you hang the controller on a light stand’s lockdown knob.

The control box is outfitted with a multi-voltage battery plate. You can use a 14.4V battery to achieve half power or max out the intensity with full power when using compatible 26V or 28.8V batteries. You can also achieve full output when using the AC power supply.

A new feature that will be popping up on fixtures in the amaran product line is DMX control with a special USB-C to 5-Pin DMX512 In & Out Adapter Cable, allowing professional-level control to the flexible light product line. This USB-C DMX input is also included with the new amaran Tube Lights that were also announced.

The F22x and F22c have a fan to keep them cool. I found the F22x is a touch louder than the F22c. It’s a bit odd the two controllers have different fan noises. I wish the tone was deeper; however, it’s a little bit on the higher end, and that is a little concerning if the light is close to sensitive microphones. Overall the fans are too loud for my liking, and I would have to move them away as far as possible from the microphones. It’s something to be aware of. The F21 fixtures have a passive cooling system, so no fan is used inside the controller.

The 200 watts F22 model is basically two 100W F21 panels combined. Therefore you can expect half the output with the F21 model.

The light has pretty good extended CRI scores, like most LED lights these days. The Kelvin color temperature accuracy is reasonably good and the light doesn’t have any big noticeable shifts towards magenta or green.

So now that we have seen the color rendering scores and the Kelvin color temperature accuracy, let’s have a look at the output.

Overall, the F22x is slightly brighter than the F22c, but not by much. The output is fairly consistent over the entire Kelvin color temperature range, although it is interesting to see that both lights had the most amount of output when used at 7500K.

If you need RGBWW in a fixture, the F22c is a better option; for a few more bucks, you get two fixtures types with minimal sacrifice in output.

To get an idea of the output when in HSI color mode, I took readings in the primary six colors from 1-meter / 3.3′.

As you can see, the output when using various different saturated colors varies quite dramatically.

The kits include a 4″ shallow softbox that attaches with a hook and loop fastener. It fits nicely on the panel and comes with two diffusion fabrics: a 1/2 stop grid cloth and a milky 2.5 stop magic cloth type. I love the heavier diffusion. Since the box isn’t very deep, it softens it up more, and the fixtures have plenty of output so it can handle a stronger fabric in front.

When it comes to soft light, you want to get the diffusion farther away from the light. 4″ is not a lot. It’s nice to have a softbox included, and I appreciate the simplicity. However, I would punch it through a 4×4 or 6×6 frame to get a more pleasing look. Again. These are tools, and you have an included option that will work well in many situations.

Bare LEDs tend to cast multiple shadows. I highly recommend using the included modifier with at least the 1/2 Grid Cloth to smooth it out. Bouncing is also an option.

The amaran flexible lights are well built with plenty of output for their wattage. I’m a bit surprised by the release since these styles of lights have somewhat cooled off over the years. Clearly, amaran feels there is interest in them as Aputure does listen to its customers and does a good job creating products they want. With that, the F22 fixtures are brighter than other 200W 2’x2′ models, so I see these as an advancement of the flexible panels at a lower price.

The fixture’s design and frame are well designed, I like that it doesn’t use a hook and loop for attaching to a frame. The eyelets can come in handy for mounting to a custom frame or nails to a surface. I do wish it included the controller mounting clamp as I like the feature with other Aputure lights that have controllers. I’m sure it comes down to keeping the cost lower.

I’m looking forward to seeing the lantern they will be releasing for the flexible light, as that would increase its usability. Always a good thing.

The F21 and F22 series Flexible LED Light panels are available today for pre-order. Pricing below: