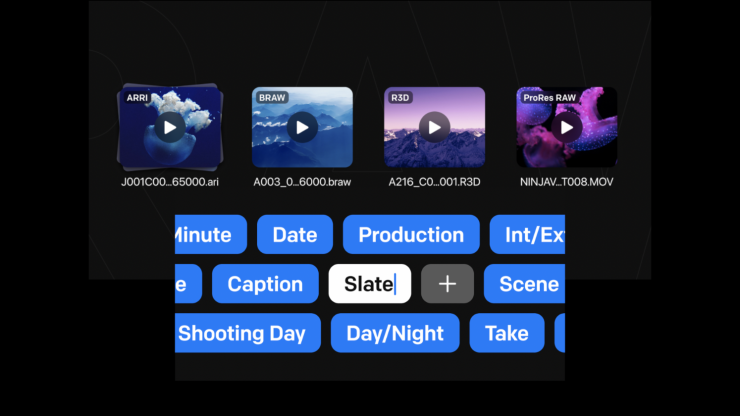 Hedge Elements – Elements are Hedge’s term for the varied and customizable metadata that users can now associate (and keep) with a file to clarify the role of that file to other creative and technical professionals later in the workflow. Hedge Elements is ideal for organizations that need their video files to conform to their organizational structures and procedures, whether ad hoc or rigidly formal.

EditReady RAW – The popular, blazingly fast, and easy to use transcoding application now supports RAW video, including ARRI RAW, Codex HDE, ProRes RAW, and RED R3D, and Blackmagic RAW. The latest release, which is also the first new version of EditReady since it became part of Hedge, solves the problem of converting RAW footage quickly into an editable format.

Canister Spanning – Until Hedge released Canister, an easy-to-use, drag-and-drop interface and cataloguer for LTO, users were held back by an unfriendly, overly technical software experience. Canister has been transformative for LTO users, and now it supports Spanning – the ability to span file transfers across multiple tapes.

EditReady has always been a useful piece of software for when your NLE didn’t support your camera’s codec or container. It allows you to transcode your footage to an editable format, and with this latest update, it can now handle RAW formats.

With so many fast computers and hard drive solutions now on the market, RAW has become a lot more feasible format to work with. The biggest problem is that are so many different RAW formats and various NLE and color grading platforms don’t always support some of them. That’s where EditReady comes in.

RAW files need to be debayered first and foremost. How this is done depends on how the camera manufacturers have designed their RAW formats. EditReady’s RAW implementation goes to great lengths to use the camera manufacturer’s own RAW decoders, and decode video files using each specific cameras’ own Log format. That way, everything that is done with RAW files is intended to give you an accurate, ready-to-edit media file, that reflects the original shooting intent.

Ultimately the aim should be to make a high-quality working derivative of the RAW file that is easy to edit while offering as much flexibility as possible.

If you bought EditReady after Divergent Media joined Hedge in August 2021, the new EditReady is a free upgrade. For all other users, Hedge should have mailed you an upgrade coupon. If you didn’t get an email just open your EditReady and you’ll get a notification.

Each EditReady license is perpetual and comes with a year of guaranteed updates and support. Upgrading an existing license is $39 USD, and adding activations to increase the two activations that come with each license is also $39 USD.

EditReady 22.1 is available for download today. The trial allows for transcoding up to 1 minute of each clip so test it with all your existing footage, for as long as you like.

Coming soon will be Sony Venice & X-OCN support, and then EditReady will be looking at image sequences.

Hedge Elements are custom fields that you can use in a preset and then review before starting a data transfer. Elements is the direct result of a close collaboration with VICE and DPG Media, who have been using a pre-release version in active production for more than a year.

Copy and verification programs are great, however, if the data handler simply drops unorganized media in the media manager’s lap there is still a lot of work to do. Up until today, Presets in Hedge were about streamlining the organization of your media as it got transferred, but productions often require a lot more information, so Hedge has now added metadata.

Metadata means a lot of things to different people and depending on what your job is you only need to see certain customizable metadata. Hedge is calling these customizable metadata types elements. An element can be whatever you want it to be: a static value, something generated, something fetched, or something that requires human input. And it’s the latter that’s by far the most important one as it adds the most context.

Elements allow you to create custom metadata fields to use in your presets, for your folder structure, or simply to add notes so that there’s more context for the people down the line. Hedge wants media managers, data handlers, and creatives to spend less time organizing files before and during an edit. Editors and assistants lose way too much time on administration but could start editing right away if incoming clips had all their information attached before arriving in post-production.

When you define metadata elements in your preset, and use the preset in a data transfer, Hedge will ask you to add information to that transfer.

Review only shows up when it’s needed. If Review pops up it is telling you that you’re required to add some data. If you switch off Presets, Review vanishes again. If your Preset only uses auto-populated elements like timestamps and auto-labels, click a label to review that data.

Canister is Hedge’s archive software that helped transform the industry’s perception of LTO.

Canister’s new Spanning capability allows you to archive more data than will fit on a single tape. There is no longer the need to cut up a hard drive’s contents into parts that fit a single tape, then archive them one by one to different tapes. Instead, just select everything you need and Canister will keep asking for new tapes until all is done.

Users kept asking Hedge for a robust way to do spanning that didn’t rely on a database. A database is typically a single manufacturer’s way of organizing data and that usually means that you can’t take your tapes to another manufacturer’s system, or it’ll be hard to move the data out of the database.

Spanning relies on Canister’s Catalogs which are your tape’s indexes recreated as tiny files on your own computer. That way the file system, the database your OS relies on, does the heavy lifting with zero chance of data corruption or vendor lock-in.

When a file doesn’t fit on a tape most apps will cut a file in two. there is nothing wrong with doing this, but you’ll need the original software to put the parts back together. There’s no use in spanning data across a group of tapes if you can’t find which tapes belong to a group. Canister solves this in a super simple way. When starting a transfer that won’t fit on a single tape, you are first warned, and then asked to specify a label. That label will show up in your Catalogs as a separate tape, with shortcuts to all tapes that make up your spanned catalog.

With a single tape, that’s annoying, but with a transfer spanning multiple tapes, it’s guaranteed madness. Also, with the time it takes to fill up a tape, we think it should be possible to stop a transfer any moment that suits you, to resume it at any later time, even at a different computer or hardware setup.

The second new addition to Canister is Preflight Checks. When you start Canister, a range of tests and probes are fired off, reporting back information about the state of your system. Incorrectly installed extensions are detected, outdated versions reported, and missing components offered, giving you a good overview of what needs to be done to get up and running.

Canister has had the same license model as Hedge’s other apps, where a license is perpetual, cross-platform (if available on more OSs), and comes with a guaranteed year of updates and support.

If you bought a license less than a year ago, you’ll receive this update for free. Everyone else can upgrade their license for $149 USD.