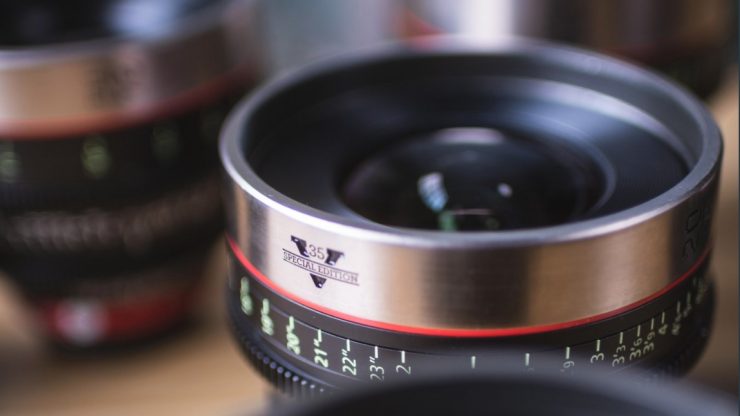 Last month I wrote an article about Northwest Camera Co. and Duclos Lenses offering a retune for Canon CN-E Primes that was claimed to make them more closely resemble the classic Canon K35 primes. Well, now I have some further information.

The Sigma V35 set uses Sigma Cine Prime lenses as the base. Starting with a full 10 lens set, this makes for a very robust set of primes that all cover Full Frame and beyond. Northwest Camera Co and Duclos lenses have taken these lenses and modified them optically to replicate some of the older Lomo Lenses. This means more interesting flares, less contrast, less saturation while retaining neutral skin tones. The original housing is used, however, signature engravings are added to set them apart from the crowd. Adjustments have been made between the front and rear elements making service much easier to maintain.

The Fujinon V35 Zoom Lens uses the Fujinon 19-90 S35 Zoom as the base. The goal was to take this versatile zoom lens and optically modify it to replicate some of the great vintage zooms of the past. This results in more interesting flares, less contrast, and less saturation, all while retaining neutral skin tones. Just like the other V35 projects, the original housing is retained and signature engravings are used.

The goal was simple, to create a look that mimics the K35’s but was still different enough to interest cinematographers. The ‘look’ required the lenses to have wide-open halation, lower contrast, lower saturation, and more interesting flares. The lenses all keep their original same T stops as well.

The recipe for the look is semi-secret, but what I can tell you is that it is a mix of respacing elements and recoating a number of internal elements. The front and rear of the lenses are untouched, which is great in case of accidents. This makes it very easy for a technician to replace just the front or rear without extra work or downtime.

Northwest Camera Co. and Duclos Lenses undertook this project because they felt like it was a great way for rental houses to supplement their K35 sets with a cheaper alternative or give current owners of CN-E sets a new lease on life for their lenses. A lot of rental houses already stock re-housed K-35 lenses that feature modern mechanics.

The biggest upside to these new retuned CN-E primes is that they are much cheaper to own than a K35. They can also be easily serviced or repaired with readily available parts from Canon. Also, since they are modern-day lenses where the base lens comes directly from Canon, there will be much better color matching than what you get with most K35/FD sets. You shouldn’t also overlook that these re-tuned lenses will use Canon’s original housings which are fairly robust with great mechanics and mild weather sealing.

Canon K35 primes are highly sort-after and their prices have exploded over the last 5 years. A five lens set can cost you north of $200,000 USD.

Above you can see footage taken with the Canon V35 lenses. Now, something you need to be aware of is that the above footage is from pre-production lenses and they are still getting fine-tuned. Customers’ sets will have less halation than these lenses currently have.

Canon already has its own range of CN-E Sumire Prime lenses which at first glance, look almost exactly the same as the existing CN-E Prime lenses. They have the same focal lengths, same T-stops, and are almost identical in size and weight. However, the Sumire Prime lenses feature a completely new optical design. They have been designed to have a “softer” look that allows them to create a more organic-looking image.

Canon told me that it’s impossible to replicate a K-35, but if they wanted to they could have made something that was very similar. They told me that they didn’t want to do that and instead they wanted to create a unique lens that was almost a hybrid of the present and the past. The Sumire lenses have the personality and look of older optics, but with a modern twist.

I think here is where the difference lays between the Sumire primes and the re-tuned Northwest Camera Co & Duclos Lenses options. The re-tuned lenses are more closely trying to replicate the K-35’s, while the Sumire’s are not.

I reached out to Northwest camera Co. to ask them how their re-tuned lenses differed from canon’s Sumire. They told me:

‘So, Canon’s Sumire lenses are still based on the CN-E set, and the only real difference happens when you use the lenses wide open, however, this ‘look’ quickly goes away as soon as you stop the lens down to T2.0. This makes it hard to mix and match stops and keep a consistent look. Our re-tuned CN-E primes feature a much bigger optical development than the Sumire.’

How much do they cost?

Northwest Camera Co. & Duclos Lenses are going to be offering two different types of conversion. One with a PL conversion (without data) and another that keeps the standard EF mount.

The current turnaround time is 5-7 weeks from receiving your set.

You can order this upgrade through Northwest Camera Co. and the lenses would be shipped to them, and then shipped back to customers from Duclos.

Just to be crystal clear, those prices are the prices per lens for having the conversion done, they don’t include a CN-E prime. You have to supply your own CN-E primes or you can also buy or finance the regular set through Duclos Lenses and then pay Northwest Camera Co. to do the upgrade.

As far as your warranty is concerned, this retune will most likely void any current warranty, but for a lot of potential customers, their sets are way out of warranty anyway. Duclos and Northwest Camera Co. will be offering a 1-year warranty after purchase for any manufacturer defects related to the build.

Yes, this is still a lot of money to pay, but it is significantly cheaper than trying to purchase K-35 lenses.

There are lots and lots of lens manufacturers and third-party services offering de-tuned or re-tuned versions of lenses. This seems to be a trend that is unlikely to change anytime soon.

It is good to see more options when it comes to lenses and I am glad Northwest camera Co. and Duclos Lenses are trying to do something a little different. Given the popularity of Canon K-35 lenses, there definitely seems to be a market for it.

It is interesting to see that Sigma Cine Primes and the Fujinon Cabrio 19-90 have been added to the V35 Project. In theory, this type of conversion could be done to just about any lens.

What do you about this re-tune of Canon CN-E primes, Sigma Cine Primes, and the Fujinon Cabrio 19-90? Is it something you would consider doing? let us know in the comments section below.

UPDATE: The footage in the article is from pre-production lenses and they are still getting fine-tuned. Customers’ sets will have less halation than these lenses currently have.