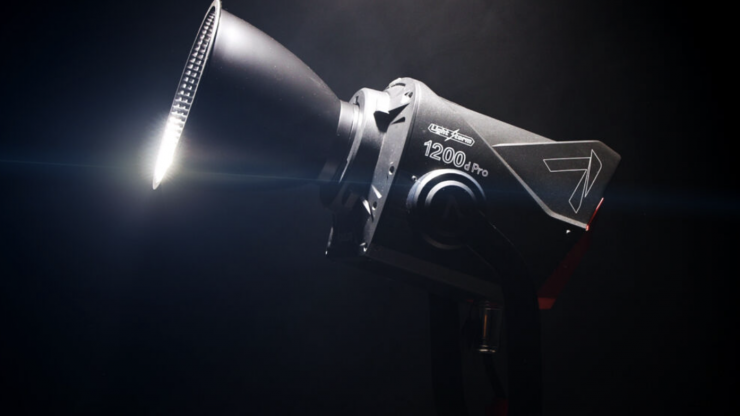 Aputure’s previously announced LS 1200d Pro LED Light is now available to order. This is essentially a larger-sized version of the 600d Pro, with a higher power draw and more output.

The new fixture is a 1200W daylight-balanced COB LED that is designed to compete on the same level as industry-standard Hydrargyrum Medium-Arc Iodide (HMI) lights. It will also be a direct competitor to the Nanlux Evoke 1200 which was released mid-way through the year. I reviewed the Nanlux Evoke 1200 and you can read that review here.

What you also clearly need to remember is that a lot of the Aputure fixtures have a hot spot in the middle when you are using the Hyper Reflectors.

It is interesting to see that Aputure has copied ARRI and decided to bring out a variety of different Hyper Reflectors with varying beam angles. At least with the Aputure light, you get all three Hyper Reflectors as part of the kit and you don’t need to purchase them separately.

The light does utilize a fan and you can set it to the following:

Mounting the light will require larger lighting stands as the LS 1200d Pro features a Junior pin. The light head tips the scales at At 19.73 lbs / 8.94 kg, but I am not sure how much the power supply/controller box weighs.

Like other lights in the Light Storm Pro series, the LS 1200d Pro is weather-resistant and employs waterproof fans, sealed internals, rubber caps for all ports, and weatherproof connectors.

The light also features 0.1% stepless dimming, and it incorporates sACN and Art-net compatibility via an etherCON connector, wireless Lumenradio CRMX, DMX512 5-pin XLR in and out>. Like other Aputure fixtures, you can also control the light using the Sidus Link mobile app.

The LS 1200d Pro LED Light will retail for $3,390.00 USD. While you can pre-order it you may have to wait quiote some time for it to eventaully ship.